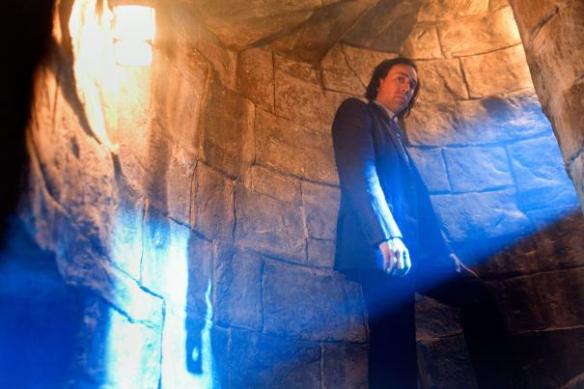 Nicolas Cage wonders if that's the Career Reaper following him.

I’m not sure what it is about assassins that get weary of their job. They always seem to kill only people who deserve it, and when they try to do one last job, things always seem to go horribly wrong for them. It’s enough to make a killer check his 401K.

Joe (Cage) is such an assassin and you can tell he’s tired of his job because, well, he tells us he is. He certainly seems tired; he wanders through Bangkok trying to look cool and tough at the same time but he looks sleepy to me. Maybe it’s his hair – Cage is the king of really bad movie haircuts and this might be his worst yet.

He’s been sent to Bangkok to perform four murders, all of which are meant to look like accidents, which are Joe’s specialty. The crime boss that hires him (Kaljaruek) is provided with a list of requirements; in return, the targets and the information about them are delivered in stainless steel briefcases. The courier is Kong (Yamnaram), a street hustler Joe picks up to be his gofer…or his number one son. You make the call.

As Joe offs three bad guys, he develops a relationship with a blind pharmacist (Yeung) that blossoms into full-blown romance, which is a violation of one of Joe’s rules (it’s a rule that all cinematic assassins have to have a set of rules which in turn get violated during the course of the movie; it’s not the screenwriter’s fault, man – it’s a rule) as is his growing mentor relationship with Kong, who is proving to be no King.

When the fourth and final target pops up, Joe is shocked to find out that it is a politician, one who is particularly loved by the people. This pisses Joe off; he made it very clear that he doesn’t do political. Still, a job’s a job right? Of course not – this job’s a setup. Now Joe’s on the run and to make matters worse, his exit strategy doesn’t provide for people he cares about. Getting out of Bangkok alive has just become very problematic.

I usually like these kinds of movies and I usually like Nicolas Cage in movies, although that has become much harder to do lately. Some of his more recent movies have become a good deal more style than substance, and he has gone from being one of Hollywood’s most bankable stars to being one in danger of becoming a B-movie headliner whose movies as often as not head direct to home video.

The Pang Brothers based this on their own 1999 action movie of the same title. It’s kind of an odd choice for a remake – it wasn’t really one of their better films, and it doesn’t really get much value added to it by being “Hollywood-ized.” To make matters worse, it is very badly underlit and the colors have a washed out tone to them, like someone left the aperture far too open on a home movie.

However, the Pang Brothers are action specialists and some of the sequences (particularly the boat chase and Joe’s escape from an ambush while his paramour walks ahead, completely unaware of the carnage going on behind her) are masterful. That said, the Thai locations used here don’t really give you a sense of the lively nature of Bangkok but nonetheless give you a good idea of the beauty of the city and its environs. If they hadn’t tried to be so stylish, this could have gotten more points for being a good looking film.

As I mentioned earlier, Cage more or less sleepwalks through this, trying an Eastwood-like approach of growling in a low voice while rarely displaying much emotion or feeling. Unfortunately, that works better with a gravelly voice than it does with Cage’s and for the most part, his part is uninspired. However the relationship he has with Kong is one of the movie’s highlights; young Yamnaram does a solid job as Joe’s flunky.

The romantic subplot serves as a distraction and really never goes anywhere anyway. Yeung is very attractive but there’s no real fire or passion in her scenes with Joe; they’re too chaste to really convince me that there’s any sort of heat between them. More convincing is the romance between Kong and a stripper that he becomes fond of. Strangely enough, she becomes the damsel in peril (every movie needs one) rather than Joe’s friend. In retrospect that’s probably a wise decision.

Given the Bangkok location, this could have been a much more exciting, enjoyable film than it was and that’s really a shame. Unfortunately I never really got a reason for this film to be made other than for a quick payday. I never got a sense anyone involved really loved the story nor believed in it. Perhaps that’s why I gave this such a tepid review; that’s more or less how I felt the filmmakers gave to their audience.

WHY RENT THIS: The action sequences are exciting. The relationship between Joe and Kong is believable and dynamic.

WHY RENT SOMETHING ELSE: The “retiring assassin doing his last job” thing has been done to death. The romantic relationship with the blind pharmacist never really goes anywhere nor is it very convincing.

FAMILY VALUES: There’s plenty of violence and a little bit of sexuality. There is also a fair amount of foul language as well. Definitely for older teens and above.

TRIVIAL PURSUIT: The movie was filming in Bangkok during the September 19, 2006 coup d’état. The armory department claims they fired the only shots of the coup. Filming was only interrupted for six hours.

NOTABLE DVD EXTRAS: There is a featurette on the growth of Asian cinema which is a bit shallow but informative nonetheless.

BOX OFFICE PERFORMANCE: $42.5M on a $45M production budget; the movie was a flop.

TOMORROW: The Next Three Days