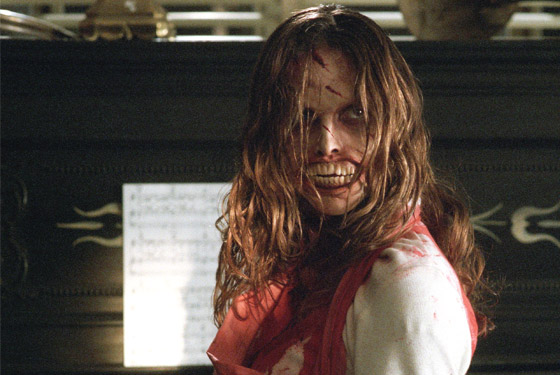 Dental hygiene isn’t always the key to a happy life.

We all do some pretty dumb things when we’re drunk. We say the wrong things to the wrong people, we pick fights, we sleep with people we shouldn’t have – there are very few of us who don’t have some sordid tale of something we did while we were drunk that we later came to regret. I’m pretty certain, however, that nobody has a tale quite like this one.

Harris McKay (Purcell) is back in his hometown for a funeral. His college buddy Chad bit the big one in a car accident and so there’s a reunion of sorts between friends Sid Vance (Thomas) and sultry Kira Hayden (Maran) with whom Harris had a fling with back in the day. The problem is Harris is married now and his wife Allison (Kramer) doesn’t get along well with Kira.

Allison heads back to the hotel room and leaves the three musketeers to get rip-roarin’ drunk. They make their way to a cemetery (as drunks often do) and find a mysterious black envelope with a poem written on a note inside it. Sid reads the poem which indicates that they should celebrate life by dancing on the graves of the dead, which they proceed to do in short order, which Sid punctuates by urinating on a headstone while Kira and Harris make out a little.

They all go back to their lives but something’s wrong. Harris and Allison hear mysterious sounds, and see odd things in the corner of their eye. Over the next few days these happenings get more frequent and more menacing. Sid tells of small fires cropping up at various times and places. Allison thinks it’s Kira trying to get back together with Harris. Harris and Allison go to confront Kira only to find her house a mess and Kira badly hurt, covered with bruises and bite marks and having been sexually assaulted.

They come to the realization that something is happening beyond their understanding or ability to contain, so they do what I’m sure thee and me would do next – they contact a paranormal investigator in the form of Vincent Cochet (Karyo) and his lovely assistant Frances Culpepper (Perry). They determine that the trio set off a curse with their actions and got three vengeful ghosts after them – a child arsonist, an axe murderer and a serial rapist and murderer. Not three haunts I’d want after me for sure.

Worse yet, they have until the next full moon before the wraiths kill the lot of ’em. The only way out of it appears to be to disinter the bodies and re-bury them, thus breaking the curse (don’t ask me how). Trouble is, one of the group has their own hidden agenda and is willing to risk the lives of the whole group to achieve it.

Mendez, the auteur of this finer-than-average horror flick, previously directed The Convent which was another mighty fine horror film. Here you have a movie that’s not blazing new trails, taking bits of Poltergeist here and bits of The Haunting of Hill House there. That’s ok – Mendez puts it all together in a nice appetizing whole, much like making a terrific casserole out of leftovers. That can be as good as gourmet sometimes.

The cast is mostly not well known although Purcell and Karyo have been around. Karyo provides a certain amount of comic relief and Purcell, who has done well in ensemble roles and shows signs of being a pretty good leading man, is palatable here. In fact, most of the acting is pretty solid, a bit better than you’d find in the average horror film.

The special effects are for the most part pretty cool until they get a bit over-the-top in the final reel. In fact, the whole ending is a bit…much. The director on the commentary mentioned they wanted the last part of the movie to be like the big drop on a roller coaster – you’re never sure when it’s coming or how it’s going to hit you but when it arrives it’s still fun. I can agree with that in theory but here they just get ludicrous on you which is a bit sad. A little more imagination with the final real might have made this a bit better. As it is, it’s a much better than average genre film you might have overlooked as it came out in a group of seven other films of differing quality. Scare film fans should check this out; unless you are thoroughly jaded, you won’t be disappointed.

WHY RENT THIS: Balls-out scary in places. Decent performances and effects.

WHY RENT SOMETHING ELSE: Not too many surprises. Ending is a little much.

FAMILY VALUES: The imagery here is graphic and horrifying. There’s plenty of supernatural violence and some sexuality (a rape is implied) as well as a smattering of bad language.

TRIVIAL PURSUIT: Was released as part of the first After Dark Horrorfest: 8 Films to Die For film festival in major markets in 2006.

Chris Carmack finds out that Rachel Miner already has a boyfriend.

One of the more heinous attributes of Hollywood is that they’ll take a movie that has some degree of success and manufacture ultra-low budget direct-to-DVD sequels that often have little to do with the first film and very rarely have any cast members reprising their roles. These films are often bottom of the barrel when it comes to quality and readers should beware when renting them, attracted by the title only.

The Ashton Kutcher sci-fi fantasy movie The Butterfly Effect came out in 2004 and while not a smash success made a moderate profit. Here, the two films have little in common except the lead character is able to travel through time at will, as long as he can see a picture of the place he wants to travel to. Here, the character is Sam Reide (Carmack) who poses as a psychic. He travels back in time, sees the crime happen, then returns to tell the police who did it. Detective Glenn (Lynch) has an impressive arrest record thanks to Sam.

Sam is aided in this by his sister Jenna (Miner). Time traveling is dangerous; it amps Sam’s body temperature up, so much so that he must time travel from a bathtub filled with ice cubes. Jenna monitors his vital signs to make sure Sam doesn’t cook himself alive while time travelling.

Sam and Jenna are very close and they have a reason to be; Sam time traveled to save Jenna in a house fire. As usually happens when the past is altered, there is a heavy cost. The act of saving Jenna caused their parents to perish in the fire. Since then, Sam is under strict orders – as nagged to by his mentor Goldburg (Yon) – to use his powers to observe, not affect.

However this all changes when Elizabeth (Habel), the sister of Sam’s murdered girlfriend Rebecca (Serafino), approaches Sam convinced that the man on Death Row accused of the murder, Lonnie Flemmonds (Wilkinson) is innocent. Sam is reluctant to go back, and Goldburg reinforces this but Sam is obviously shaken by the encounter, so much so that he has some wild sex with the bartender Vicki (Jones).

He ultimately changes his mind and goes back, determined to prevent the murder despite the protestations of his sister and Goldburg. While there, he sees a drunken Elizabeth in her car outside Rebecca’s apartment and orders her to stay in the car. He goes into the house and finds he is too late to save Rebecca; while he’s in the apartment Elizabeth is attacked and murdered in her car.

Thus it goes, with the smallest of events leading to catastrophic consequences. That’s nothing new; it was explored in more clever ways in the first movie (the second, a direct-to-video disaster from 2006, was even worse than this one is). The saving grace for the movie is its inclusion of the police procedural into the sci-fi fantasy mix.

The acting here is atrocious, with Rachel Miner the only “name” actress in the cast. She does okay but frankly isn’t given a lot to work with. I hope the check cleared at least. Most of the rest of the cast commits the cardinal sin: they act like they’re acting. They speak in cadences no real human being speaks in, and while the dialogue they’re given to say is pretty craptacular, I can’t say they even do it justice, and that’s pretty bad.

The action sequences, such as they are, are handled well enough but to be honest, there really isn’t much to recommend the movie. As it is, if you’re into sci-fi and fantasy and you liked the first movie, you might be moved to see this one. Be warned; chances are you won’t like it. That’s too bad; the series has an interesting conceit and with a little imagination can make for some fine entertainment.

Generally, most of the movies in the After Dark series range from okay to really good. Unfortunately, they appear to be running into a dry well. Perhaps it’s time for a year off in order to stockpile some movies that live up to the ones from the first two festivals.

WHY RENT THIS: An intriguing procedural that, if nothing else at least gives some variation to the series.

WHY RENT SOMETHING ELSE: Poorly acted, poorly written and the end “revelation” isn’t much of a twist and it just makes you go “ewwwwwww!”

TRIVIAL PURSUIT: This came out as part of the After Dark Film Festival III, the “Eight Films to Die For” for 2009. This remains the horror film festival in the world based on attendance and number of venues.