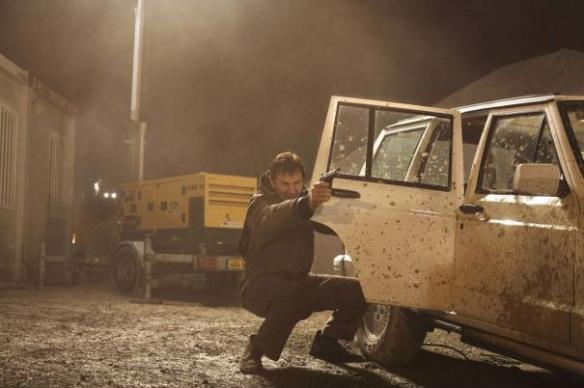 Liam Neeson takes time to do his squats during a firefight; after all, a spy's gotta stay in shape.

When it comes to France, there are some things that you can take as absolute facts that are undeniable. One, that the Eifel Tower will always be the symbol of Paris. Two, that you will eat better at any sidewalk bistro than you will in all the fast food purveyors in America. Finally, that Luc Besson knows how to make a good action movie and will churn one out year after year after year.

In this Besson-produced thriller, Bryan Mills (Neeson) used to work for the CIA. He was, in his own terminology, a “fixer,” the kind of guy who would be sent in to stop a problem before it starts, whether by a timely assassination, a daring theft or a campaign of disinformation. Not that the CIA doesn’t engage in such things but I don’t get the impression they do that kind of work all that often.

Anyway, as will often happen with interesting jobs, Mills’ job becomes his life and his wife (Janssen) packs up and leaves, taking their 17-year-old daughter (Grace) with her. Not long after, she marries a mega-rich American industrialist (Berkeley) whose idea of a birthday gift is not just a pony but a future Kentucky Derby winner. It’s kind of hard to compete with that when all you have to give is a karaoke machine.

Mills decides to hang up his black ops jumpsuit and move to the States to be closer to his daughter but his bitchy wife prevents this at almost every turn. Mills the suave icy-cool spy quickly becomes the hangdog intimidated ex-husband who meekly accepts the crap his ex-wife hands him and sits at home counting the hours until he can spend time with his daughter. Hard to believe a man of action such as Mills would settle for this kind of role, but okay.

When his daughter Kim (Grace) phones up dad to set up a one-on-one lunch (just the two of them), Mills is overjoyed – until he finds out that bitchy ex-wife used this as a means to get him to sign a parental consent form allowing Kim to spend the summer in Paris with her friend Amanda (Cassidy) unsupervised, although Kim swears up and down that adult cousins of Amanda will be there to act as chaperones. After some misgivings, Mills gives in.

Of course his misgivings prove to be well-founded. Soon after his daughter lands in Paris, Mills gets a phone call letting him know she’s landed safe and sound – and hears the kidnapping of his daughter over the phone. When one of the kidnappers picks up the phone, Mills tells him in a quiet, calm voice that he doesn’t have money to pay ransom but what he does have is a particular set of skills that would make life unpleasant for his crew and that if he doesn’t turn his daughter back over to him, he will find him and kill him. The bemused kidnapper responds with a single sneered “good luck,” done in a fine Clint Eastwood-like snarling whisper.

From this single two word message, Mills’ buddies at the CIA are able to determine the identity of the kidnapper, his nationality, and that the gang that he’s affiliated with specializes in kidnapping naïve young women and selling them as sex slaves and prostitutes to wealthy men (if they were really that amazing, Bin Laden would have been in a body bag long ago). Oh, and that once 96 hours have passed, his chances for finding his daughter go down to zero. His ex-wife’s new husband sticks Mills on a private jet for Paris where, as you might guess, much mayhem ensues. The only thing missing is the Eifel Tower crumbling to the ground in a graceful swan dive.

Besson protégé Morel does a fine job of pacing the film, particularly during its second half when the action portion of the movie really kicks in. Quite frankly, Paris makes an excellent backdrop to the action sequences as well, so that works in the filmmakers’ favor. Besson delivers a script that mostly works.

It does get a little out to left field from time to time in terms of its internal logic. However, what saves the movie is Neeson. Neeson’s acting chops are beyond question; his work in such films as Schindler’s List and Michael Collins corroborate that. He gives the character a sense of gravitas. Mills is a killing machine, capable of demolition, sharpshooting, lethal hand-to-hand combat and driving like Remy Julienne but he is, at the core, just a sad dad who just wants to see his kid.

The support cast is mostly solid although unremarkable enough. They do their jobs without distinguishing themselves any, leaving Neeson and the action to take center stage which is probably a good thing. The movie was a surprise hit when it was released in January 2009 and not without reason; it also got some pretty impressive critical props.

Action movies work best when you try not to think about them logically but rather just sit back and enjoy the ride. Taken is kicked up a notch in the thoughtfulness department (mostly due to Neeson) but it doesn’t sacrifice one inch of its action pedigree. Mindless entertainment, yes but good mindless entertainment.

WHY RENT THIS: Liam Neeson makes for a natural action star, lending gravitas to his physical skills. The film moves with breakneck pacing, something crucial for a good action movie.

WHY RENT SOMETHING ELSE: Occasionally veers into the realm of the preposterous but then again, so do most action movies.

FAMILY VALUES: There’s a good deal of violence and sexual situations, with the depiction of many girls presumably drugged and raped (at least implied). The language is pretty rough, so all in all not for youngsters.

TRIVIAL PURSUIT: The martial arts style used by Mills in the film is called Nagasu Do, a hybrid blending Ju-Jitsu, Judo and Aikido. Liam Neeson was trained by SAS soldier Mick Gould for his various skills.

NOTABLE DVD EXTRAS: The “Black Ops Field Manual,” available only on the Blu-Ray edition of the release, keeps a running count of the injuries and kills during the movie, displays a clock telling how much time Bryan has left to find his daughter and shows you his exact route from one scene to the next. It’s a good deal of fun!