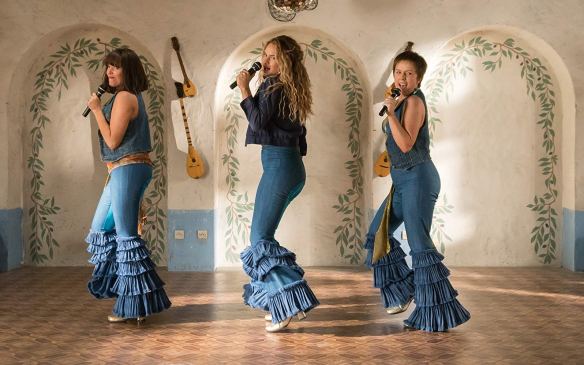 They’re with the band.

I have to confess that I’ve always had a soft spot for the music of ABBA, the Swedish pop group that lit up the charts in the 70s and 80s. Mamma Mia, the musical that utilized the band’s extensive catalogue of hits to celebrate a young girl’s wedding as she tries to figure out which of three possibilities is her biological father. It was a major hit – in 2008. Ten years almost to the day, the sequel arrives.

In it, Sophie (Seyfried), the bride from the first film, is trying to renovate her mother’s Greek Island hotel. Her mamma Donna (Streep) has passed away and poor Sophie is trying to balance mourning for her mom, getting the hotel ready for opening night and dealing with a rocky relationship (she’s separated from husband Sky (Cooper) although she is pregnant). With nearly everyone from the first film returning, along with Cher as Donna’s estranged mom and Andy Garcia as the hotel’s manager, there is a familiarity about the terrain. There are also flashbacks showing Donna’s shenanigans leading to her coming to the Greek islands and getting involved with three different men. The luminescent Lily James plays the younger Donna and she does a terrific job, but she’s no Meryl Streep and the film feels her absence keenly. Streep does return for the most haunting scene in the film as a benevolent ghost observing her granddaughter’s christening.

The plot is essentially an excuse for the musical numbers which I suppose could be said for some classic musicals as well, but here it seems especially glaring. Part of the reason is that the bulk of ABBA’s better-known hits were used in the first film and much of the soundtrack here is made up of album tracks and B-sides so the movie loses much of the familiarity factor that made the first film charming.

Streep’s scene and Cher’s two musical numbers are both the showstoppers here; most of the other numbers are forgettable and kind of repetitive. Also, the beautiful Greek island location of the first film has been swapped out for Croatia in the second; not quite the same. I just didn’t get the same warm fuzzies I got from the first film, more’s the pity. There’s definitely a market for this and I know my wife and son thoroughly enjoyed this way more than I did; however, I found it to be only minimally entertaining at best.