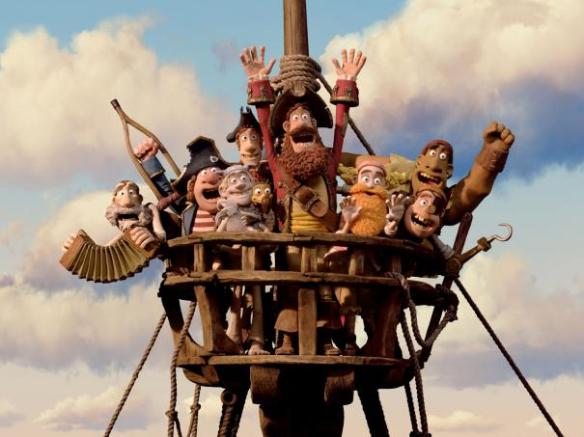 THE PIRATES! BAND OF MISFITS

The twisted minds at Aardman Animation, purveyors of the Wallace and Gromit cartoons as well as such features as Arthur Christmas, Chicken Run and Flushed Away take to the high seas for their latest feature. Here, a somewhat inept but enthusiastic Pirate Captain yearns the one prize that has eluded him over his career – the Pirate of the Year award. He must battle fierce rivals such as Black Bellamy and Cutlass Liz but also Queen Victoria who wants to eradicate all pirates – forever! What’s a scurvy dog to do?

See the trailer, a featurette and a promo here.

Rating: PG (for mild action, rude humor and some language)

(Universal) Jason Segel, Emily Blunt, Alison Brie, Rhys Ifans. When a young couple gets engaged, the plans for their wedding take up all of their attention. So when she gets a job out of town, they decide to postpone, setting off a chain of events that keep their wedding being put off and put off until their relationship is threatened.

(Sony Classics) Shlomo Bar Aba, Lior Ashkenazi, Alisa Rosen, Alma Zak. A respected Talmudic scholar whose father is bitter at being cast in his son’s shadow and for having his own research passed over for years finally wins the Israel Award, one of the highest honors in the Israeli academic world. However the son discovers that the award was meant for him and not for his father but can’t bring himself to correct the mistake. So he plays along, discovering things about both his father and himself he’d never have guessed at.

(Relativity) John Cusack, Luke Evans, Alice Eve, Brendan Gleeson.  A literate young Baltimore detective discovers that a series of murders seem to have been inspired by the works of an up-and-coming young author – Edgar Allan Poe. The detective enlists the writer to try and get inside the mind of the killer but this only escalates the stakes as Poe’s love is deemed to be the killer’s next target.

See the trailer, interviews, promos, a clip and a featurette here.

(Lionsgate) Jason Statham, Anson Mount, Chris Sarandon, Catherine Chan. A disgraced detective whose meddling into the affairs of the Russian mob got his family killed and a stigma placed on him – that anyone he knows will be murdered by the mob – spies a young Asian girl being threatened by the mob and is moved to intervene. He discovers that the girl has a talent for memorizing long numbers and holds in her mind a number that not only the Russian mob but also the Chinese mob and the police want very badly. It will be up to protect her from the multitude of crooks and crooked cops out to get the two of them and achieve some kind of redemption.

See the trailer and a promo here.

Rating: R (for strong violence throughout, and for language)

(Eros Entertainment) Anil Kapoor, Ajay Devgn, Borman Irani, Phillip Martin Brown. A counter-terrorism expert and a desperate man are pitted against each other on a high speed train rocketing from Glasgow to London. Only one will succeed in their objectives and hundreds of lives hang in the balance.