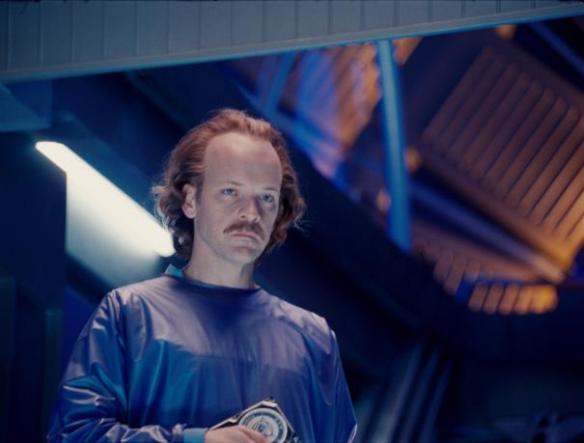 Peter Sarsgaard discovers that a major supporting role in a franchise film can lead to a big head.

The obvious and cheap line is that it isn’t easy being green. The Green Lantern is one of the most powerful figures in the DC comic book universe but never gets the respect or love of the heaviest hitters for the brand. In fact, none of the DC heroes other than Batman and Superman have found much success on the big screen, and this movie looked to finally get the DC brand on the same track that the Marvel brand has been on for more than a decade. Did it succeed?

Hal Jordan (Reynolds) is a cocky test pilot for Ferris Aviation. He has had an on-again, off-again (at the moment, off-again) romance with Carol Ferris (Lively), the daughter of CEO Carl Ferris (Sanders) and Not a Bad Pilot Herself. Jordan is a bit of a screw-up, one who has alienated his brothers (but not his nephew who idolizes him) and has just messed up a potentially lucrative government contract that has been ushered through by Senator Hammond (Robbins) by defeating some robotic drone aircraft that were thought to be unbeatable by violating the rules of engagement, a real no-no.

Meanwhile, out in the universe, the Guardians of Oa, a blue-skinned Yoda-like race, have created the Green Lantern Corps, a sort of cosmic Interpol. Each Green Lantern derives his power from the green light of willpower, which is channeled through their ring and allows them to convert thought to matter. They are given a sector of the universe to patrol.

One of their greatest warriors, Abin Sur (Morrison) once captured a being called ‘Parallax (Brown) who operates on the yellow power of fear. When Parallax is accidentally set free, he annihilates entire worlds in order to get at Abin Sur. The two battle and Abin Sur, mortally wounded, heads to the nearest planet – you guessed it, Earth – to pass on his ring to a worthy successor. Can you guess who the ring finds?

Jordan is summoned to Oa to train with Tomar-Re (Rush), a bird-like alien and Kilowog (Duncan) a hulking creature that looks like it eats Bigfoot for breakfast. However Sinestro (Strong) doesn’t hold out much hope that the human can overcome his own shortcomings to defeat Parallax who is on his way to wipe out Earth.

The reason Parallax – now kind of an octopus made up of brown smoke with a skull for a head – is making a bee-line for our world is that scientist Hector Hammond (Sarsgaard) has been infected with some of Parallax’s residual fear energy and has become something of a big-skulled big-brained villain who has the hots for Carol Ferris and a big time jealous rage over Hal.

Hal on the other hand doesn’t think he’s up to the task. A Green Lantern should be fearless and Hal has a lot of fear, quite frankly – mostly of failure. As a child, he watched his dad die in a plane crash before his eyes. Ever since, he’s been trying to live up to the legacy of a father who knew no fear and was the epitome of a hero. Hal is going to have to channel that kind of inner hero if he is to save the Earth.

Director Campbell has plenty of experience with big budget franchise movies, having helmed two movies each of the James Bond and Zorro series. His job here is to introduce non-fans to the Green Lantern universe while at the same time not alienating the existing fan base of the hero.

He doesn’t quite succeed on either count. The backstory of the Green Lantern mythos is complex and doesn’t lend itself to easy summation. While he departs from comic book canon somewhat during the course of the film, it isn’t enough where he should be alienating the fans of the series much. The place where they have been kicking up a fuss is over the uniform of the Green Lantern, which is computer generated and to be quite honest, doesn’t look very realistic. This was a bit of a misfire.

Another was the casting of Reynolds, who is a very good actor with a flippant side. However, the elements that make Reynolds the near-perfect choice for Deadpool (a Marvel superhero who is due a movie of his own and appeared in X-Men Origins: Wolverine) are the same reasons that make him wrong for Jordan, who was more of an archetypical hero in the comics – nearly fearless and somewhat more straightlaced. Most of the best stories about Jordan are the ones that put him in extreme emotional duress, such as the “Emerald Twilight” storyline. Here, he comes off as a reject from Top Gun and it feels like the wrong fit here.

Lively can be an arresting actress but here she isn’t given much to do but be Goose to Reynolds’ Maverick. She is one of the more interesting characters in the Green Lantern universe and she’s certainly given short shrift here. If there are to be any sequels, hopefully her strength will take a front seat. Waititi, as techie Tom Kalmaku (also a character from the comics) at least makes an impression.

The planet Oa is impressively rendered, although it is terribly underlit which makes the 3D effects darker still and the movie look like it was filmed during a brown-out. Apparently it’s always the middle of the night on Oa.

This movie had insane potential and it really makes me sad to say that it doesn’t live up to it. However, don’t mistake that for a warning to stay away at all costs. Many of the mainstream reviewers who took a crack at the movie seemed to have a hard time with the backstory, deriding it as preposterous and juvenile. First of all, this is based on a comic book – not Shakespeare. There’s supposed to be an element of wonder to it. At times, Green Lantern achieves that. Unfortunately, not as much as it should have.

REASONS TO GO: It’s great to see a DC hero onscreen that isn’t Superman or Batman.

REASONS TO STAY: Reynolds is miscast. Some of the Oa sequences are too underlit, making the 3D additionally annoying.

FAMILY VALUES: There are some fairly intense scenes of action and violence in a sci-fi medium.

TRIVIAL PURSUIT: The film’s plot is based on the comic book stories “Emerald Dawn” and “Secret Origins.” The song Hal and Carol dance to, the Fleetwoods’ “Come Softly to Me,” was released in 1959, the same year the comic book Jordan made his debut.

HOME OR THEATER: The outer space vistas of Oa need to be seen on a big screen.