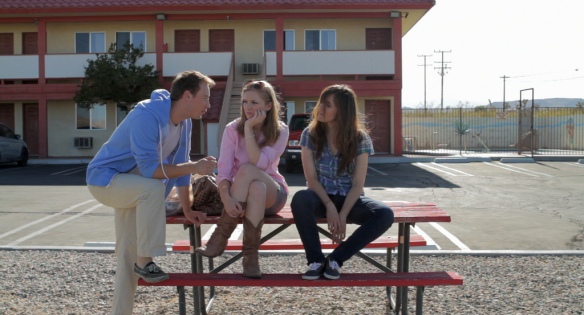 This road trip is no picnic.

Pete (Mider) is minding his own business, eating pizza in his apartment after a hard day’s work when who barges in but his neighbor Sophie (Wells), an actress. However, she doesn’t realize she’s barged in – she’s too busy making out passionately with her hookup du jour and thinks she’s in her own apartment. After Pete clears his throat, HDJ heads into the bathroom and Sophie hears him tell his friends he’ll be joining them in about 15 minutes after he’s done. Sophie decides that’s an offer that she can pretty much pass up without a problem.

After an audition for a hot dog commercial doesn’t go as well as she might have hoped, she decides to hang out with Pete whom she knows only marginally. His carpet is quite comfortable as it turns out and she is loathe to leave it. Pete says offhandedly “Since you’re going to be here anyway, we might as well get married.” I know, lame, right? Still from such small acorns mighty oaks may grow.

Sadly for Sophie, Pete has to run an errand and Sophie decides to tag along. The errand turns out to be a six hour drive from L.A. to Phoenix to pick up Pete’s sister Jess (Bauer) from college. On the way there, to a killer indie rock soundtrack, Pete and Sophie decide Pete’s marriage proposal wasn’t a bad idea at all. Voila, they’re engaged!

Jess is rightfully incredulous at her brother’s newfound relationship status and incredulity grows into downright hostility when she discovers how long the happy couple have been together. Jess, who was been in a relationship with a promising baseball player whom Pete worshipped for awhile, also has a relationship status change of her own – she’s gone from “involved” to “it’s complicated” to “single.” It’s times like these when you really need Facebook to let everyone know what’s going on.

A previous mishap involving an armadillo leads to the proverbial car breakdown in the desert, stranding them in a town so small that even the one horse has grown bored and hitchhiked to L.A. Sophie gets the surprising news that she got the part in the commercial after all and has to be in L.A. in two days to shoot it. When Pete gets into a fight with a local hitting on his fiancée (after said fiancée eggs him on) , Pete and Sophie head back to the hotel for some awkward cuddling while Jess finds herself a bearded guy to hang out with. When she doesn’t come back to the hotel room, Pete and Sophie go on a desperate search, the clock ticking on Sophie’s job all the while.

If you see enough independent films, you are going to find this not only familiar but downright “been there done that.” It has enough indie clichés to fill a hipster film festival; the cute couple acting zany and childish, the indie rock soundtrack that substitutes for a Greek chorus, the young people at least one of whom is an artist marching to their own drummer and so on. Throw in the clichés of modern romantic comedies and you have a case of cliché overload.

The young cast is actually quite good and have some decent chemistry – Mider and Wells both attended the University of Texas with the co-directors, so they have known each other awhile. That serves them well in terms of their banter and interaction. The script relies heavily on charm and has its share of funny moments.

The biggest problem here is that after awhile you start feeling the distinct need to stand up in your seat, shake your fist at the screen and scream at the top of your lungs “REAL PEOPLE DON’T ACT THIS WAY!!!” And they don’t. Personally, I think the film would have been far more effective if they’d chosen instead to make the whole marriage thing a running joke between Sophie and Pete which gradually becomes something real. Instead, you get the sense that these are two dim bulbs who think that marriage and relationships leading to marriage are something so easy you can just snap your fingers and it happens. Jess gets it but you get the sense that she’s a lone voice crying in the wilderness. Thus.

I do think Green and Leffler have some decent instincts but they need to find their own voice. The movie relies too much on established indie moves, so much so that the few moves of its own that it shows are kind of lost in the shuffle. A movie like this one hits the target more readily if you can recognize the characters in it. Instead, we get the hoary old indie song and dance about 20-something hipsters trying to impress somebody with how spontaneous they are. I get that I sound like a “Get off My Lawn, you young punks” critic but I don’t have a problem with spontaneity or young people – I have a problem with those elements in a movie are not given enough thought or depth to make the movie resonate better.

Incidentally, the movie remains on the festival circuit for the time being. A VOD and home video release has been scheduled. You can pre-order the movie on DVD/Blu-Ray beginning on May 1 by clicking on the photo which will take you to the movie’s website.

REASONS TO GO: Some decent laughs. Attractive leads with lots of potential.

REASONS TO STAY: Too many indie-cute clichés. Characters not acting like real people. Predictable

TRIVIAL PURSUIT: Wells joined the cast of Saturday Night Live this season as a featured player.