One of the watershed moments of the last five years is the September 11, 2012 attack on the U.S. temporary embassy in Benghazi, Libya. Three people were killed, including Ambassador Christopher Stevens. Since then, it has been used as a rallying point for the right to display the incompetence of the current administration and to place themselves in the role as advocates for the victims. The left has come to see the attack as something of a conservative media Judas goat in which facts are obscured or downright fabricated for the sake of scoring political points, particularly against presidential candidate Hilary Clinton who was Secretary of State at the time.

The movie is based on the accounts of three members of the Global Response Staff, the private contractors employed by the CIA to protect agency installations worldwide. The GRS is mainly made up of ex-military members. Jack Silva (Krasinski), a veteran of GRS tours of duty, arrives in Benghazi to find a city in chaos. Their longtime military dictator, Moammar Qaddafi had fallen and the government was struggling to keep order. The city of Benghazi was essentially ruled by competing militias of which the 17-Feb was most closely allied with American interests.

Included in the six man team protecting the Annex, the CIA installation a mile from the embassy, was Tyrone “Rone” Woods (Dale), his good friend and commanding officer; Mark “Oz” Geist (Martini), Dave “Boon” Benton (Denman) – the team sniper, John “Tig” Tiegen (Fumusa) and Kris “Tonto” Paronto (Schreiber). The station manager, known only as “The Chief” (Constabile), seems annoyed by the presence of the security professionals and warns them against engaging with the locals. Even though tensions are high, the men have a lot of down time to think about their families and their choices to serve their country so far from home.

As the anniversary of the attack of 9/11 nears, Ambassador Chris Stevens (Letscher) arrives with a small Diplomatic Services security team with the aim of strengthening U.S./Libya relations. Despite security worries on the part of the GRS team, he is determined to stay at the temporary embassy which is a security nightmare defended mostly by members of the 17-Feb militia. When after darkness falls an attack on the embassy is made by militants, the militia runs for their lives and the embassy is left wide open for attack. The GRS team wants to head over there to rescue those who are being overrun but The Chief refuses to allow them to go, unwilling to let the Annex go undefended. However, as it became clear that those at the Embassy were in mortal danger, the GRS team elected to mount a rescue mission, realizing that the militants might well follow them back to the Annex and mount an attack there as well.

Bay is known for his big budget special effects extravaganza and while there are some well-choreographed combat sequences, this is a much smaller scale than we’re used to seeing from him. In some ways you get the sense that he tends to be better suited for the Transformers-style action epics, but he handles the scale here pretty well although there doesn’t seem to be a ton of character development. I had a hard time differentiating the GRS team from each other (there are also other GRS operatives who show up later, including Glen “Bub” Doherty (Stephens) who also perished in the attack. There is a lot of gung-ho testosterone bonding among the men, which is to be expected.

The filmmakers took great pains to recreate the embassy and annex in Malta, and the combat sequences look pretty darn realistic from my uneducated point of view. Those sequences are pretty terrifying as it must have been for those inside both compounds. I would have been the one balled up in a corner weeping for my mommy. I can’t imagine living through something like that.

What was unexpected for me was the emotional impact of the film, and that has more to do with the significance of the event rather than Bay’s skills as a filmmaker. I can imagine that if the characters were a little more drawn up I would have cared a great deal more and the film would have had even more resonance. As it is you leave the movie feeling genuine grief for those who didn’t make it, as well as admiration for those who did.

Earlier I discussed the politicization of the event and it bears discussion here. Much of how you see this film is likely to be colored by your politics. Some critics of a right-wing leaning have overpraised the film (in my opinion) while other critics of a left-wing leaning have been unduly harsh (again in my opinion). I think that Bay went out of his way to make the movie apolitical, but let’s face it; making the film at all was a political statement. As best I can, I tried to leave my political hat out of it and tried to judge the film purely on entertainment value, and found that this is a solid, better than average movie that in a season when most of the offerings out there are pretty awful, can be recommended with little reservation although again, you’ll tend to see this movie viewed through the lens of your political outlook. As long as that’s duly noted, you should be okay.

REASONS TO GO: A very realistic account. A powerful emotional experience.
REASONS TO STAY: Politicization or the events may inform your perspective. Not a lot of character development.
FAMILY VALUES: Plenty of combat-style violence, rough language and some images of bloody carnage.
TRIVIAL PURSUIT: Krasinski, Denman and Constabile all starred on the hit sitcom The Office.
CRITICAL MASS: As of 2/6/16: Rotten Tomatoes: 55% positive reviews. Metacritic: 48/100.
COMPARISON SHOPPING: American Sniper
FINAL RATING: 6.5/10
NEXT: The Finest Hours 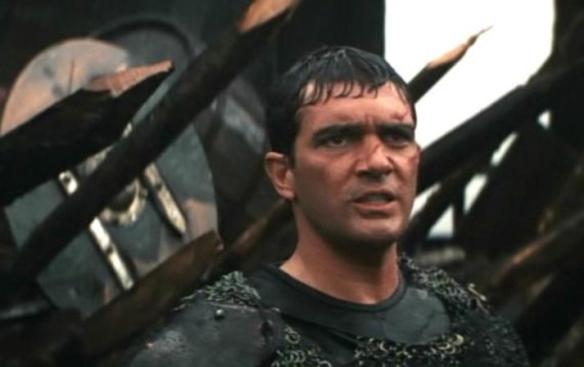 No puss, no boots.

The late Michael Crichton’s books have had an uneven history on the screen, ranging from the classic (Jurassic Park, The Andromeda Strain) to the mediocre (Sphere, The Terminal Man) to the downright awful (Congo).

The 13th Warrior, directed by John McTiernan and based on Crichton’s Eaters of the Dead, isn’t a classic. But the movie, which tanked at the box office when it was released in 1999, is a surprisingly good adventure flick and well worth some viewing time.

Ahmed Ibn Fahdlan (Banderas) is a poet living in 12th Century Baghdad who runs afoul of the local caliph when he has an eye-to-eye dalliance with another man’s wife. For his indiscretion, the impetuous Ahmed is sentenced to be ambassador to the barbarous Norsemen. Accompanied by his old friend Melchisidek (Sharif), he arrives in the encampment of the Norse king – just in time to witness the old king’s funeral.

The brooding new king Buliwyf (Kulich) accepts the new emissary into his camp albeit begrudgingly. However, all is upset by the arrival of a courier who brings a call for help from a neighboring king whose people are being slaughtered by mysterious, seemingly demonic killers. Buliwyf consults a seer, who tells him that only 13 warriors must go. Quickly, 13 strapping warriors, led by their king, volunteer for the quest; but the seer admonishes that the 13th warrior must not be from the Northlands.

So, Ahmed is volunteered. Along the way to the embattled kingdom, Ahmed goes from being the butt of the band’s jokes to being a respected member of the cadre; he even manages to learn their language by a means that is delivered to the screen in a particularly imaginative way.

Once they arrive at the beset city, they are confronted by seemingly bear-like creatures who turn out to be a tribe of men – bear cultists. The heroic band of fighters bond amongst themselves, fight their implacable foes and the political intrigue of the kingdom they have traveled to, and sow courage, sacrifice and honor – qualities rarely seen in the movies these days.

The scenery here is gorgeous; the mists and shadows of the North make for compelling cinematography. The acting is solid; the Vikings are hearty and likable much in the way they are stereotyped in our culture. Banderas’ Ahmed is cultured and debonair, but is also brave and lethal. He is referred to by his mates as “little brother” and he is indeed brother to the honest and open Norse. His strength isn’t just in his muscles but in his heart, which his commander recognizes is the place where strength counts the most.

Banderas, post-Zorro, was looking to settle into an action hero role but the movie’s box office failure scuttled that career for him essentially – while he has continued to do action roles off and on since then, he’s tended to do more dramas and romantic comedies than anything else which was a bit of a shame – I thought he had great potential to help revitalize the moribund action hero role. Sharif made a rare but welcome appearance in the film – it’s a crime that Hollywood never really utilized this marvelous and charismatic actor more often after the 60s.

The 13th Warrior is a throwback film in many ways. It honors virtues that moviegoers since the antihero days of the 1970s have tended to disdain. We look for our heroes to be flawed so we can relate to them, rather than role models who inspire us to be something better. Ahmed is the kind of hero worth aspiring to – not to mention a rare portrayal of an Arabic character that is positive and strong. Now that’s something I’m all for.

WHY RENT SOMETHING ELSE: Somewhat muddled in places. Sluggish and slow-paced.

TRIVIAL PURSUITS: During test screenings of the film, the scores were so low that the film was deemed unwatchable; Crichton took over directing reshoots which nearly doubled the budget and delayed the movie by more than a year.