Did video kill the movie star?

It is somewhat ironic that the first Wonder Woman took place during the waning days of World War I which saw the world (although not depicted in the film) struggling with a global pandemic of the Spanish flu. The sequel has finally made it to theaters (and to streaming platform HBO Max until January 26th) after being delayed more than a year, argely due to the current global pandemic.

It is 1984 – morning in America, right? – and Diana Prince (Gadot) – the alter ego of Wonder Woman – still mourns the death of her love Steve Trevor (Pine) in an explosion at the conclusion of the Great War. She has managed to lie low for the intervening years, occasionally showing up in costume to foil a mall robbery. She works in the antiquities department of the Smithsonian, along with a new colleague, the confidence-challenged and somewhat clumsy Barbara Minerva (Wiig). The two become friends, and work on identifying a strange artifact – it turns out to be the Dreamstone, a magic relic that grants wishes to the bearer.

Before they realize it though, the two women each make a wish – Minerva to be more like her new friend Diana, and Diana to regain her dead boyfriend. Each woman receives exactly what they wish for – and in Minerva’s case, she also inherits Wonder Woman’s powers. Steve returns, his consciousness inhabiting the body of a handsome man (Palaha). At first, the two are happy.

Television huckster Maxwell Lord (Pascal), a cross between Gordon Gekko, Tony Robbins and Donald Trump, gets wind of the stone and decides to use it to become the dreamstone himself – with the power to grant wishes to whomever touches him. With a steady income of well-wishers, his failing business is turned around and Lord becomes a wealthy man in fact instead of just an illusion.

However, the Dreamstone was actually the creation of the God of Lies and it has a terrible downside – it takes from the user as much as it gives. When the President of the United States (ostemsibly Reagan) wishes for more nukes, the world is brought to the brink of destruction, unless Diana can find a way to stop it.

In many ways, this is a worthy successor to the first Wonder Woman and in others, it is disappointing. Gadot has proven herself perfectly cast as the Amazonian superheroine; beautiful and exotic, graceful in her action sequences, and possessed of a strength and confidence that makes her a tremendous role model for sure, but also not incidentally, a budding A-list movie star. She is quite frankly the reason to see this film; she’s spectacular in the part.

Pine is second banana here, and he seems comfortable in the role. He serves mainly as fish-out-of-water comic relief, evincing awe at period technology (the space shuttle, computers and cheese in a can. He kind of gets lost in the shuffle here; Wiig shows some real dramatic skill as Minerva, going from a put-upon, mousy nobody to a self-confident supervillain. The transition is not as jarring as you might think. Pascal as the huckster Maxwell Lord, is surprisingly bland; the part certainly shows some Trumpian overtones, but in the end Lord seems to have more of a heart than Trump, or at least so it seems. Still, I would have expected more spice out of Pascal.

There are some really great moments here – like a flight through fireworks – and some truly head-scratching moments as well. The opening prologue, set when Diana was a girl (Aspell) in a competition with fully grown women, nearly lost me at the get-go, while the shoot-out at the mall really made me wonder if I wasn’t about to watch Jenkins bomb after doing so well with her last film. Not to worry though; it does get much better as it goes along.

There has been a lot of chatter on the Internet about a sex scene with the resurrected Steve Trevor and Diana. As Steve was inhabiting another man’s body, some people complained that this was essentially rape as the man whose body Steve was inhabiting couldn’t give consent. Far be it for me to besmirch sexual assault in any form, but could it be we’re getting oversensitive? I don’t think bodies driven by foreign consciouses are a big problem, or ever likely to be. Can we save our outrage for real world rape culture?

That said, this isn’t the home run that Wonder Woman was, but it’s not a strikeout either. It’s definitely a solid base hit, if we’re going to continue the baseball metaphor. Is it worth going to theaters for? I’m sharply divided on this. I think that it should be seen on the big screen in a big theater, but at the same time I can’t really justify the risk for those who might be concerned about picking up COVID and passing it along to loved ones. I think it was the right call for Warner Brothers to make it available at home and that’s probably where you should see it. However, once you feel comfortable going back to the multiplex, hopefully some theaters will show it as a re-release so we all get a chance to see it as it was meant to be seen.

REASONS TO SEE: Gadot continues her ascent as a major star and Wiig delivers a bang-up performance. Gets better as it goes along.
REASONS TO AVOID: Extremely uneven. Pascal is surprisingly bland.
FAMILY VALUES: There is superhero action/violence as well as a scene of sensuality.
TRIVIAL PURSUIT: Although Wiig was Jenkins’ first choice to play Barbara Minerva, the role was initially offered to Emma Stone, who declined. Wiig was then offered the role.
BEYOND THE THEATERS: Fandango Now, HBO Max
CRITICAL MASS: As of 168/21: Rotten Tomatoes: 60% positive reviews. Metacritic: 60/100.
COMPARISON SHOPPING: Green Lantern
FINAL RATING: 6.5/10
NEXT: Soul 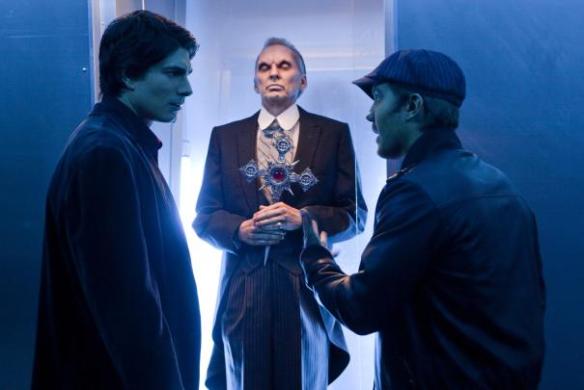 A private eye with the unlikely name of Dylan Dog (Routh) is one such investigator, one who is designated by the non-breathing community to be an independent and impartial arbitrator of disputes, keeping the peace between vampire, werewolf and zombie alike. However, he has retired from that position, opting instead for chasing infidelities in tawdry hotel rooms while his assistant Marcus (Huntington) yearns for better cases that might make him a partner in the agency.

One such comes along when Elizabeth (Briem) hires Dylan to find out what killed her father. When he discovers it might be a werewolf, he doesn’t want to take the case but when Marcus is killed by a zombie and it looks like the deaths might be related, Dylan decides to take the case after all.

Along the way he runs across an ambitious vampire club owner named Vargas (Diggs) who has plans of ruling the entire supernatural community after using Dylan as a pawn to take out his rivals in the vampire elite; Gabriel (Stormare), an old werewolf friend who doesn’t take kindly to Dylan’s investigations; his son Wolfgang (Angle) who has a bit of a temper and a nasty streak for breathers and vampires (breathers is the creature term for us humans) and a zombie supermarket for parts. Oh, and about Marcus – he doesn’t stay dead for long.

The whole thing turns out to be about a supernatural artifact that if used could bring about the end of the world, yadda yadda yadda. The sad fact is that we’ve kind of heard this tune before. It’s dressed up nicely however, with some decent creature effects and some underlit shots of New Orleans (even the scenes shot during the day seem dark somehow) that showcase the gothic side of that city to nice effect.

Routh is a nice enough lead, although he is far from the hard-bitten film noir detective the role needs. I might have cast someone along the lines of Bruce Willis or not being able to afford him, someone rumpled like Paul Giamatti or Jack Coleman, the Horn-Rimmed Glasses man from “Heroes.” A little more world-weariness might have amped up the noir quotient somewhat, and Routh is more of a Superman type than a Sam Spade type.

Huntington plays a very similar role to the one he plays in the excellent SyFy Network series “Being Human,” except there he’s a neurotic werewolf and here he’s a neurotic zombie. Stormare and Diggs are solid performers who don’t disappoint, with Diggs getting a slight edge for his silky smooth megalomaniac role. Angle, the professional wrestler, shows some promise in his part as the tempramental lycanthrope.

The movie is based on an Italian comic book that is immensely popular in Europe but has made little impact here. The original source material uses horror to examine social issues and contemporary morality whereas this is more of a straight horror spoof, something which infuriated Italian critics when the movie was released in Italy earlier this year. Not being as familiar with the comic, I didn’t have so much of an issue with that (although I admit it probably would have made for a better movie) but my problem is that the story tended to be a little scatter-brained, with characters saying and doing things that didn’t always make sense within their character. Why would someone, for example, dedicated to hunting down and killing monsters want to create a more powerful monster in their place? It’s all apart of the “smart people doing stupid things” syndrome that plagues Hollywood.

Quite frankly, this isn’t as terrible as you’ve probably heard it was (if you’ve heard anything at all) but it isn’t very good either. There are some moments that sparkle here (as when Dylan goads a werewolf by quipping “You fight like a vampire”) but there aren’t enough of them to fully recommend this. Still, any movie that brings the dark side of New Orleans to the screen scores big points in my book.

REASONS TO GO: Nice creature effects and Routh is a decent lead.

FAMILY VALUES: There are some creepy creatures, a goodly bit of horror violence, a few drug and sex references and a smidgeon of bad language.

HOME OR THEATER: Probably won’t be in theaters long enough for you to catch on the big screen but at home is just dandy.