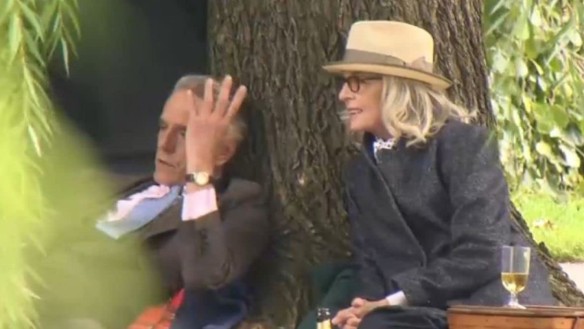 Jeremy Irons counts the number of blind jokes in the scene.

Romantic comedies seem to lend themselves to ensemble pieces, in which several different stories about a variety of couples finding love getting tied up with a nice, neat bow at the very end – which usually results in an ending. Far be it for the filmmakers behind Love, Weddings and Other Disasters to mess with the formula.

Jesse (Grace) is a pretty florist who has a type A personality, but became a reluctant viral video sensation when her fiancée dumped her in the middle of a skydive, causing her to dump him into a lake and sending her sailing into a wedding party on the adjoining dock. She became known around her native Boston as “The Wedding Trasher.”

Still, after stepping in to help plan a friend’s wedding, she is recommended to the fiancée of a Boston mayoral candidate (Staroselsky) to plan a big to-do for the candidate that will also score big political points. She takes on the job, much to the chagrin of Lawrence (Irons), the supercilious perfectionist of a caterer who is much in demand for the hoi polloi of Beantown. To make his day even worse, Laurence is set up on a blind date with Sara (Keaton), a photographer who is visually impaired and whose guide dog seems to have an unerring knack for launching her into things, such as the table with the meticulously set up champagne glass tower, sending it crashing to the floor. Even so, Laurence and Sara hit it off and after an actual date, he ends up spending the night at her place. While she’s asleep, he rearranges her furniture and then leaves her a love note. Laurence is a bit of a sadist, I think.

In the meantime, Jesse (remember her?) is trying hard to hire a rock band to play at the reception (the groom is a little bit classical, the bride is a little bit rock and roll – one is also tastes great, the other less filling) and she catches a band and is eager to hire them to do the wedding for which the guitarist (Boneta) is eager, but the front man not so much, leading to a rift in the band – and in the meantime, the guitar player falls in love with Jesse.

=And while all this is going on, a duck boat tour guide/captain (Bachelor) falls in love at first sight with a passenger with a glass slipper tattooed on her neck (Wirtz) and searches Boston for his Cinderella, becoming a cause celebre in the process, and the mayoral candidate’s goofy brother (Goldenberg) is appearing on the worst dating game show ever as contestants who are diametric opposites are chained together with the couple who lasts the longest winning a million dollars. Except instead of being a Harvard-trained lawyer that she claims to be, Svetlana (Hill) turns out to be a stripper with a mobster boss who wants to take a percentage of their winnings. And the hits keep right on coming.

For any screen romance to resonate with audiences, they have to invest in the couple and want them to get together. With all the different storylines going on, it’s nearly impossible to do that; all the characters and situations are woefully undeveloped and the plot, despite every attempt to make it edgy, is as predictable as the Kansas University basketball team having a winning season.

I don’t think this is the fault of the actors. Keaton is as wonderful as ever, and Irons is a pro as always, while Grace and Bachelor pour on the charm, but the writing is so tone-deaf, you end up looking up at the screen with jaw dropped and maybe even saying out loud “are you kidding me?” as the blind jokes are among the least offensive things going on in the humor department.

Still, those who love rom-coms will probably enjoy this because they are a particularly forgiving audience, and any chance to see actors like Keaton and Irons in action should be taken, even when the movies they are in aren’t so good. Just be warned, they are the bright spots in a movie that has few of them.