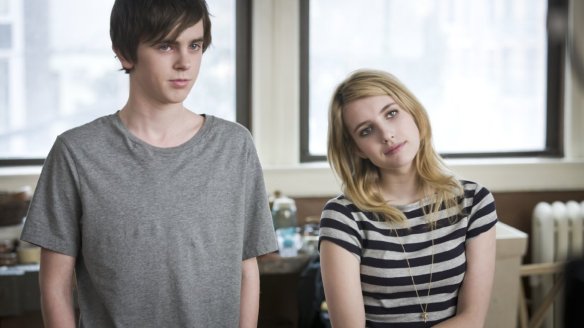 Discovering that craft services is Vegan only.

It seems sometimes that the world is overcrowded with movies about teens, floundering to find themselves, finding romance which inspires them to put aside whatever bullshit they were into and grow up. I’m not sure if the source of these are frustrated parents of teens, desperate for hope that their own kids are going to grow out of the phase they’re in, or by former teens who wish that their issues could have been resolved that easily.

George (Highmore) is a self-described misanthrope, although I might have added nihilist to the description. He is a budding artist who is inspired by nothing. We’re all going to die eventually, he reasons; why bother doing anything? So the homework at the elite prep school in Manhattan that he attends remains uncompleted and he spends his lunch breaks alone and reading Camus. And if you needed one more clue that George is a pretentious Morrissey-wannabe, he always always always wears a dark overcoat. Except in the picture above.

Then Harry – I mean George – meets Sally (Roberts) and impulsively takes the fall for her smoking on the school roof. Side note: has anybody actually named their daughter Sally since, say, 1947? Anyway, the two start hanging out together and George begins to develop those kind of feelings for her which are either not reciprocated or ignored. As it turns out, Sally’s got issues of her own although we don’t find out what they are until later in the film.

George also meets Austin (Angarano), an artist who starts hitting on Sally. George’s parents – his doormat mom (Wilson) and his stepdad (Robards) who turns out to be not nearly as successful as he let on – are having issues. George, now really upset, has a blowup with Sally and the two fall go their separate ways, Sally into a relationship with Austin and George into a quest to find meaning by finishing his homework which leads me to believe that the first group might be the source of this particular film.

First-time director Wiesen cast this Sundance entry well, with Highmore especially proving to be fortuitous. The young Brit has been a skilled actor for quite awhile (and has received rave notices for his work on the Psycho TV series. The George character is truly unlikable when we first meet him; pretentious and angst-ridden in the worst teen way. Like many teens who prefer to embrace the doom and gloom, they refuse to see the things right in front of them that are good – a mom that loves him, a school that wants to inspire him, a girl that could be good for him.  Instead, he prefers to mess things up for himself which is pretty true-to-life.

What isn’t is that the movie follows too many teen movie cliches in that everything is resolved by a girl leaving a guy, forcing him to make changes for the better and by the end of the movie he’s actually a likable guy with a bright future and of course the ending is as predictable as a Republican reaction to an Obama policy. Most kids are far too complex and far too smart to believe this as anything but the most optimistic fantasy. Change comes from within, and change for the better is hard work. I can’t think of many schools, particularly elite academic institutions, that would be willing to let someone who has slacked off on turning in his homework all year save his academic life. In fact, most schools would have expelled his ass long before.

Despite the cliches, this is actually a pretty decent example of the teen coming-of-age romance genre and while it’s no Say Anything it’s still competently made and has some decent performances, especially from Highmore. And, for once, the adults aren’t treated like morons; they have their own issues sure but they are well-meaning. Of course, the trend lately is to eliminate the adults from the conversation entirely, but Wiesen doesn’t do that. The Art of Getting By more than gets by, thankfully; it’s not a movie that will change anybody’s life or perception of it but it fits the bill, particularly if you’re into the niche that it fits in.

WHY RENT THIS: Highmore is engaging and turns an unlikable character into a likable one.
WHY RENT SOMETHING ELSE: Doesn’t really add anything to the teen coming-of-age romance movie genre which is overcrowded as it is.
FAMILY VALUES: Some of the thematic elements are aimed at more mature teens and adults. There’s also plenty of foul language, sexual content and scenes of teen partying and drinking.
TRIVIAL PURSUIT: In the first scene, the camera passes by Tom’s Restaurant, the one made famous by Seinfeld.
NOTABLE DVD EXTRAS: There are a couple of very brief interview segments on New York City and young love in general.
BOX OFFICE PERFORMANCE: $1.4M on an unknown production budget.
SITES TO SEE: Netflix (DVD/Blu-Ray rental only), Amazon, iTunes, Flixster
COMPARISON SHOPPING: Restless
FINAL RATING: 6.5/10
NEXT: Outside the Law