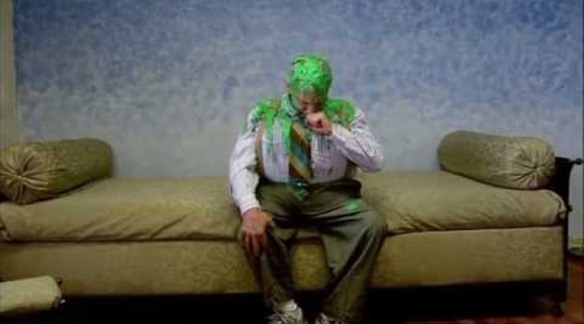 Making it in Hollywood can be a slimy business.

We make our beds in life through the choices we make. We choose a career that takes us away from our family and tell ourselves that we’re doing it for the family, only to discover that we’ve been away  so much we no longer have a family. Or we chase a dream so hard that it becomes an obsession, causing us to burn through family and friends along the way.

Jake Dietz (Monteith)  is a stand-up comedian who is on the downslide of his career; once a young Turk in the standup circuit and being considered for network sitcoms, he is reduced to taking rubber chicken corporate gigs in places like Moline, Illinois. He is struggling to make ends meet even though he drives a Mercedes, a remnant of better times.

Jake is divorced from Trish (Alexander) and together they have a son Patrick (Krickhan) who is autistic with the potential to be high-functioning except that his social skills are lacking. Patrick has a thing for fellow student Briana (Feehan) but doesn’t know how to approach her, which frustrates him. Jake wants to help but he’s also not exactly sure.

The school’s president, Dr. Hertzog (Brothers) is offering up a special program which seems perfectly suited for Jake, but the price is very high – fifteen grand to be exact. Wanting to give the best to his son, Jake starts looking in less desirable places for gigs, starting with his friend and a former standup himself, Stuart (Dubac) who has become an agent. In fact, Stuart got mutual friend Buzz (Dugan) a network sitcom that at one time Jake had been considered for until he turned it down because he thought it would be demeaning. Instead, it turned out to be a hit for Buzz and angry, Jake left Stuart’s agency and brought his best friend Art (Russell) with him.

But there is some hope. Stuart got Jake a small role on a TV show and another ex-comic friend, Danny (Conn) may have a slot on a corporate gig that would pay Jake the money he needs for the program. But despite another rage-fueled encounter with Stuart which may have derailed some of Jake’s hopes, something more promising lands in his lap after a really good gig that Jake does after a cancellation forces a local club owner to turn to Jake for help. However, taking that hope which might lead to Jake’s dreams finally being fulfilled would mean giving up the sure thing that would pay for his son’s treatment. What will Jake choose?

In the interest of full disclosure, I’ve been a big fan of Monteith’s since he was a young Turk on the standup circuit. In the intervening years he’s had a good deal of success, mostly in Britain (and yes, I’ve seen some of his BBC work in various outlets on the Internet and cable) but never quite made it to household name which I always thought was criminal; this is a very funny man and even though some might consider his style “old school” (which he comments upon in the movie) some of his standup sets here show that he hasn’t lost his touch.

There are also some of his fellow stand-ups of the late 80s and 90s like Addota and Ajaye who make brief appearances here which just reminds me that even funny young stand-ups become funny old stand-ups. Aging catches up with us all, even those who make us laugh. It’s still nice to see some comics I haven’t seen in more than a decade doing what they do best. I wouldn’t mind seeing them on a comedy nostalgia tour. Hey if New Wave bands can do it, why not stand-up comics?

Nostalgia aside, this feels a lot like it’s close to Monteith’s heart. The film doesn’t really focus on Patrick’s autism other than as an expense for Jake that he can’t afford, although the bond between Jake and his son is shown to be difficult but nonetheless strong. From my experience of families with autistic children, the relationship looks authentic and the movie gets points for that.

I liked the portrayal of the comedian’s life here; you watch them commiserating together, see the professional jealousies and regrets plainly and see them as people who have more of their career behind them than in front of them; Monteith as Jake puts it best when he says “I remember when too hip for the room wasn’t ironic” when describing his status among new hip comedians.

Monteith makes a compelling lead. He has a soft spot for family and friends but at times sacrifices either or both in pursuit of his dream of sitcom stardom. It isn’t always pretty and there are times when Jake is really not very likable, but at the end of the day he has a good heart that sometimes gets subverted by his baser instincts. Even when Jake isn’t likable, you still end up rooting for him and that’s crucial for a film like this to work.

I do have to say that there are times when the humor seems a little bit forced and some of the situations seem a little bit contrived. It feels like a few shortcuts were taken in the writing and it does detract a little bit from the genuineness you get from the rest of the film and does lower the rating of the film a little bit because it is somewhat noticeable; for example, the sequence in which a distraught Patrick runs away and is later found beaten up is unnecessary to the plot other than to artificially insert tension; the point that it seems to make – the urgency of getting Patrick enrolled in that socialization program – had already been made well enough.

Also the directors other than the opening sequence in which they employ handhelds to put yourself in Jake’s shoes tend to have fairly static camera placement. I actually find that somewhat refreshing, although most movie buffs I know are likely to be fussy about such things. Then again, this isn’t necessarily a movie for movie buffs per se.

The ending is a little bit predictable in that most experienced moviegoers will see it coming, but like the rest of the movie it packs a ton of heart. While this isn’t the most technically perfect movie you’ll see ever, this is a movie that clearly means a lot to the people in it and behind the cameras for it. Sometimes that’s enough for a movie to get by on, and in this case it’s very true. I actually think I enjoy the movie more now that I’ve had a chance to think about it than I did when I was first watching it and that is actually a pretty good feeling.

REASONS TO GO: Interesting look at the life of a comedian. Feels like a passion project. Monteith is an engaging lead.
REASONS TO STAY: Some of the plot points seem a little contrived. Ending is a little bit predictable. Staging may be too “old school” for hipper cinephiles.
FAMILY VALUES: A fair amount of foul language, some drug use and a brief scene of violence.
TRIVIAL PURSUIT: Monteith’s son Kyle and daughter Tierney cameo as passengers on the plane from Moline to Los Angeles.
BEYOND THE THEATERS: Amazon, Vimeo
CRITICAL MASS: As of 11/11/15: Rotten Tomatoes: No score yet. Metacritic: No score yet
COMPARISON SHOPPING: Funny People
FINAL RATING: 5.5/10
NEXT: Room