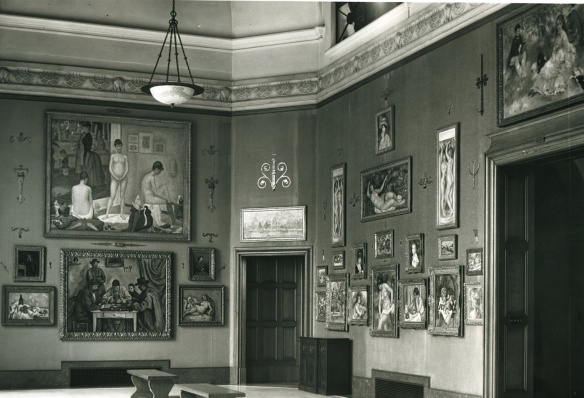 Dr. Albert C. Barnes, a Philadelphia inventor, created a mild antiseptic called Argyrol (based on silver nitrate) in 1899. Used in the treatment of venereal diseases, the drug made him a millionaire by the time he was 35.

With a keen eye for art, he began to amass a collection of Impressionist, Post-Impressionist and Modernist art that up to that time the art establishment had turned its collective nose up at, particularly in Philadelphia where art was more or less background wallpaper for social climbing. When Barnes displayed his collection, the press was so vitriolic in its reviews of his beloved collection he never forgave them, particularly Walter Annenberg, publisher of the Philadelphia Inquirer.

In a huff, he established his collection in his home in Lower Merion Township (outside of Philadelphia) and arranged the paintings in ways so that they worked harmoniously with one another, adding an extra dimension to their genius. There the collection sat becoming more and more acclaimed as time went by and the painters he had collected – Matisse, Picasso, Renoir, Cezanne – became revered as masters. The Philadelphia Museum of Art – the one at the head of the stairs that Rocky Balboa runs up in Rocky – wanted the collection, but Barnes, having seen the art collections of friends wind up in the hands of a museum he considered a cultural house of prostitution, wrote up an ironclad will with the help of the best lawyers of his time.

He stipulated that the collection remain intact; no piece could be sold, moved or loaned. He created a foundation to oversee the collection, limiting public access to it and making it reserving it for the study by art students and those who wouldn’t ordinarily have access to a major collection of that kind. After he died in a 1951 car crash, his will kept predatory hands away from his collection.

After his death there began an epic struggle for control for the collection. On one side is the Barnes Foundation, administered by Lincoln College (an African-American college in the Philadelphia area) and the bluebloods and city fathers of Philadelphia aligned on the other. At stake is a nearly priceless collection that Philadelphia’s politicos saw as a potential tourist attraction that would generate interest worldwide.

The fact is that they did succeed at circumventing Barnes’ will and getting the collection moved from the crumbling Lower Merion facility to a new one in downtown Philadelphia, slated to open later this year. In many ways this is disturbing in that the will of someone who purchased artwork can be contravened by those who seek personal gain from its use, use they didn’t earn.

The movie has one point of view and one point of view only – that of the Friends of the Barnes Foundation, who opposed the move and fought it tooth and nail. There are no opposing arguments – although to be fair, none of the opposition agreed to be interviewed for the film – which begs the questions about expanding access of a world-class collection for the world to see, as well as maintaining the facilities that would keep the artwork in the best shape possible for years to come. There is evidence that the Lower Merion facility was in danger of falling into sufficient disrepair that the artworks it housed could be damaged and potentially lost forever. There is also the argument that the art in the Barnes collection deserves to be seen by a wider audience.

The fact is that the artwork was bought and paid for by an individual who made it very clear what his wishes for the disposition of that artwork were. Whether or not that his wishes were in the best wishes of the artwork or of the general public may well be beside the point; whether a city has the right to take eminent domain over a cultural treasure in obviation of the wishes of those with legal control of that treasure. It is a point not explored by the film but then again, perhaps it wasn’t even a question for the filmmaker.

WHY RENT THIS: A very concise, well presented documentary about an outrageous contravening of the will of a Philadelphia art collector.

WHY RENT SOMETHING ELSE: There is literally no other viewpoint but the one of the Friends of the Barnes Collection; in some ways it’s more like propaganda.

FAMILY VALUES: There are a few bad words but not many.

BOX OFFICE PERFORMANCE: $544,890 on an unreported production budget; the film in all likelihood made money.

TOMORROW: Day 1 of Cinema365: From the Heart 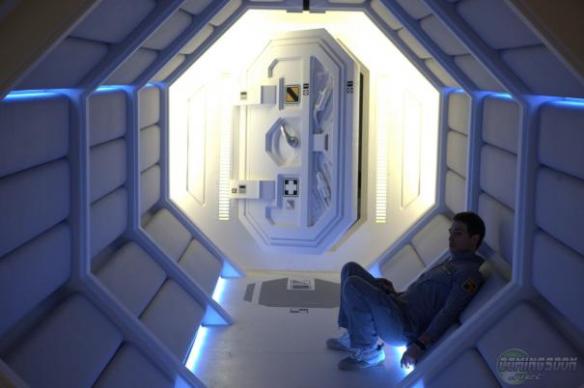 As resources become more and more scarce here on Earth, it is inevitable that we will begin to look outward to fill our needs. Certainly mining on asteroids and on the moon seem to be logical solutions for those needs. It also seems logical that in such inhospitable environments, much of the work will be done by robotic machines. Where will humans fit in that equation and what will happen to them so far away from help?

Sam Bell (Rockwell) is getting near the end of his three-year contract. He is the lone caretaker and worker at an industrial mining base on the far side of the moon. His job is to maintain the remote mining vehicle that scoop up the rocks and refine them, and make sure that they are loaded onto unmanned vehicles that transport them to Earth.

He has no direct communication with home – because he is on the far side of the moon, the signal must be bounced off of Jupiter and sent back home, a process that takes several days. He exists on taped messages from his wife (McElligott) and interactions with the station computer GERTIE (Spacey) who shows emoticons to supply an emotional context to the calm, soothing monotonic voice that issues from the voice synthesizer.

When Sam has an accident on the lunar surface, he wakes up in the medical bay with no memory of the accident or how he got back to the base. It takes him some time to recover, but when he discovers that one of the mining vehicles isn’t working, he takes a trip out there to fix it and discovers something shocking.

Beyond that you don’t need to hear more. Suffice to say there are some plot points that are unexpected and give the movie a whole new twist. That makes it a very refreshing and unique science fiction film, one that doesn’t rely on monsters or mutants or spectacular spacecraft battles.

The look of the movie is very much influenced by 2001: A Space Odyssey and Outland. The environment of the base is sterile and antiseptic but very much lived in, from the pin-up pictures on the walls to the dings and scratches on the surfaces of the walls and furniture.

This isn’t what you would call action-packed either. Instead, Moon relies on Rockwell to carry the picture and as he has proven in a number of recent movies, he’s perfectly capable of it. Much of the movie is Rockwell conveying the loneliness and frustration of being so near to returning home to his family; there are moments that are quite moving in that sense, but Rockwell doesn’t need to go over the top to get there, so he reins it in.

That’s a wise choice as an actor; this movie is not loud or obnoxious. It’s a quiet movie meant to inspire reflection and thought rather than visceral chest-pounding testosterone-inducing thrills. The movie has some points to make about the dehumanizing elements of industry and the inherent loneliness of working a dangerous job far from home.

The movie got a lot of buzz coming out of Sundance in 2009, and for my money, earned every bit of it. This isn’t the kind of movie that is going to set off fireworks and oohs and ahhs from the audience from its eye candy. Instead, it’s going to stick in your mind for weeks afterwards as you try to wrestle with your own ideas that the movie’s plotline leads you to. I’m not sure if it will qualify as a classic (something tells me that in years to come, it will be considered just that) but it certainly is the kind of movie they haven’t made since the era of Kubrick – hard science fiction. Guys like Larry Niven and the late John W. Campbell should take heart that the genre they made great is still alive and well.

WHY RENT THIS: The movie is certainly different than most sci-fi features we’re used to. It’s refreshing in that you never know exactly what’s going to happen next.

WHY RENT SOMETHING ELSE: Much of the movie involves Sam interacting with the computer or watching old messages; in other words, not a lot of action or interaction here.

FAMILY VALUES: The language is pretty blue and there are some moments that might be too intense for youngsters, but this will be fine for teens that are into sci-fi.

TRIVIAL PURSUIT: Director Duncan Jones is David Bowie’s son. While this is his first feature film, he’s directed a number of commercials in the United Kingdom.

NOTABLE DVD EXTRAS: Another science fiction short by Jones, Whistle about a contract assassin who uses satellite surveillance, is included on Blu-Ray editions along with a making-of featurette that includes director Jones answering questions at the movie’s Sundance Film Festival premiere and at a later screening at the Johnson Space Center in Houston. Do watch the movie before seeing the featurette, however – some major spoilers are revealed during the featurette.