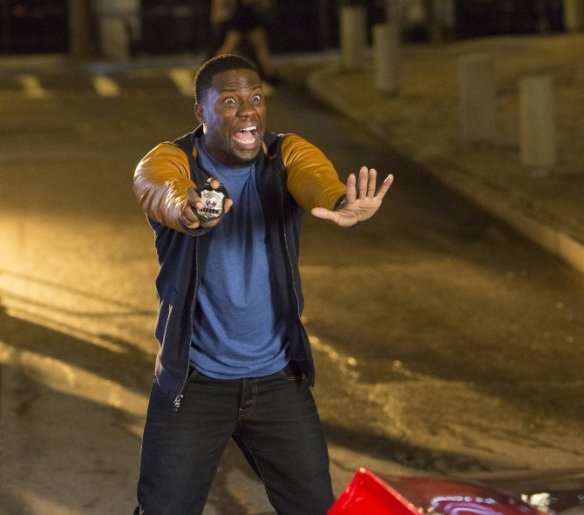 Kevin Hart begs the critics to stop writing mean things about his movies.

There are times as a critic that you simply have to understand that there are movies that aren’t meant for you. Their success is completely independent of what you think and quite frankly, you’re a pretty superfluous cog in the process. You also have to understand that just because you don’t find something funny doesn’t mean that others don’t as well.

Kevin Hart is a comedic actor who laughs all the way to the bank. His movies are essentially critic-proof; while he’s never gotten reviews above the lukewarm level, his movies time after time are hits. Does that say something about America’s sense of humor? Probably. It just as likely says something about critics’ understanding of filmgoers.

In this buddy cop sequel, Hart plays Ben Bishop, now a rookie cop having graduated from the academy he hadn’t entered yet two years ago for the first Ride Along. During a stake out, despite having been told by his soon-to-be brother-in-law James Payton (Cube) who is an accomplished and let’s just say badass detective, to stay in the van, he almost ruins a drug bust by coming in and interfering at exactly the wrong moment, ending up getting Payton’s partner (Gibson) shot.

However the incident unearths facts that lead James to Miami where a prominent businessman (Bratt) turns out to be a vicious drug lord looking to set up a superhighway of illegal material through the Southeast. Even though he’s marrying James’ sister (Sumpter) in a week, Ben begs James to let him tag along – which finally and inexplicably James allows him to.

Along with a cute Miami detective (Munn) and a greedy womanizing hacker (Jeong), the two misfit cops make their way through Miami like bulls in a china shop. Ben causes havoc wherever he goes until accidentally stumbling onto clues that lead the more serious James closer to getting his man, if the man doesn’t get them first.

One thing that can be said about Ride Along 2 is that it has already made history; it will forever be remembered as the movie that stopped Star Wars: The Force Awakens box office run as weekend champion. Pretty much though, that’s all the history it’s going to make. Kevin Hart has tons and tons of screen presence. He can also be a really funny guy when given the right material to work with. Most of the jokes here are fairly tired although there were a few good laughs in and among the bunch.

He has some pretty decent support. Ice Cube has become a solid actor and while he hasn’t displayed a ton of range yet, he does what he does really well. Munn has a huge amount of talent; she’s been impressive in virtually everything I’ve seen her in. However, she’s awaiting – and still awaits – that right role that will put her over the top.

So why doesn’t this movie work as well as it might? Well, the writing is the big culprit. The plot doesn’t seem to have been given a whole lot of thought and that would be okay if there were the jokes to cover for it but that is simply not the case. I will grant you that my sense of humor may be a lot different than most people’s but at the crowded screening I attended, I didn’t hear a ton of laughter. The action sequences are pretty rote, and there’s a touch too much mugging and not enough acting. The appeal of Hart is undeniable but sometimes a little Hart goes a long way.

At the end of the day, this falls under the “pleasant but not memorable” category. It’s entertaining enough that you can pass the time with it nicely, but it isn’t a showstopper that you’ll come back to again and again. The critics have been unduly harsh for the most part; it’s way too inoffensive to be worth the vitriol. Think of this as a sitcom that has a decent run for a couple of seasons but after that is canceled and is essentially forgotten; people don’t even binge watch it afterwards except if they’d never seen it before. It’s not essential viewing, but it’s viewing.

REASONS TO GO: Kevin Hart leads a solid cast. Occasionally funny.
REASONS TO STAY: Not funny often enough. Ludicrous plot.
FAMILY VALUES: A fair amount of police action violence, a bit of rough language, some sexuality and drug references.
TRIVIAL PURSUIT: The second film starring Ice Cube to be set in Miami; the first was All about the Benjamins.
CRITICAL MASS: As of 1/19/16: Rotten Tomatoes: 13% positive reviews. Metacritic: 32/100.
COMPARISON SHOPPING: The Other Guys
FINAL RATING: 6/10
NEXT: The Revenant