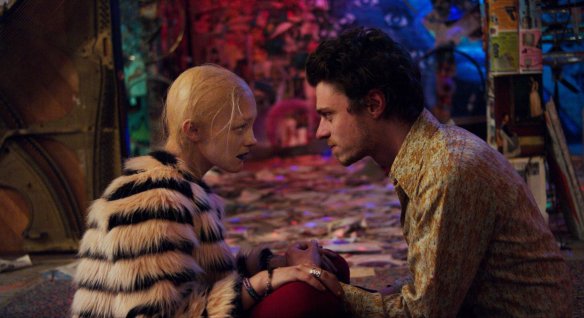 Someone needs a little hair tonic.

Some movies are easily described while others beggar description. This is one of the latter even though I’m about to give it a try.

Eli (Nicholson) seems to have a stable if unsatisfying life; he has a girlfriend, a steady job and an apartment in New York City – it’s a decent enough life. In a matter of hours though he loses all three and on top of that his parents decide to vacate New York for the heat of Arizona. “Visit us!” his mom exclaims once Eli has loaded all their furniture in the moving truck. That doesn’t seem likely given his situation – he’s essentially homeless and is sleeping in the delivery van that is his only source of income.

He gets a job delivering an engine to a small upstate town that will at least keep him afloat for a few months where he meets Kyle (Godere) who is having the engine put in his car but unfortunately Eli arrives with it too late for Kyle to drive out of the repair shop that day so Eli gives Kyle a ride home. In turn, Kyle takes Eli to an underground party in an abandoned warehouse space where he meets Kyle’s girlfriend Anya (Lopez) who seems to be the hippest person in all of New York State and that includes the five boroughs. Eli is quite smitten with her but Kyle gets mad at the attention Eli is giving Anya and he hits her. Anya seems to find that amusing but I guarantee most audience members won’t.

In order to stay nearby, Eli takes a job where Kyle works much to the dismay of both Kyle and Anya. When Kyle has to leave on some sort of trip, Eli keeps Anya company while he’s away. At first she is firm about keeping things on a friendship level; the two have a lot in common and seem comfortable with each other but both of them are hiding something; Eli is suffering from trichotillomania (a compulsion for pulling out one’s own hair) while Anya has trichophagia (a compulsion to eat human hair). We discover that Anya has been wearing a wig the whole time and is nearly bald from the yanking out of her own hair and consuming it. The two eventually have sex and while Eli sleeps Anya consumes his luxuriant head of hair, leaving him looking like a radiation victim as she does.

One of the consequences of trichophagia is that it can create massive hair balls in the intestines, effectively blocking the normal digestive process and this is what happens to Anya. Being that she lives in the middle of nowhere in a loft in which she has created a machine that creates light shows and kinetic movement by the sounds of a record played on an old-fashioned turntable, no help can arrive for hours so a distraught Eli realizes he has but one option – to perform surgery on her himself.

Yes, that’s essentially the plot and yes, it doesn’t make a ton of sense. I will give Robin props for at least coming up with an original concept here even if the execution isn’t always what I might like it to be. There is a little bit too much shaky handheld camera shots for my taste, but others may be okay with that. This is definitely going to appeal to Millennials as Eli and particularly Anya pretty much are almost stereotypical characters from that generation. In some ways, the whole film is an allegory for what it is to be from that generation; the characters have nowhere to go, nothing to do and are bored out of their minds. At least, to a mind of the generation that essentially fucked things up for Millennials.

Nicholson and Lopez are appealing actors who don’t appear to mind taking chances. Certainly it couldn’t be easy either having their hair shaved to look like victims of an atomic bomb or more likely to wear wigs that make them appear that way. During scenes in the middle of the movie, Lopez wears blue lipstick that gives her a corpse-like appearance and presages the scenes in the latter stages of the movie where she is getting her home surgery done.

That scene is fairly bloody and visceral and it may upset those who are affected by such things. There is a kind of absurdist humor that’s going on during it though that does lighten the mood considerably and in fact the whole situation is kind of abstract in a way – I don’t think you run into people who would willingly perform surgery (particularly on someone they are fond of) without any training whatsoever. Either Eli is an idiot, in a panic or self-confident beyond rationality. I’d probably choose the second explanation if given a choice.

The landscapes are pretty bleak here and most of the movie feels grimy and post-apocalyptic even though it’s clear that society continues to function in the movie (if you consider what society is doing right now “functioning”). Unfortunately the story feels disjointed and confusing and I had trouble at times figuring out why people were acting the way they did in the movie. There is a certain amount of nihilism present in modern society but if it really is as much as portrayed here, then we are truly screwed.

REASONS TO GO: It’s kind of a nifty allegory for how millennials are viewed. It’s edgy and at least tries to take a few chances.
REASONS TO STAY: There’s way too much shaky cam. The film is fairly disjointed and occasionally confusing.
FAMILY VALUES: Plenty of profanity, sexuality, some disturbing images as well as a fair amount of drug use.
TRIVIAL PURSUIT: The film originally started life as a 2013 short with the same title.
CRITICAL MASS: As of 3/8/17: Rotten Tomatoes: No score yet. Metacritic: No score yet.
COMPARISON SHOPPING: The Fly (1986)
FINAL RATING: 5.5/10
NEXT: A United Kingdom