Matt Dillon finally gets around to reading the script. "That's how it ends? SERIOUSLY?"

There’s no such thing as the perfect crime. Technology has made it increasingly more difficult for criminals to ply their trade. If professionals can’t come up with a perfect crime, what kind of hope does an amateur have?

Ty Hackett (Short) is a decorated war veteran who has fallen on hard times. After the death of his parents from long illnesses, he has become legal guardian of his teenaged brother (Kinney) who is more interested in tagging than attending classes. Ty has gotten a job as an armored car security guard through family friend Mike (Dillon). He’s the new kid on the block in a tight crew that includes Baines (Fishburne), Quinn (Reno), Dobbs (Ulrich) and Palmer (Nolasco). They stage a fake heist to haze the rookie.

Except that it wasn’t just a prank, it was a run-through. You see, the guards have decided that they want a piece of the pie and they’ve come up with a foolproof way to do it. They drive their two trucks to an abandoned factory that is a radio and cell phone dead zone, unload the $40 million that they are carrying during a particularly busy period and torch the trucks, claiming that they’d been jacked. No witnesses, and after some initial suspicion if they are disciplined and don’t spend their money unwisely, the money will be theirs once the heat dies down. Nobody gets hurt.

Mike presents the plan to Ty over chili dogs and at first the straight-arrow Ty wants no part in it, but with the house in foreclosure and now child services sending a caseworker (Raver) to investigate his brother’s infrequent class attendance could potentially split the brothers up lead Ty to finally agree to the plan.

Unfortunately, nobody thought to scout the factory and make sure nobody was there. A homeless man (Jameson) who was apparently living there observes what’s going on and the crew of professional security guards panic. Guns are fired, the homeless man is killed and Ty makes a decision to lock himself in one of the armored cars (which still has half the loot in it) rather than continue on with the robbery which he agreed to participate in. The guards huff, and they puff but they can’t blow the doors down. Things are further complicated when an inquisitive cop (Ventimiglia) hears the commotion in the abandoned factory and gets critically injured by the trigger-happy Baines put further pressure on the conscience-stricken Ty.

Director Antal has a couple of terrific films in his background (Kontroll, Vacancy) and the reboot of the Predator franchise in his future but something tells me this won’t be remembered as a highlight of his filmography. It’s not badly directed – the action sequences are in fact very well done – but the script is poor.

Frankly, I find the behavior of every one of the characters to be a bit out of whack with reality. I believe the intention here was to show the pressure cracking the bonds of the thieves from within but quite frankly, we get behavior that’s just inexplicable. Baines turns out to be a trigger-happy lunatic – who knew? – which would probably come as a shock to the security transport company that hired him. Apparently that little detail escaped the rigid interview and probationary process that armored transport security personnel undergo in order to be allowed to have access to the kind of money these guys have access to on a daily basis. And it seems to me that for trained professionals, they fell apart rather easily when the homeless guy shows up.

Worst of all is Ty, who has the most motivation of all to want the cash; he’s on the verge of losing his home and his brother. He is also a trained and decorated soldier, yet time and time again he puts other people in jeopardy after it is clearly demonstrated that his former crew is willing to kill. Not a very smart soldier, apparently. Also, none of the trucks have GPS devices in them, something that even pizza delivery cars have. A point is made that the trucks are to get them shortly, which is what makes the timing of the heist crucial.

Still, Short is likable enough as Ty which is a good thing, because when he makes his moral stand logic and real human emotion seems to go out the window. Any person who is risking his family would probably at least have some sort of second thoughts but there are none displayed at any time by the young ex-soldier. And while I won’t reveal the movie’s ending, it comes very abruptly and is not terribly satisfying. You are left staring puzzled at the screen mumbling “Really? That’s all?” in a dazed voice into your empty tub of popcorn.

Armored isn’t a bad movie but it isn’t a good movie either. The actors are solid, particularly veterans like Fishburne, Dillon and Reno. If the script had matched their efforts, this might have been entertaining. Unfortunately, this is barely passable in that regard.

REASONS TO GO: The action sequences are pretty intense. Short is extremely likable in the lead.

REASONS TO STAY: Ty’s not always entirely believable in his actions. As a matter of fact, the script has a lot of logic issues.

FAMILY VALUES: Plenty of bang bang, a little bit of oozing wounds and a crapload of f bombs.

TRIVIAL PURSUIT: The last time Dillon and Fishburne were in a film together was Rumblefish in 1983.

HOME OR THEATER: This has rental written all over it. 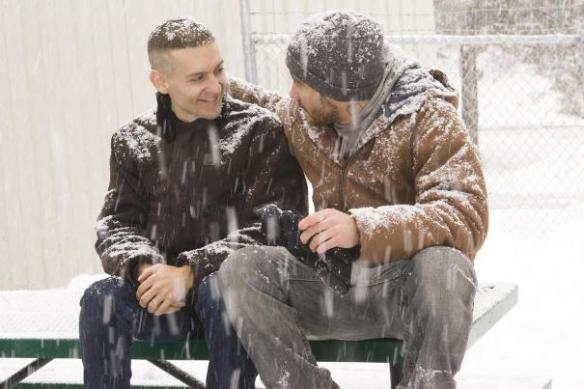 Two brothers as different as night and day; one a decorated Marine in Iraq on his fourth tour of duty, the other a drifter and ex-con who has gotten by mostly on wit and charm. When the Marine’s helicopter goes down and the Marine is presumed killed in action, his brother feels a responsibility to care for the wife and kids of the Marine. When it turns out he’s not quite dead yet and he returns to find his brother having assumed his role, can the shifting dynamics in their relationship mend the years of distrust and tension or will they destroy each other in a battle of wills?

Rating: R (for language and some disturbing violent content)

(Screen Gems) Matt Dillon, Laurence Fishburne, Jean Reno, Milo Ventimiglia. A group of dedicated officers at an armored transport security firm plan the ultimate heist…against their own firm. Everything goes like clockwork until an unforeseen circumstance causes everything to unravel. Now the cohesion between the crew comes apart and trust becomes a hard thing to come by. Who will come out of this heist alive?

(Miramax) Robert De Niro, Drew Barrymore, Sam Rockwell, Kate Beckinsale. This remake of an Italian comedy features De Niro as a widower whose grown children decline an invitation to gather for Christmas. Unwilling to accept being alone, he decides to visit each of his children at home and is surprised to discover that their lives are far from perfect.

(Full Circle) Patrick Cavanaugh, James DeBello, Jennifer Lyons, Tony Denman. A motley group of college students on an overseas study program find themselves at Razan University deep in the heart of Transylvania. Apparently these guys never saw any of the Dracula movies because it turns out this institution for higher learning is in reality a buffet for a nest of vampires.

Rating: R (for crude and sexual content, nudity, drug use, language and some sexuality)