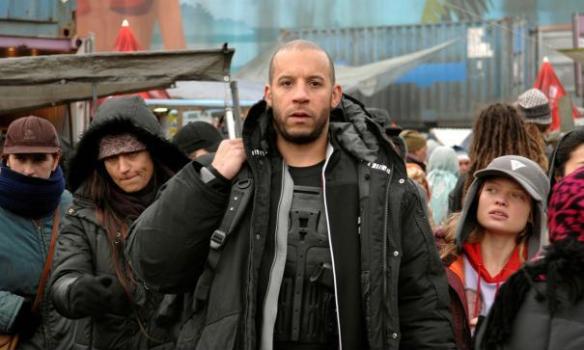 Despite the indicator on her cap, Vin Diesel still has trouble spotting Melanie Thierry.

In a world where survival is achieved only by the most ruthless and compassion is as extinct as dinosaurs, is it possible that someone could learn the meaning of sacrifice for the greater good?

Toorop (Diesel) is a mercenary/assassin living in a squalid flat in the remains of a former Soviet Bloc city that has fallen into disrepair and decay. Guns are sold on street corners like pretzels and dinner is whatever game you can kill or steal. Toorop has lived by his principles, his wits and his ability to come out ahead whenever violence is necessary.

His flat is invaded by a bunch of goons who interrupt Toorop’s dinner to take him outside to a high-tech armored limo wherein resides Gorsky (Depardieu), a powerful ruthless Russian crimelord who Toorop owes a debt to. Gorsky tells Toorop if he can smuggle a girl to America – New York to be specific – in six days, his debt will be wiped out and Toorop, who is wanted for terrorism in the good ol’ U.S. of A. can get a new passport, the key to a new life.

The girl turns out to be Aurora (Thierry), a curiously naïve young woman living in a convent run by the Noelites, a somewhat recent addition to the religious scene. She will be accompanied by Sister Rebeka, a rather serene nun who can kick booty when the occasion calls for it. The two of them will have to make it to a train that will take them to Siberia, where they can cross the Bering Sea in a commandeered submarine. It becomes reasonably obvious that someone doesn’t want Aurora to get to where she’s going, but Toorop and Aurora herself manage to avoid bombs, traps and cage fighters in order to get across the ocean with the aid of Toorop’s friend Finn (Strong).

Crossing the automated drone-patrolled frontier of Alaska and Canada into the States proves to be a difficult, although not insurmountable problem. Once the trio makes it to New York, they discover their problems are really starting.

Kassovitz, the director of such excellent films as Metisse and The Crimson Rivers, has publically disowned the movie, complaining loudly about studio interference from the beginning and quite frankly, it’s clear that this is the work of many hands. There are nonsensical action sequences that do nothing to advance the plot, and whole chunks of exposition missing that might make the actions of the lead characters a bit clearer.

Kassovitz has a wonderful dystopian vision here; the Eastern European sequences (mainly filmed in the Czech Republic) are dreary and muddy, speaking of a society in major decay where the infrastructure has all but fallen apart. By contrasts, New York is glittering and gaudy, the very model of a futuristic city. Toorop moves through both of them with the same panther-like grace, his very muscles radiating the tension of an animal that can rip your face off at any moment without any provocation.

However, all those beautiful images are submarined (no pun intended) by a plot that is at equal turns ludicrous and muddy, hard to follow and hard to believe when you can figure it out. The appearances of Rampling as a kind of homicidal Pope and Wilson as a scientist on life support who essentially has all the answers to all the questions about who Aurora is and why she’s so damned important. Worth dying for? Apparently yes….twice.

Although critics are fond of taking shots at Vin Diesel, he is far from the reason this movie doesn’t work. His Toorop is the closest thing he’s played to his signature character of Riddick yet; he’s a little less sociopathic than Riddick but still clearly a survivor that will trample over anything getting in the way of his survival. Not particularly new territory for Diesel but he knows it well and covers it adequately.

Yeoh is also a gamer, and she is given even less to work with than Diesel, but still manages to make her character memorable and believable. Yeoh has been one of my favorite actresses for the past decade and I’ll walk many miles over broken glass to see one of her movies…well, almost. Still, I will go out of my way to check out any movie that’s she’s in, even this one.

There are some good solid concepts in here somewhere and there might have been a decent movie made if the studio had left it alone, and if the writers had made the last third a little better. Kassovitz is a very talented director who deserved better material than this which, unfortunately he had a hand in. Still, something tells me he’ll think twice before working for a big Hollywood studio again and that’s a shame; he’s got some really great movies in him that might benefit from those kinds of budgets.

WHY RENT THIS: Some of the visuals are spectacular. Yeoh and Diesel give it the old college try but really don’t have enough to sink their teeth into.

WHY RENT SOMETHING ELSE: This is a real mess. It feels like too many hands were stirring this soup; it’s the poster child for studio interference and overly ambitious directors clashing with the final film being the ultimate loser.

FAMILY VALUES: There’s a good deal of violence and foul language, as well as some implied sexuality.

TRIVIAL PURSUIT: The round Sigil Tattoo on Toorop’s neck is meant to be a protective ward and is known as The Gate of the Necronomicon, symbolizing Man, The Creator and The Watchers.

NOTABLE DVD EXTRAS: There are full versions of the commercials playing in the background, as well as an animated “prequel” that explains some of Aurora’s backstory.