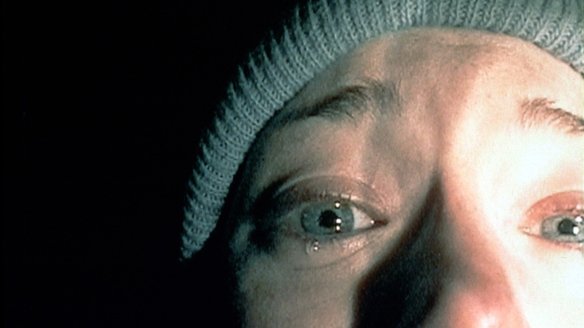 Fear and regret are not enough to assuage evil.

Some movies are victims of their own success. The Blair Witch Project was the forerunner of the “found footage” horror film craze that dominated the horror scene in the early part of the first decade of the century. The movie became so imitated that it has become a cliché in retrospect. Perhaps that is the ultimate honor for a movie; after all, imitation is the sincerest form of flattery.

By now, most folks know the basics about the movie; three student filmmakers venture into the Maryland woods to make a documentary about the legendary Blair Witch. They vanish from the face of the Earth until a year later, when the unsettling footage is found. The marketing campaign for the movie was so brilliant – really, it was the first successful viral marketing campaign in history – that many people, myself included, thought that both the legend and the story of the filmmakers were real. The mother of actress Heather Donahue received sympathy cards from friends and acquaintances who thought her daughter was really missing.

The production, shot for less than $90K (and would return nearly $250 million at the box office, making it one of the most profitable films ever made to this day), wisely refrains from showing us the actual Blair Witch, or anything supernatural. Everything happens off-camera. Much of the sense of dread and fear comes from sounds in the dark; of the sensation that the hapless kids are being stalked by something in the woods. Our imagination fills in the blanks.

Does it hold up to repeated viewings? That’s another question entirely. I’ve rewatched the film several times since first seeing it in a theater back in 1999 when it came out and to be honest, the experience doesn’t quite measure up to the one of a theater full of people seeing the movie for the first time. I would guess that it would be hard to re-create that environment nowadays, even with reduced capacities in the theaters due to the pandemic. I think much of the power of the film comes from the nagging feeling that what you are seeing actually happened and that the three kids that you’re watching fall apart in the woods are real kids who are no longer with us. That adds an emotional wallop that no amount of CGI can duplicate.

For all its flaws, The Blair Witch Project stands as a watershed horror film, the kind that comes along once in a generation. Likely we won’t see the like again for a long time, the kind of film that changes the game for horror films in general. In fact, the movie would shift horror films away from the torture porn that dominated horror box office at the time to lower budget atmospheric horror movies that made a connection to the real world that the viewer lives in. The true horror is not in monsters and demons and ghosts; the true horror comes from This could happen.

REASONS TO SEE: The rare occasion where a marketing campaign enhanced a movie. The three then-unknown actors were all perfectly believable. Genuinely terrifying.
REASONS TO AVOID:  Original premise, although it hasn’t held up largely because it was so oft-imitated.
FAMILY VALUES: There is profanity and scenes of terror.
TRIVIAL PURSUIT: The movie proved to be so popular that it nearly ruined the area’s 1999-2000 hunting season due to so many fans flocking to the woods to shoot their own documentaries.
BEYOND THE THEATERS: Amazon, AMC On Demand, AppleTV, Fandango Now, Google Play, Microsoft, Redbox, Sling TV, TBS, TNT, Vudu, YouTube
CRITICAL MASS: As of 10/31/20: Rotten Tomatoes: 86% positive reviews. Metacritic: 81/100.
COMPARISON SHOPPING: Paranormal Activity
FINAL RATING: 8.5/10
NEXT: Yellow Rose

Never wolf down your food.

If you were in the woods far away from civilization, where would the safest place to be? You would think among a troop of soldiers on training exercises. There are some things though an entire army wouldn’t even be able to protect you from.

Private Cooper (McKidd) looks to join the elite SAS unit and looks to have the skills to do it. However when he is ordered to kill a dog, he refuses. The commanding officer, Captain Ryan (Cunningham) shoots the dog himself and sends Cooper back to his unit.

A month later, Cooper’s squad, commanded by Sgt. Wells (Pertwee), is dropped into the Scottish highlands for training exercises. They’re supposed to attack a squad of SAS commandos but when they reach their encampment, the place has been torn to shreds. There are no bodies but plenty of bodies and bits of flesh and organ strew about. It looks like the scene of a massacre. There is just one survivor – Captain Ryan, who is grievously wounded and keeps muttering “there was only supposed to be one.”

Right about then the soldiers are attacked by unknown assailants. Corporal Bruce Campbell (Lockyer) is impaled on a tree branch and the rest of the squad make their way to an abandoned farmhouse with the help of a zoologist they encounter on the road, Maggie (Cleasby). They hole up there, thinking if they can hold out until morning the werewolves will revert to human form and they’d be safe.

Soon it appears that won’t be happening. One of the soldiers, Private Terry Milburn (Simpson) is abducted and their ammo is running low. It becomes obvious that they will need to find a way to escape before dawn or they just won’t survive.

Marshall has crafted an old-school kind of werewolf movie that eschews CGI for practical effects and with a script clever in its references to all sorts of movies, from Zulu to Star Trek II: The Wrath of Khan to Night of the Living Dead. That sounds like a bit of a mishmash (and it is in a way) but it actually works really well. The movie has a clever sense of humor that is going to appeal to not just the fanboy but the casual horror fan as well.

Marshall apparently has a pretty good sense of how military units operate – he’s gotten praise for getting that aspect right. He also has a good sense of how soldiers talk – not like cliché machines but with a wide swagger, a hefty dose of macho but also a sense of precision. Military units thrive on precise communications; they would be pretty unsuccessful if they weren’t efficient that way.

The movie was produced on the cheap; in that sense from time to time the lack of a budget shows through although for the most part the movie looks more expensive than it was. The cast is solid and talented (although Jason Statham was offered a part in the movie he had to decline to commitments to other films) and gets the military jargon down, not to mention the swagger. There are a few twists and turns (although you should be able to guess what the “mission” of the SAS really was, what the significance of the farmhouse is and what the secret of the werewolf clan is) and even better, plenty of visceral thrills to deliver the discerning horror film fan to hog heaven.

The movie failed to get theatrical distribution in the United States as distributors labeled it as “too British” which just goes to show you how stupid distributors can be (just check the box office receipts for Shaun of the Dead if you don’t believe me). It was initially shown on the SyFy Channel (and it still turns up on cable regularly) before getting a home video release, including a bare-bones Blu-Ray release a couple of years ago. That’s a shame; I think someday this will be recognized as a classic in the genre and given the respect and treatment it deserves. Until then, it can be our little hidden gem.

WHY RENT THIS: One of the best werewolf films of recent years. Practical-effect werewolves rock. Reminiscent of Evil Dead and An American Werewolf in London in tone.

WHY RENT SOMETHING ELSE: Cheap production values sometimes show through.

FAMILY VALUES: Lots of violence, lots of gore and lots of bad words.

TRIVIAL PURSUIT: Although the movie is set in Scotland it was actually filmed in Luxembourg.

BOX OFFICE PERFORMANCE: $5.5M on an unreported production budget; my guess is that the movie was slightly profitable.