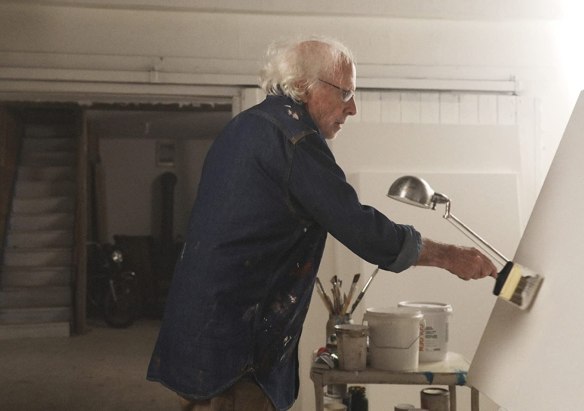 Bruce Dern at work on another masterpiece.

Our country is aging, and as we do, we become more concerned with the problems of age – dementia being one of them. Most of us have known someone affected by it, either directly, or suffering because of a loved one affected by it. Hollywood finds this a particularly fertile ground for dramas, particularly of the Oscar-bait sort.

Richard Smythson (Dern) is one of the country’s pre-eminent artists, a man whose paintings routinely fetch six figures and whose name on the faculty alone can grant legitimacy to a college or university, but as lions go, he is feeling the chill of an oncoming winter. He is forgetful, and inspiration has fled, even as he prepares to what might very well be his final gallery show.

His second wife Claire (Olin) tries to keep things together, dealing with all the irritating issues of life which frees Richard to concentrate on his painting; as he says during an interview, “I create the art – Claire takes care of everything else.” The thing is, he means it as a compliment although most modern women probably would raise an eyebrow at that.

Claire is fully aware that her husband’s memory and talent are slipping away. She decides that she should reunite him with his daughter Angela (Rylance) and his grandson Diego (Cabot-Conyers) whom neither of them has met. In fact, Claire was ignorant of Angela’s sexual preference not to mention that her partner had recently left her for someone else.

And Angela is not just estranged from her dad, she’s really estranged from her dad. She wants nothing to do with him, no matter how long he may have left. Her life isn’t perfect, but she doesn’t need further drama that her often-cantankerous father sometimes creates. She reluctantly gets to know the persistent Claire a little better, and eventually agrees to come to their modernist house in the middle of nowhere for Christmas. But Richard being who he is, it becomes the most awkward Christmas celebration ever.

But as Richard is slowly disappearing, Claire – who was an artist herself before giving it up to be with Richard – is beginning to rediscover herself and in that rediscovery, just might find a way through the encroaching night which is falling on Richard and their life together.

The entire movie takes place in winter and cinematographer Ryan Earl Parker nicely utilizes snowy, white landscapes to great effect, reminding us that Richard is in the winter of his life. Dern, who has made a cottage industry of playing irascible old men of late, is never better, playing Richard with equal parts egotism, rage and eye-twinkling charm. Dolby doesn’t shy away from allowing Dern and Olin express the couple’s sexuality on the screen, something which Hollywood has a tendency to shy away from (except as a punch line).

But despite having Oscar nominee Dern front and center, this is not about Richard – the movie is called The Artist’s Wife, after all, not The Artist – but about Claire and Olin, a Swedish actress who has been almost criminally underrated for the most part, generates a performance that has to be one of the best of her career.

There is a consistency problem here; some of the situations feel very unlike how you’d expect the characters to react, which is puzzling because Dolby – one of the co-writers of the film – doesn’t turn away from his character’s foibles and issues. They are all fully human, but when Angela relents and brings her son and their calming babysitter Danny (Jogia) to visit, it feels forced, as if the script required a confrontation and this was the most expedient way to create one. The ending of the movie isn’t exactly what I expected, and in some ways felt like a cop-out, but it does remind us that love sometimes is about doing the hardest thing, and occasionally, the most unlikely.

There are moments that are maudlin, but Dolby largely avoids those sorts of opportunities; his own father passed away due to complications from Alzheimer’s in 2013 and certainly that experience likely played a role in the script-writing here. Those who have loved ones going through the process of memory and personality change may find this a painful watch, but those looking for some strong acting performances and a drama that doesn’t necessarily take the easiest road to the finish might well look into this one.

REASONS TO SEE: Dern is reliably captivating and Olin gives one of the best performances of her career. A portrait of love that transcends standard boundaries.
REASONS TO AVOID: Goes off the rails from time to time.
FAMILY VALUES: This is a fair amount of profanity, some sexuality and brief graphic nudity.
TRIVIAL PURSUIT: Olin initially went to university to study medicine and briefly worked as a nurse before moving into acting.
BEYOND THE THEATERS: Amazon, AppleTV, Google Play, Vudu, YouTube
CRITICAL MASS: As of 9/29/20: Rotten Tomatoes: 63% positive reviews, Metacritic: 53/100
COMPARISON SHOPPING: The Wife
FINAL RATING: 7/10
NEXT: We Are Many