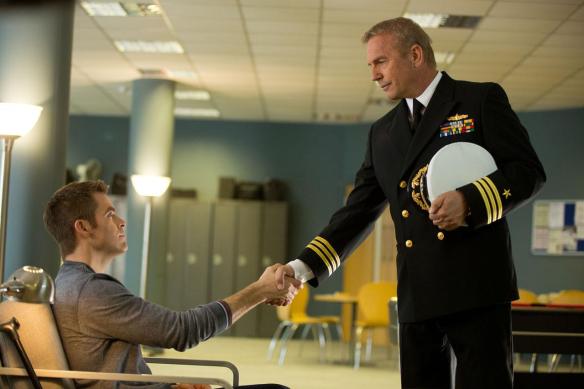 In many ways war has become obsolete. A world war seems pretty unthinkable when so many nations have nuclear capability. In the 21st century rather than waging war on a battlefield, it seems far more effective to wage economic war electronically.

Jack Ryan (Pine) is studying for his doctorate in economics when the World Trade Center comes down. He is moved to join the Marine Corps and is advancing in rank when his helicopter is shot down. He is badly injured and must learn how to walk again. He catches the eye of a pretty physical therapist named Cathy (Knightley) who is preparing to be an eye surgeon and doing a student rotation in PT at Walter Reed. He also catches the eye of Thomas Harper (Costner), head of a CIA team whose mission is to prevent terrorist attacks. Harper recruits Ryan to keep an eye on terrorist money laundering on Wall Street, helping him complete his doctorate and placing him at a high-profile Wall Street firm.

That proves dividends when Jack notices certain accounts at a Russian firm have been hidden from his company. That seems extremely suspicious to Jack so he goes to Moscow to run an audit where he meets billionaire Viktor Cherevin (Branagh) who sets off all of Jack’s up-to-something sensors. Things are further complicated when comely Cathy, now Jack’s girlfriend and completely unaware of his double life as a CIA analyst, impulsively travels to Moscow and becomes caught in the middle of what could be a crippling economic blow to the United States.

As the first Ryan film not to be directly sourced from an existing Tom Clancy novel, the movie rewrites the origins of the bestselling character and updates it somewhat (the first Ryan film appeared in 1990, eleven years before 9-11). Pine becomes the fourth actor to portray Ryan in five films which is perhaps one of the reasons this franchise, while profitable, has never really taken off like Bond for example, which seems to survive the changing of actors much better than Jack Ryan does. Also, the Bond films have surmounted the end of the Cold War much more effectively than the Jack Ryan movies which really need a Soviet presence to work properly.

This is perhaps the least visually impressive of the Ryan movies but yet still packs a decent visual punch. We don’t really get to see the high-tech CIA headquarters much (read: at all) and most of the really impressive visual stuff takes place at the headquarters of the Russian financial corporation that Ryan is auditing.

The cast is fairly impressive, with veteran Costner coming off with the win as the laconic CIA officer who, when asked by Jack if he and Cathy can have a moment to discuss their relationship situation after she discovers his double life, says flatly “No. This is geopolitics, not couples therapy.” It’s a highlight in a movie that lacks light moments.

Pine plays Ryan as a literal analyst; he always seems to be thinking ten steps ahead of things. Often this leaves him feeling cold and unapproachable to the audience. I would have liked to have seen more humanity from Ryan, who as portrayed by Harrison Ford, Alec Baldwin and Ben Affleck, always seemed to manage some humanity while still coming off as the smartest guy in the room. Pine gets the second part right.

Branagh, once the heir to Sir Laurence Olivier’s mantle in terms of being the finest actor and director of Shakespeare onscreen, has of late been trying his hand at action movies, having previously directed Thor before taking this one on. He has a fine visual sense as a director and uses that to his advantage here. As for action sequences, there aren’t really a lot of them here – a motorcycle chase near the end of the film, a fight with an assassin in a hotel room and a very suspenseful sequence in which Jack is trying to retrieve data from the computer of Cherevin before getting caught. That contributed I think to what I felt as an overall lack of energy in the movie; it didn’t seem to flow the way I would like an action movie to flow.

As the bad guy, Branagh is very understated (as opposed to the villain he played in The Wild, Wild West in which much scenery was chewed) and makes a nice foil for Ryan, full of quiet menace but with real rage boiling underneath the surface. If the movie were a tiny bit better, he’d have been a classic espionage villain but even as it is he is still a superior villain. I wonder what Harrison Ford’s Jack Ryan (still the best of the bunch) would have done with Branagh’s Cherevin.

REASONS TO STAY: The movie has a curious lack of energy.

TRIVIAL PURSUIT: Costner was originally cast as Jack Ryan in the very first movie in the franchise, The Hunt for Red October but wound up turning it down to make Dances With Wolves instead.

COMPARISON SHOPPING: The Sum of All Fears