There are those who say that we cannot escape childhood. Like death and taxes, it pursues us with relentless ferocity and those things in childhood that wounded us remain with us, periodically picking at the scabs.

Michael Taylor (Reynolds) is a best-selling author although what he writes is generally considered “light” reading. His relationship with his father Charles (Dafoe) is strained at best. Charles is himself a frustrated writer who retreated into the halls of academia when his career as a novelist didn’t pan out. A strict disciplinarian with his children but mostly with his son, Charles meets any indiscretion with the most horrific and overreacting punishments imaginable. You can imagine what this academic does when Michael as a boy (Boyd) shames him by plagiarizing a Robert Frost poem and presenting it as his own.

Michael is definitely abused but he has two women in his corner; his gentle mother Lisa (Roberts) and his feisty aunt Jane (Watson as an adult, Panettiere as a teen) who protect him against the worst of his father’s rages and comfort him when their protection is breached.

As an adult Michael has definitely made some errors. He has separated from his wife Kelly (Moss) and continues to have a contentious relationship with his father. When a family tragedy brings the family into the same place, Michael and Charles will have to confront their feelings for one another perhaps for the first time in their lives.

Although set in Illinois, the movie was filmed in Texas and has a kind of Southern gothic feel to it that is almost soap opera-esque. Dafoe is note-perfect as Charles whose anger issues and self-loathing point to deeper waters that the film doesn’t explore but that Dafoe seems to have a handle on. Roberts’ Lisa at first glance seems like the long-suffering wife archetype but it turns out that she has some secrets of her own and not all of them are pleasant. Roberts, normally a star who appears in much higher-profile movies, imbues Lisa with decency and humanity.

Reynolds in recent years has gotten all sorts of flack for appearing in some sub-par films but to my mind is actually capable of some pretty good work. This is an example of him at his finest, showing that Reynolds can really deliver when given the right script.

The jumps between present day and past can be jarring and with all the souls revolving around the story here it can be difficult to distinguish one character from another. Simple linear storytelling might have served the film better, or failing that cutting down on the superfluous characters would at least be helpful.

The pacing here is as slow as a tax refund when you really need it which suits me just fine but some viewers who prefer a more robust pace might find frustrating. Lee does have a good eye and some of the scenes have an artful grace to them, such as when the family is swatting fireflies with badminton racquets or the bookending scenes in which young Michael is forced to walk home in the rain after a transgression in the car and his nephew Christopher (Ellison) runs away from nearly the same spot 22 years later. Despite the star power for this indie feature, there isn’t enough here to really sustain interest over the course of a full film although there is enough promise in Lee’s work to keep me interested in his future endeavors.

WHY RENT THIS: Fine performances by Dafoe, Roberts and Reynolds. Some graceful touches.

WHY RENT SOMETHING ELSE: Multiple actors playing the same role gets confusing. Storytelling is a bit muddled. Languidly paced.

FAMILY VALUES: Plenty of foul language as well as some sex. 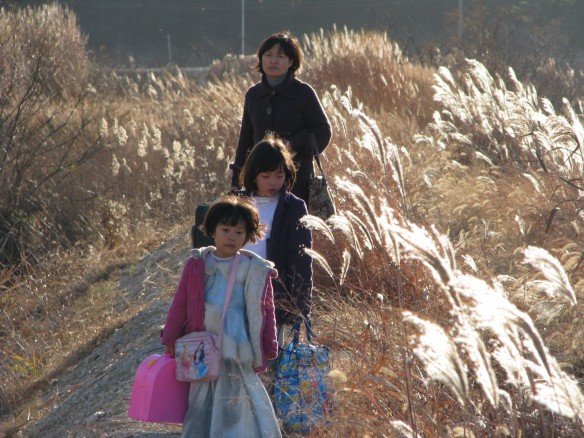 It may be bucolic but there's an underlying tragedy being enacted here.

The world can be a harsh place. It is particularly rough on children, especially when their parents are not around. Think of how much harder it is when the parents give them up voluntarily.

Seven-year-old Jin (Hee) and her little sister Bin (Song) are sweet, well-adjusted little girls in South Korea. Unfortunately, their mom (Soo), not so much. Ever since her husband left them, she has had a very hard time adjusting. Raising the two girls by herself proves to be too much so she decides to go and reconcile with her husband. She then must leave her daughters with Big Aunt (Mi), her older sister who makes it very clear that this is a temporary arrangement and that she’s not interested in taking care of the kids herself.

It also becomes equally clear soon enough that she’s an alcoholic, which complicates matters. While their mom promises to return by the time that an empty piggy bank is filled with coins that Big Aunt will give them when they do their chores and are good (giving them incentive to be good – the better they are, the sooner Mommy will be home in their minds), they find themselves often bored with few children their age to play with.

They often wait by the bus stop they saw their mom leave from but she never appears. The piggy bank eventully winds up getting full (thnks to some cleverness from Jin who changes some of the bigger coins into several smaller ones to fill up the bank faster). Eventually they get a letter from their mom saying that things haven’t worked out with their dad and that she will be gone much longer than she first thought.

That’s the breaking point for Big Aunt who decides that the children must now be left with their grandparents on their farm in rural Korea. While the farm is not particularly successful and old granddad not wanting to raise a whole new set of kids after having already raised his own, the grandmother (Boon) takes the girls under her wing and teaches them the importance of family while they patiently await a mother who may never return.

This is a movie whose ambitions I admired very much. So Yong Kim has crafted a very quiet movie with not a whole lot of dialogue and a pace that requires a great deal of patience. Those who have it will be rewarded with a story that has its own beauty as well as its own tragic elements. One leaves the movie wondering what on earth will become of these kids and what sort of chance they have in life.

Much of the film centers on the two sisters and fortunately, both are adorable enough to be interesting. I wouldn’t call it a performance so much as the kids being themselves and allowing Ms. So to film them. There are moments that are truly charming…but to be fair, there are also some that are rather boring as well.

I liked the concept of following the children around and trying to get into their heads as they try to make sense of a missing mom. Unfortunately, the movie takes so much time in getting to its very chrming and bittersweet ending that I found my attention wandering. Maybe that makes me a curmudgeon but this felt more like babysitting than film viewing. I guess I’m turning into the grandfather here which is a scary thought in and of itself.

There is plenty to recommend the movie but one must be a little bit on the Zen side to truly enjoy it. It is rewarding, yes but I’m not sure I’d have the patience to sit through it again. It’s very much like a still life painting. There’s a lot going on if you have the patience and perception to look; it’s just that not all of us do.

WHY RENT THIS: A very realistic look at a family fractured by alcohol and neglect. The two young girls are adorable.

WHY RENT SOMETHING ELSE: Long periods of time go on with little story advancement. The director relies overly much on the cuteness value of the leads.

FAMILY VALUES: No violence or sexuality and almost no profanity. The themes are a bit on the mature side though.

TRIVIAL PURSUIT: Most of the cast were amateur actors who had never been in a film before.

NOTABLE DVD EXTRAS: There is an interview with the two little girls two years after the completion of filming; there is also a Q&A with the filmmaker after a screening at the New York Film Forum.

BOX OFFICE PERFORMANCE: $124,023 on an unreported production budget; the film probably broke even or even made some money.