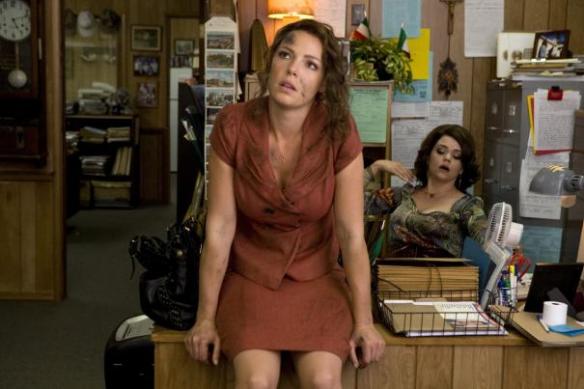 Katherine Heigl poses for another glamour shot while Ana Reeder has a moment.

Desperate times call for desperate measures. When Stephanie Plum (Heigl) loses her job as a lingerie salesperson at Macy’s and goes six long months without a paycheck, she is reaching that desperation level of which I referred.

So when her cousin Vinnie (Fischler) has an opening at his bail bonds business for a bounty hunter. The kicker is that the guy she has to arrest is Joe Morelli (O’Mara) who was the one to – how to put this delicately – deflower Stephanie and then dump her unceremoniously, making him a first class schnook and a reason for Stephanie to jump on board with both feet.

Of course she knows next to nothing about bounty hunting, so she enlists the help of veteran hunter Ranger (Sunjata) who shows her the ropes and seems to be a little sweet on her (although this never goes anywhere in the movie). Of course it’s all fun and games until someone gets hurt.

The trouble is that Joe – a cop – doesn’t particularly want to go to prison and there’s a really good chance he’s innocent. He’s involved with a rather vicious boxer who may have murdered his girlfriend and may be involved with organized crime. The people who are after Joe are serious and lethal, and Stephanie finds herself smack dab in the middle. With the aid of her informants Lula (Shepherd) and Jackie (Bathe) – both prostitutes – a friendly boxing promoter (Leguizamo), her boss’s brassy secretary (Reeder) and her doting grandmother (Reynolds), she has a fighting chance to get out of this in one piece. That is, if Joe doesn’t kill her first.

This is based on the first installment of a series of books by Janet Evanovich that is extremely popular with the mystery-loving set. Heigl is apparently a big fan of the series and is producing the movie as well as starring in it. One suspects that she had a hand in casting herself in the role, which was a bit of a mistake. Heigl excels at breezy romantic comedy roles; her other action pics have been less successful.

In the books, Plum has loads of attitude and plenty of chutzpah, much more than Heigl conveys here. Heigl delivers the wisecracks but without the strength of character that Plum possesses. Heigl portrays her with a bit more vulnerability than I recall from the books. Now I’m not one of those sticklers for movie characters being absolutely identical to their literary counterparts – that’s not always possible or reasonable – but there are core traits that make the character unique and those shouldn’t be messed with.

Evanovich excels at creating unique characters and Ranger and Lula are two of her best. Shepherd makes something of a poor man’s Octavia Spencer but she does the role justice. I’m not real familiar with Sunjata but he is one of the better performers here; I looked forward to all of his scenes in the movie and he seemed to be the most at ease in his role. He didn’t make Ranger a superman, but he did give him that air of confidence that is needed to pull the part off.

Reynolds is one of the reasons to see the movie all by herself. She rarely makes screen appearances and while this doesn’t exactly rate with some of her finest work, it’s always wonderful to see a genuine Hollywood star (in the traditional sense of the word) at work.

The movie has been getting savage reviews and in some ways I can see the point – Robinson, primarily a television director, seems ill-at-ease on the big screen, creating a movie that seems more suitable for an hour-long network show than a big screen franchise. There’s a curious lack of energy here (although not for lack of trying) and while it conveys some of the charm of New Jersey, it adds none of the flavor, like a plate of spaghetti with no sauce.

Still, I found it pleasantly entertaining and while it’s not a movie that’s likely to stick in your memory for very long, it is diverting enough while you’re watching it. If I’m going to pay ten bucks a head for a movie, I at least want to be entertained and this movie delivers in that department. What more do you want?

FAMILY VALUES: There is a certain amount of violence, plenty of language, some sexuality (and partial nudity), a bit of drug use and plenty of Jersey attitude.

TRIVIAL PURSUIT: There are 18 volumes currently in Janet Evanovich’s Stephanie Plum series, all of which have a number in the title in some form.

GREY’S ANATOMY LOVERS: Heigl, O’Mara, Sunjata and Monk have all appeared on “Grey’s Anatomy,” with Heigl and Sunjata being past or present regular cast members. Robinson has directed several episodes of the show as well.