There’s something a little bit off about Nana.

Becca (DeJonge) and her younger brother Tyler (Oxenbould) are about to head to rural Pennsylvania to visit their Nana (Dunagan) and Pop-Pop (McRobbie). The older couple is estranged from their mother (Hahn) who was dating someone they didn’t approve of; they had a big fight and mom did something so awful that she can’t bring herself to tell her daughter what it was. Becca hopes that she can make a documentary  (because, every kid in a horror film wants to be an auteur) about the visit so she can capture her mom’s parents forgiving their child on tape and healing the rift between them.

At first, it seems an ideal visit; it’s winter and snow covers the farm that they live on, but Nana is making all sorts of cookies and baked goods it seems hourly and Pop-Pop is full of bonhomie and charm. The kids are a little taken aback by a few rules – not to leave their room after 9:30pm or to ever go into the basement because of a mold problem but these seem harmless enough.

Then the two older people start acting…a little off. Pop-Pop seems disturbingly paranoid and Nana seems to absolutely go bonkers after dark. Becca and Tyler capture it all on tape. Mom, who has gone on a cruise with her boyfriend (Cordoba) is skeptical. It soon becomes apparent to the kids that there is something very wrong going on in Pennsylvania and that there may be no going home for them – ever.

Director M. Night Shyamalan has had a very public career, becoming a wunderkind right out of the box with a pair of really well-made movies. The next two weren’t quite as good and since then he’s been on a terrible streak of movies that are, to be generous, mediocre at best and downright awful at worst. The good news is that this is his best effort in nearly a decade. The bad news is that isn’t saying very much.

Shyamalan uses the found footage conceit which has gotten pretty old and stale at this point. To his credit, he does as good a job as anyone has lately, but he also violates a lot of the tropes of the sub-genre, adding in graphics and dissolves which kind of spoil the illusion of watching raw footage from essentially home movies. I have to say that I think it was a tactical error to do this in found footage format; the movie might have been stronger had he simply told the story using conventional means.

Shyamalan has had a history of finding talented juvenile actors and extracting terrific performances from them; DeJonge is the latest in that string. Yes, she can be too chipper and too annoying, but then again when you consider the age of her character that’s not out of step with how young teen and preteen girls behave. She’s just so, Oh my God!

Oxenbould isn’t half bad either, although his character who is gregarious, outgoing and a little bit too smug for his own good can be grating from time to time, particularly when he starts to rap. Misogyny isn’t cute even when it’s coming out of the mouth of a 12-year-old and some of the lyrics are borderline in that regard. It may be authentic, but ending each rap with a reference to a fairly unflattering portrayal of women is something I could have done without.

Tyler is something of comic relief here and he does it pretty well. I liked the business of him deciding to clean up his language by using female pop singers names in place of expletives, like shouting “Sara McLaughlin!” when he stubs a toe, or “Shakira!” instead of a word for excrement. It’s a cute idea and I have to admit I chuckled at it but again, seems to reflect a fairly low opinion of women.

Shyamalan excels at making the audience feel a little off-balance and while the twist ending here (you know there had to be one) isn’t on par with some of his others, it is at least a decent one. There are a few plot holes – early on Shyamalan makes it clear that there’s no cell phone service at the farmhouse and yet the kids are able to get on a laptop and use Skype. Where’s the Wi-Fi coming from? Perhaps the aliens from Signs are providing it.

Nonetheless, this is a pretty taut suspense movie that has elements of horror in it and makes for solid entertainment. Fans of Shyamalan will welcome this return to form while those who take great delight in trolling the man may be disappointed that he didn’t serve up another helping of turkey. Think of this as kind of a pre-Halloween thriller and don’t pay too much attention to the man behind the curtain; hopefully this will signal that Shyamalan is back on track and ready to fulfill the promise that he exhibited nearly 20 years ago. 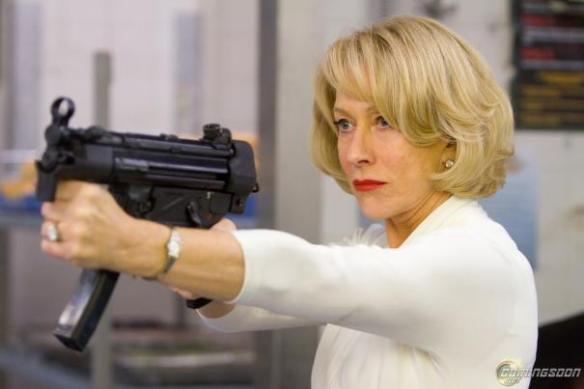 Here's the real reason you want to see the movie.

It’s no secret that our society is extremely youth-oriented. Our elderly we have a tendency to marginalize and cast aside like a used DVD player when the Blu-Ray came out. However, we do so at the potential cost of underestimating the contributions that can still be made by senior citizens.

Frank Moses (Willis) is a retiree living in a small apartment in Cleveland. His life is a quiet one, the highlight of his day being regular phone conversations with Sarah Ross (Parker), a caseworker for the government pension plan who supplies Frank with a monthly check. It’s obvious Frank is attracted to her and she to him; she continues to talk about it while casting nervous glances around to avoid being detected by a disapproving supervisor. They make plans to meet in her home town of Kansas City.

Not long after that he shows up in her apartment, waiting for her there when she comes home after yet another epic fail of a date, babbling wildly about assassins that are after him and that they’re now after her because she’s been talking to him. When she doesn’t believe him, he duct tapes her mouth shut and kidnaps her, driving her to New Orleans. He stashes her in a hotel while he goes to visit Joe Matheson (Freeman), who lives in a rest home where he mainly ogles the nurses, and tries to find a dignified way to die from Stage Four liver cancer. They figure out that someone within the CIA has put a hit out on Frank, but nobody can really figure out why.

Neither can Cooper (Urban), a ramrod-straight CIA operative who has been tasked with taking out Frank. His boss (Pidgeon) sends him down to the archives where Henry the Records Keeper (Borgnine) holds sway. Cooper discovers the “analyst” he’s been told to take out is in reality an ex-field agent who was one of the best the CIA ever had, the kind of guy who toppled governments all by his lonesome once upon a time. Cooper, a family man, is none too pleased by this turn of events but he is, after all, a Company man.

In fact, there’s a conspiracy that goes back to a black ops mission in Guatemala in the 80s and a political situation that is a little more present-day. Frank assembles his old team including Joe, Marvin (Malkovich), a twitchy sort who developed extreme paranoia after being injected with LSD every day back in the 60s, and Victoria (Mirren), a deadly assassin who can best be described as Martha Stewart with a machine gun. There’s also Sarah, who’s now aboard with the program, and Ivan (Cox), an ex-KGB agent who once had a thing for Victoria, and an evil industrialist (Dreyfuss) who knows all the secrets behind the assassins on their tails.

The movie is based on a Warren Ellis comic book that DC published a few years back; it’s much in the vein of The Losers and The Expendables from earlier this year. Schwentke, who we last saw directing The Time Traveler’s Wife, rebounds with a movie that has much more of a fun side than that movie and is much more entertaining at its core.

Part of that is the cast that would have made heads turn ten years ago. Willis always seems to be winking at the audience when he does these kinds of roles, kind of a John McLean/Jason Bourne love child who has Vin Diesel’s hair stylist. Parker, who of late has become best-known for her work in the Showtime series ”Weeds,” could use some “less is more” philosophy in her acting style but is solid as the romantic lead.

The supporting roles are mostly juicy and the outstanding cast makes full use of them. Freeman is wasted in a role that isn’t really drawn very completely, but Malkovich can chew scenery with the best of them and he does so here. Cox is a truly underrated actor who has become a dependable character actor, giving his character a bit of a twist on the KGB agent with a heart of gold that Robbie Coltrane nailed in the Bond movies and Mirren is…well, Helen Mirren. She can make even bad movies much better, and she takes an unlikely role and just about steals the movie.

The plot is paper thin and twists and turns, ultimately leading nowhere but it’s really meant to be a vehicle for the action sequences, which are solid although not outstanding. Red doesn’t really require a whole lot of thought and delivers a quite a lot of entertainment for the money. It may suffer from a few action movie clichés (like bad guy marksmanship disease, and plucky heroine syndrome, and perhaps a touch of dirty old man-itis) but all of that can be overlooked in the grand scheme of things. After all, nobody goes to an action movie for the plot.

REASONS TO GO: You do see the picture at the top of the blog, don’t you? Great cast, mindless action and a good deal of fun.

REASONS TO STAY: It’s a bit on the fluffy side and the action sequences really don’t add anything to the genre.

FAMILY VALUES: There’s some violence and some bad language but probably nothing I wouldn’t hesitate to show most middle school-age kids.

HOME OR THEATER: There are a few scenes that probably work better on the big screen but overall I’d say this is more of a home video experience.