While Planet 51 is something of a disappointment, animated features have been a major part of the Hollywood landscape since 1939 and with the advent of computer animation have become even more of a dominant force at the box office. While Pixar Studios has dominated both in terms of quality and box office, nearly every major studio has an animated division and the quality of some of these studios has been growing both in terms of animation and storytelling, with DreamWorks animation leading the way. Still, Disney and Pixar are the 400 pound gorillas of the genre, and when most aficionados come together to discuss their favorites, those two studios are going to receive the lion’s share of attention.

While cartoon shorts had been a part of the landscape since the silent era, it wasn’t until Snow White and the Seven Dwarves (1937) that Walt Disney thought to make a full-length movie of a cartoon. Even now, nearly 75 years later, the movie holds up. The hand-drawn artwork is simply astonishing in its beauty; Disney made sure that the first animated feature, a calculated gamble, had no expense spared. It remains one of the most beautiful animated features ever drawn. Shrek (2001) established DreamWorks Animation as a major player in the field and would inspire three sequels, paving the way for movies like Kung Fu Panda and Monsters vs. Aliens. Peppered with pop culture references and sly satire, the fairy tale gone hideously wrong sported an all-star cast and impressive animation in becoming the most successful feature animated franchise of all time. Akira (1988), based on one of Japan’s most honored comic books (manga) of all time would set the standards for anime, the uniquely Japanese form of animation. Directed by Katsuhiro Otomo, creator of the original manga, the finely-detailed world of Neo-Tokyo would become a hallmark of the kind of animation that would come out of Japan for the next two decades. A live action version of the movie has been in the works for decades but so far nothing has come of it. Finally, Bambi (1942) bears a personal place on this list – it is the first movie I ever saw in a theater, way back in 1964 when I was just four. Even today, I find myself entranced by the lush, verdant forest scenes and feel the tears welling up when Bambi’s mother is shot.

Animated features had always been somewhat looked down upon by critics and the Hollywood mainstream as “kids stuff” and ghettoized in that fashion – until this movie became the first animated feature to be nominated for a Best Picture Oscar. It was the last movie to be worked on by composer Howard Ashman who passed away before the film was released, and features beautiful music and a timeless story. This was a movie to truly recapture Disney magic and is as good if not better than their classic animations, most of which could easily be on this list but this one was special. It also was a precursor to things to come with extensive digital animated sequences, including the ballroom scene depicted here, as well as hand-drawn animation. This is the favorite of many families, including ours. 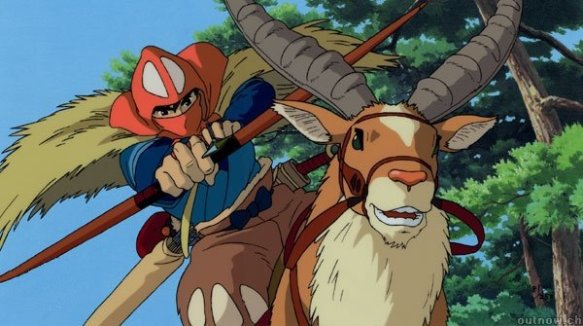 There are other works of Hayao Miyazaki that are better known and quite frankly, better respected than this one but it is this fantasy film that brought me into his world and has kept me there ever since. Miyazaki is perhaps the most respected animator working today and certainly one of the best ever to come out of Japan. In this allegory that depicts the conflict between nature and technology, he brings fantastic characters to life in an almost fable-like setting with hints of science fiction and high fantasy throughout. It’s a masterful work not only of animation but of storytelling as well, and while it never received the acclaim his other works (such as Spirited Away and Ponyo) got, it nonetheless is my favorite of his both sentimentally and critically.

It’s no secret that I’m a comic book junkie, particularly of the superhero variety. Yes, I love all those spandex wearing characters from DC to Marvel and when Pixar decided to make a feature length film about a superhero team that was also a family, I was over the moon to say the least. The final product didn’t disappoint. My initial fears that the genre would be disrespected and dumbed down (as other films like Zoom and Sky High had done) were groundless; this was clearly a labor of love that not only poked gentle fun at the genre but also told a compelling story about family dynamics changed by the advent of great powers. Something like the Fantastic Four done for the Family Channel with a villain straight out of a hip James Bond movie, I was enchanted by every moment of this movie which remains one of my all time superhero favorites.

The idea of animation as a work of art had never really been as explored quite as completely as it did on this film, which was one of Walt Disney’s pet projects and clearly something close to his heart. Vignettes set to classical music pieces (such as Stravinsky’s The Rite of Spring and Mussorgsky’s A Night on Bald Mountain) used whimsical Disney imagery to create a breathtaking work that elevates as it entertains. In many ways, Fantasia is a cultural landmark although it was never a commercial success; today it is best remembered for the one vignette featuring Mickey Mouse – The Sorcerer’s Apprentice which was spun off into its own movie that had very little to do with the original. A sequel, Fantasia 2000 came out just in time for the new Millennium; while it captured the spirit of the original, it wasn’t quite as impressive.

Only the second animated feature to receive an Oscar nomination for Best Picture, this movie has clearly elevated the bar for animated features. Very few movies can walk the fine line between appealing to children and telling a sophisticated story that will stimulate adults, but this one does, creating timeless entertainment in the process. The opening montage telling the story of balloon salesman Carl Fredricksen and his wife Ellie is both charming and poignant and was one of the most memorable moments in the movies last year. It cements Pixar’s position as the most innovative studio of any sort out there, churning out high quality films year after year. Whether they can ever produce a movie this good again is almost irrelevant; the fact that they proved that it can be done has changed the standards for animated movies from disposable kids stuff to important cinema for everyone.