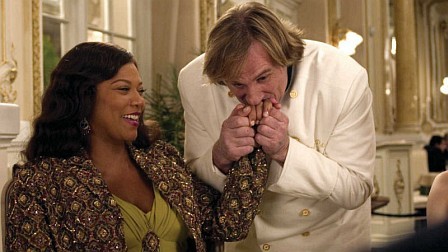 We are most of us so busy making a living that we forget to actually live. Our noses are so far down to the grindstone that we fail to notice the blue sky and sunshine above our heads. We certainly are prone to forgetting that our lives are short and can end without warning; so many of us leave it with so many of our dreams unfulfilled.

Georgia Byrd (Latifah) works at a New Orleans department store giving cooking demonstrations and selling cookware. She is crazy about co-worker Sean Matthews (LL Cool J) but is far too shy to make a move. She goes home at night and watches cooking shows, making gourmet recipes that she serves to a neighborhood kid (Washington) while she consumes Lean Cuisine frozen meals because she’s dieting.

One day at work she hits her head and loses consciousness. She is taken to the store infirmary (do any department stores really have those? Outside of Harrods in London I mean) where Dr. Gupta (Chowdhry) takes a CAT scan on the used machine he has just received and to his horror discovers several brain tumors – products of the rare condition Lampington’s Disease. The size and location of the tumors indicate that Georgia is in the final stages of the Disease and has only a few weeks. The operation that might save her may well do no good at all and the prohibitive cost of the potentially life-saving surgery is something her HMO won’t cover. Georgia hasn’t the time to contest it.

She decides to spend her final Christmas season at the Grandhotel Pupp in Kylovy Vary, Czechoslovakia. It’s an exclusive resort but Georgia has been frugal and has accumulated a pretty good amount in her 401k so she cashes it out and flies out to Czechoslovakia. Why there? Why, her favorite chef – Didier (Depardieu) is the executive chef there.

Once there she intends to indulge herself and pamper herself with spa treatments, skiing lessons and of course sampling one of everything from the Chef’s menu. He is so grateful that she is not another diet-conscious American requiring substitutions of “healthy” ingredients that he comes out to meet her himself. This draws the curiosity of a neighboring table where Senator Dillings (Esposito), Congressman Stewart (Nouri) are sitting, as well as the man who is wining and dining them – Matthew Kragen (Hutton) who happens to own the department store chain where Georgia was formerly employed. He sics his assistant Ms. Burns (Witt) with whom he is also having an affair with on Georgia to find out just who she is. The paranoid Kragen is concerned she’s out to ruin his deal that the support of the politicians is crucial for.

Her can-do attitude and positive outlook are inspiring to the lot of them and the more enchanted they become with Georgia, the more suspicious Kragen gets. He gets the officious Gunther (Kellermann), a hotel concierge, to go through Georgia’s things. Gunther discovers that Georgia, whom all the others (as well as the hotel staff whom Georgia treats with kindness and respect – something they aren’t used to) assumes is extremely wealthy, is a store clerk in one of Kragen’s stores. But her triumph quickly turns to shame when she discovers a letter that Georgia has written instructing hotel staff what to do should she pass away while she’s at their hotel.

Sean, in the meantime, decides that he needs to tell Georgia how he feels about her (it turns out the feelings were mutual) and decides to fly to the hotel to do just that. However a blizzard has made getting there precarious and Georgia herself has decided she’d rather spend her last days at home. Will the two be able to get together before the end?

This is a remake of a 1950 comedy starring Alec Guinness in the role Queen Latifah plays here. It’s a very different movie, somewhat more witty and a good bit darker (there’s an astonishing twist that you WILL not see coming near the end of that picture that is absent here). This is much more heart-warming, a kind of a warm hug on a winter day by a beloved friend. Latifah shows her chops as a leading lady; she’s done a lot of comedies both before and since but this is really in many ways the best of the lot.

Georgia starts out kind of mousy (which is really playing against type for Latifah) but good-hearted and as she finally comes out of her shell and allows herself to live we get a sense of the joyfulness she has inside her. She simply learns to enjoy the things that are good in life; good food, good friends, taking risks and trying new things. It’s a lesson not all of us learn in many more years of life than Georgia has lived.

The supporting cast is particularly solid, with kudos going to Depardieu as the chef who feels underappreciated (although with the foodie revival of the last few years he may be feeling better these days) and Hutton who’s Keegan is a greedy paranoid bastard but not altogether without saving graces. LL Cool J, who has become quite accomplished as an actor since on L.A. NCIS shows some good chemistry with fellow rapper Latifah.

This isn’t a particularly remarkable story – even in 1950 when Guinness did it this was pretty tried and true stuff. It’s simply done very well here, largely due to the screen presence of Latifah who makes the audience feel like old friends. Much of why the movie works is due to Latifah who simply makes this movie a vehicle for her personality. While some of the dialogue is clumsy and has the characters saying things that human beings don’t say in reality, it can be overlooked if for no other reason for the warm fuzziness coursing through your veins when the end credits roll.

WHY RENT THIS: Really heart-warming. Latifah shows that she can carry a film on her own here. Depardieu is a whole lot of fun here.

WHY RENT SOMETHING ELSE: The dialogue can be awkward. A bit too rote in places.

FAMILY VALUES:  There are a few sexual references but nothing too overt.

TRIVIAL PURSUIT: During the scene where Georgia is serving Sean duck hash on toasted baguette, the Food Network chefs who were advisors and on-site chefs had to substitute for the duck in Sean’s portion because actor LL Cool J doesn’t eat duck.

NOTABLE HOME VIDEO EXTRAS: There are a couple of Wolfgang Puck recipes that you can make at home, as well as an interesting featurette as to how this remake nearly hit the screen in the mid-80s…starring the late John Candy, which was shelved at the comedian’s death until Latifah’s agent read it and thought it would make a great starring vehicle for his client.

NEXT: John Dies at the End

Chris Rock and Martin Lawrence wonder if they should have remade Four Weddings and a Funeral instead.

A funeral is a time for somber reflection, to celebrate the life of someone who’s passed on. It is not a time for hi-jinks, which is why a movie about such tomfoolery is ripe to be funny – and was, in a 2007 British movie on which this was based.

The patriarch of an African-American family has passed away and his son Aaron (Rock) is organizing the funeral at the family home per daddy’s instructions. Aaron has dreams of being a writer, like his successful brother Ryan (Lawrence). Aaron’s mother (Devine) wants a grandchild, the lack of which she attributes for her husband’s death. His wife Michelle (Hall) is with mom, but she also wants to see Aaron give up on his dream and get to reality.

There are others coming to the funeral. Cantankerous Uncle Russell (Glover), Norman (Morgan) the hypochondriac, Elaine (Saldana) who has accidentally slipped her nervous white boyfriend Oscar (Marsden) a powerful hallucinogenic, and Derek (Wilson), Elaine’s ex who would love to get her back.

Throw in Frank (Dinklage), who had a homoerotic affair with the deceased and now wants to get paid (which astonishes Aaron that his brother is upset about it – not that Daddy’s butt buddy is short but that he’s white) and a mix-up regarding who’s in the coffin and you’ve got hi-jinks at a funeral, which is pretty much what a good comedy pitch would be.

Director LaBute has some of the most accomplished comics of our generation working in this movie; in all honesty, this should have been way funnier than it was. The problem here is not with the talent but with the energy – it seems to be more shtick than inspired. There are plenty of bits and some of them are rather funny – Marsden nearly steals the movie with his spaced out yuppie. Mostly the problem is that the characters are just so one –dimensional; they seem to exist to fill spots in the shtick, rather than to be living, breathing people for the viewer to relate to.

Rock, who is one of the funniest men on the planet when he is doing his own material, seems curiously subdued and even bored. He goes through the motions to my mind, and in many ways that’s the most egregious disappointment here. I really like Rock as a comedian and a comic actor but this seemed to lack energy and focus. I suspect he found the role to be so underwritten that he kind of just decided to phone things in.

Lawrence fares a little better but only a little bit. He has a bit more manic energy than the others, which helps him stand out. At the end of the day, however, his character is a bundle of clichés that never really gels into a cohesive whole. He does his best with it but by the end of the movie you can scarcely remember who he was playing or what motivated him.

Other than Dinklage and Marsden, most of the supporting cast is equally as forgettable and that’s a bloody shame. There is enormous talent here and it’s almost criminal that it was squandered so miserably. The movie that this was based on (and re-written by the original scribe) had some issues as well – that movie went for stuffy a little bit more than it needed to. Somewhere in between that movie and this one there is a comedy classic, but sadly it never really manifested itself in either movie. There are moments here that underscore the potential, but not enough to make you wish that the movie was the one in the coffin.

WHY RENT THIS: There are some great comedians in this movie.

WHY RENT SOMETHING ELSE: They don’t really have a lot to work with.

FAMILY VALUES: There is some drug use as well as a fair bit of foul language and a bit of sexually based humor.

TRIVIAL PURSUIT: Peter Dinklage is the only actor to appear in both the 2007 movie and the remake in the same role.

NOTABLE DVD EXTRAS: There is a gag reel and on the opposite end of the spectrum, a featurette in which the cast gives their thoughts on death and grieving. Huh?