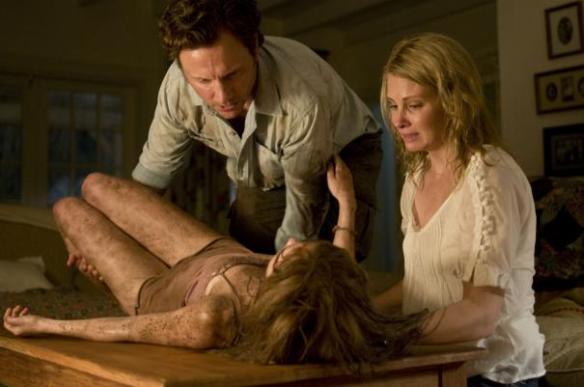 Not a pleasant family reunion.

Vengeance is mine sayeth the lord, but if someone brutalized your daughter and fell into your hands, would you trust in the Almighty for justice or might you take your own pound of flesh?

John Collingwood (Goldwyn) is a successful doctor with a summer home on a lake in the middle of nowhere. After the untimely death of their son, he and his wife Emma (Potter) have taken their younger daughter Mari (Paxton) to the lake house for some much needed R&R.

Of course, as is the way with teenagers she is far more interested in spending her first night in the country with her local friend Paige (MacIsaac). Mom is not so keen on the idea – their daughter, a champion swimmer and solid student tends to be swayed by the more party-oriented Paige –  but easygoing Dad says okay. He has to fix a balky microwave in any case and relishes the idea of an evening alone with his wife. There’s a storm on the way in any case and Mari would probably be heading back to the house about the time the storm hit.

Paige and Mari are bopping around town with nothing in particular to do. They hang out at the local convenience store where they meet a young boy named Justin (Clark) who’s trying to score some cigarettes. They head over to Justin’s hotel room to score some weed or at least Paige does.

Right about then Justin’s folks arrive; Dad Krug (Dilahunt), Dad’s girlfriend Sadie (Lindhome) and Dad’s ADHD brother Frank (Paul). Unfortunately for the girls, Dad was just busted out of prison in a particularly violent and bloody fashion by Sadie and Frank. With the law on their tails, this is no time to bring two young girls who might be able to identify them into the mix. The criminals kidnap the girls and steal their SUV.

An attempted escape by the plucky Mari leads to the SUV being totaled. The predictably unhinged Krug rapes her and shoots her, murdering Paige in the process. However, the long-promised storm arrives and the dysfunctional family finds refuge in the only house around…and I’m sure you can guess who lives there by now.

This is based on a 1972 movie of the same name by Wes Craven, which was in turn based on a 13th century Swedish folk tale which was also made into a movie by Ingmar Bergman called The Virgin Spring back in 1960. The Bergman movie is the best of the lot but the new 2009 version compares quite favorably in some ways with the original Wes Craven version.

First of all, the Craven version was very much a product of its era, with a kind of hippie loss of innocence theme. The violence was much more sadistic in that version, with Paige and Mari forced to have lesbian sex and one of the girls forced to urinate in her pants, not a particularly pleasant scene.

Here the violence is mostly directed in the rape sequence, which is quite brutal and realistic. There’s nothing sexual about it and quite frankly, that’s as it should be.

The vengeance factor was more prevalent in the first film, in which the father discovers that the brutalizers of his daughter are being harbored under his own roof. In the most recent version, the violence is less a matter of vengeance than of protecting Mari, who has shown up on her doorstep barely alive. In that sense I think the initial movie was more thought-provoking; who wouldn’t want to protect their daughter but how far would you go to avenge her? That’s the crucial difference between the two movies and the biggest misstep the remake takes.

Goldwyn, Dilahunt and Potter are all solid actors with dozens of good performances behind them, and this occasion is no different, particularly for the first two. Potter is okay as well but she really doesn’t have as much to do except in one scene, where she is trying to keep Frank’s attention away from the living room where her daughter is and does it by coming on to him, despite her revulsion at the idea. It’s one of the few scenes that really explores the idea of “how far would a parent go for their child” and it is one of the more effective sequences in the movie.

Most horror movies in the 21st century tend to rely on violence and gore; sexuality has been removed from the equation. The sad truth is that horror movies are much blander today than they were twenty and thirty years ago, despite improvements in filmmaking technology. We can make better monsters but have failed to make better human ones.

The violence here is more brutal than most modern audiences are used to and you should be prepared for that. This is actually a pretty well-made horror thriller and it might have been a little bit better if they had followed the original a bit better. Not so much in the degrading of the two victims but in the motivations of the parents. That’s where the real horror lies.

WHY RENT THIS: Horror should be disturbing and this certainly is that. Dilahunt and Goldwyn are pros and carry out their tasks well.

WHY RENT SOMETHING ELSE: May be too brutal for those used to the whitebread, colorless horror films of the 21st century. The most thought-provoking element of the original is excised from the new one making it less interesting.

TRIVIAL PURSUIT: Producer Jonathan Craven is the son of the director of the 1972 version Wes Craven. He appeared in the original version as a young boy whose balloon is popped by the vicious Krug.

NOTABLE DVD EXTRAS: The director’s cut is featured on the Blu-Ray and unrated DVD versions. It is only a few minutes longer with most of the additional footage taking place during the rape sequence.

TOMORROW: Mozart and the Whale