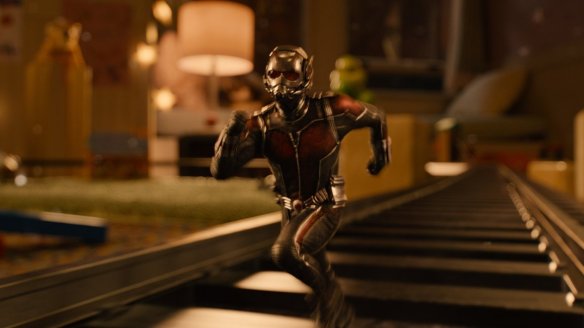 Ant-Man on the wrong side of the tracks.

Good things come in small packages. It’s a truism that was likely created by short people. Still, it can be true even for superheroes.

Scott Lang (Rudd) is not a thief. He’s a burglar. But not your ordinary burglar. He’s a man with a Masters in Electrical Engineering and plenty of skills with a computer. He saw that a software company had been ripping off its customers, so he decided just to return the funds they had been overcharging to their customers. Kind of a modern day Robin Hood.

But even though his good buddy Luis (Pena) puts him up, Scott is finding it hard to make it in the outside world. Even a job at Baskin-Robbins doesn’t pan out when they find out he’s an ex-con. Baskin-Robbins always finds out. Anyway, his ex-wife (Greer) doesn’t want him anywhere near their cute daughter Cassie (Fortson) and her new husband Paxton (Cannavale), a cop, is going to make sure he stays away.

Hank Pym (Douglas) is a brilliant inventor who came up with a particle that compresses molecules, enabling the wearer of the suit he invented to utilize them to shrink to the size of an insect. He left SHIELD after a disagreement with Howard Stark (Slattery) and more to the point, Mitchell Carson (Donovan) led him to resign.

He entered the private sector and took on a protégé named Darren Cross (Stoll). After the death of his wife, Janet van Dyne (Lovitt) led to an estrangement with his daughter Hope (Lilly) to the point where she now uses her mother’s maiden name as her own, he had largely left the company. He only came back in because Cross was on the verge of discovering the secret to his particles – and planned to use a weaponized version of the suit to sell to the highest bidder. He needs someone to steal the suit and erase all the data from the system pertaining to it. But who could pull it off?

Of course it’s Scott Lang. And he and Hope (who, finding out about Cross’ plans has teamed up with her father) have a very short time to train Scott in using the suit properly, to fight effectively in it and use all the properties (like controlling ants) to become a hero in his own right. But will it be enough to beat the villainous Yellowjacket – the alter ego of Cross?

One of the things I have admired most about the Marvel Cinematic Universe is that the movies are not interchangeable. Each of them has their own style and Ant-Man continues that tradition. This is much more light in tone than the previous entries in the Marvel Universe, more like Guardians of the Galaxy than Avengers: Age of Ultron, the latter of which immediately preceded it in the Marvel timeline.

And maybe the MCU needed it; I think that other than the staunchest of Marvel fans were feeling a touch of burn-out after Age of Ultron. For whatever reason the powers-that-be at Disney decided that this would come out a mere two and a half months after the preceding movie which is a poor tactical decision and will likely cost this movie millions of box office dollars. Perhaps they just wanted a longer gap between the movie that ends Marvel’s Phase II (which this one does) and the one that begins Phase III (which Captain America: Civil War will on May 6, 2016). Still, with the Avengers still in a lot of theaters, it doesn’t make sense to release this one. I guess they’re getting ready to ratcheting up the film production to three a year rather than two which Marvel is planning on doing in 2017.

In any case, I suspect that the relatively low box office numbers (which would still be the envy of plenty of summer films) is largely due to the short turnaround. It may also be due to fan dissatisfaction over the change in director (see below) as fan favorite Edgar Wright left (or was forced out as many conspiracy-minded fanboys have opined) and Peyton Reed came aboard. I can’t say that Reed was a crackerjack replacement, but he does tend to keep things very simple in terms of framing shots and blocking action, but he also realizes this is necessarily effects-driven and allows the digital wizards to do their thing and do it they do.

The effects are for the most part well-executed, although the 2001-style sequence near the end of the movie as Scott enters the Microverse is a bit psychedelic, some might even say Dali-esque. The movie works best when they are in the world with ants as big as SUVs and where Thomas the Tank Engine becomes a runaway locomotive.

Rudd has always been a personable actor with a flair for the sarcastic and his winning personality is at full throttle here. He has bulked up his musculature to superheroic proportions and despite the fact that he is playing a convict (albeit a philanthropic one) the audience roots for him from beginning to end. There were those who might have rolled their eyes when he was cast but again, it turns out to be perfect casting as Marvel seems extremely adept at matching their superheroes with the right actors to play them.

I’ve always been a big Michael Douglas fan and for me, he is the best reason to go see this. Hank Pym is undeniably the best character he’s gotten in ages and this is his best performance in years. This is the Michael Douglas we remember from such films as Romancing the Stone, Wall Street and Fatal Attraction. He owns the screen every time he’s on it.

In the supporting realm, Evangeline Lilly is somewhat enigmatic in her pageboy haircut that reminded me of silent movie star Louise Brooks; ever since her breakout performance in Lost she hasn’t really gotten a part that takes advantage of her skills until now. Hopefully she’ll get plenty of good parts off of her performance here. Also Pena shows remarkable comic ability here; he has tended to play second banana roles for the most part – lots of cops on his filmography – but he steals the show here.

The light-hearted tone may be disappointing to fans who prefer their superheroes dark and undoubtedly we’ll get plenty of that in the next several Marvel films starting with Fantastic Four next month. Still, this is fine summer entertainment, better than the majority of the blockbusters that have appeared this summer to date and that’s saying something. This won’t stand up with the best of the Marvel Cinematic Universe but it won’t disappoint either. Marvel keeps on rolling and I for one continue to look forward to each new Marvel movie with anticipation.

REASONS TO GO: A little more light-hearted than most superhero films. Douglas gives his best performance in years.
REASONS TO STAY: May be too light for hardcore fans.
FAMILY VALUES: Superhero-style violence.
TRIVIAL PURSUIT: The film was originally developed by Edgar Wright who had brought the film to casting; however he dropped out at the 11th hour due to creative differences with Disney who had bought Marvel Studios in the intervening years; Reed stepped in, retaining the cast Wright had chosen.
CRITICAL MASS: As of 7/26/15: Rotten Tomatoes: 79% positive reviews. Metacritic: 64/100.
COMPARISON SHOPPING: The Incredible Shrinking Man
FINAL RATING: 7/10
NEXT: Shaun the Sheep Movie