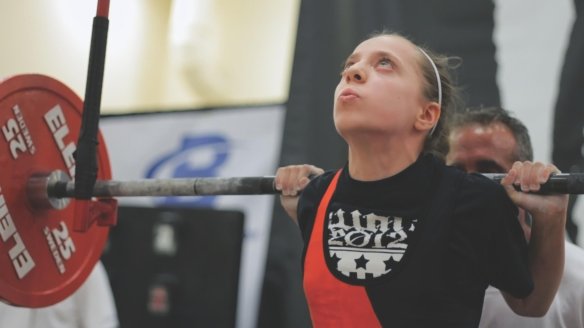 A young woman who is strong as she is beautiful.

Sometimes young people come along who are just extraordinary. They stand out as having passions, being goal-oriented, natural leaders. Naomi Kutin is just such a person.

When we meet her in this documentary she is just 10 years old but she already owns the power lifting world record in the 97 pound class. She routinely beats people twice her age. During the course of the film we watch in awe as she lifts three times their own body weight. To quote the title of a mostly-forgotten 70s television show, that’s incredible.

Her parents are extremely supportive. Her father Ed is a power lifter as well and often competes in the master class at the same meets his daughter does. He has been training her from the time she expressed interest in the sport. Her mother Neshama who converted to Judaism is also extremely supportive but is very careful to make sure Naomi gets to express other sides of her personality as well. In the meantime, she goes to all of the competitions her daughter lifts at and shouts encouragement from the sideline; “Go Supergirl,” the nickname that she and Naomi’s friends have bestowed upon her. There is also her younger brother Ari who is in the autistic spectrum but who clearly adores his big sister – a feeling that is amply returned by Naomi. She is protective of him and encourages him when he also takes up an interest in power lifting.

In fact Naomi and Supergirl are almost two different people. Naomi is a devout Orthodox Jew but also a modern little girl who titters over boys with her friends, likes bright colors and is aware of all the pop culture touchstones that girls her age are into. Supergirl is a dedicated and focused athlete who spends most of her time training and before lifting psychs herself up with primal screams and grunts that you wouldn’t expect coming out of the mouth of a 10-year-old…or anyone else.

Auritt shot the documentary over the course of three years, from the triumphs of re-setting the power lifting record for her weight class to her struggles to stay in that class even as she is growing out of it. Much of Naomi’s self-identity, at least early on, is wrapped up in her world records. As it becomes clear that her body is growing into the next weight class, Naomi is dead set on keeping her weight at 97 pounds even though she is taller and not as centered as she was before her growth spurt.

Even as Naomi is wrestling with the inevitability of her weight increase, she is dealt a devastating blow as she begins to get terrible migraines. Soon it becomes clear that the cause of her migraines is her training and weightlifting; the doctors advise her to give it up but Naomi doesn’t want to. At first she fights through the pain but when she can no longer do that, she tries to find alternative solutions to maintain her health and still compete in the sport she loves at the level she is used to. As we watch, there’s no guarantee that she’ll be able to have what she wants.

What the movie makes clear is that Naomi is not the victim of stage parents who live vicariously through her achievements; nobody who is this dedicated and this focused does what Naomi does because they’re trying to please their parents. Her passion for power lifting comes straight from the heart. I’m sure there will be people who see this who will criticize the parenting going on, but personally I don’t think that’s valid. There are trolls all over the Internet as we see when Naomi reads some cruel comments that appear on her Facebook page. People really do suck sometimes.

It is also fascinating to watch how the Kutin family reconciles the weightlifting with their religious beliefs, although there are a few questions I have; their faith requires that there can be no electrical devices used during the Sabbath but we watch them on one occasion observing the Sabbath as a family; isn’t the camera an electronic device? Perhaps I’m ignorant of what is allowed on the Sabbath and what is not. Still, it is refreshing to see just how normal this family is other than the constant training. Watching Naomi and her mom go dress shopping for Naomi’s bat mizvah is about as fun as being there with them. In a sense, we are although of course we get no input into the dress Naomi chooses. Pity, that, because I have excellent taste in dresses. Moving along….

It is clear that the director has a good deal of affection for the subject of her documentary and who can blame her? Naomi is an extraordinary little girl. And for the record, she’s a beautiful girl who is going to grow to be a beautiful woman. She may power lift but she’s not sacrificing an iota of her femininity for it. I sense that her mother is seeing to that to a certain degree, but the fact is that Naomi just plain likes being a girl.

The story is pretty straightforward and told in a manner that is easily followed; Auritt doesn’t augment her film with animations or graphics for the most part other than the bare minimum. This is a traditional documentary style which is a good thing as far as I’m concerned. Auritt wisely chooses not to reinvent the wheel and just presents Naomi’s story mainly in Naomi’s own words. The talking heads mainly belong to her parents.

This isn’t the kind of documentary that is going to change your life for the most part. It is the story of a focused and special young woman and to be fair it will be inspirational to many. The takeaway is that those who are willing to put in the time, discipline and work to achieve their dreams can achieve them regardless of their age or size. That’s a good lesson, but not one that hasn’t been given in other films as well. Naomi Kutin is a special little girl and I think you’ll enjoy watching her story. You might even be inspired to go beyond your own limits in the thing your passionate about. And that, as it turns out, is what life is all about.

REASONS TO GO: Naomi is an impressive young person. The film gives us a glimpse into the daily life of an Orthodox Jewish family in a way that is very simple and direct.
REASONS TO STAY: The film isn’t as compelling as it might be. There are some incongruous moments.
FAMILY VALUES: There isn’t anything here that I wouldn’t feel concerned about allowing children or young people to see.
TRIVIAL PURSUIT: Auritt got the inspiration to do the film after reading a profile of Naomi online.
CRITICAL MASS: As of 5/1/17: Rotten Tomatoes: No score yet. Metacritic: No score yet.
COMPARISON SHOPPING: First Position
FINAL RATING: 6.5/10
NEXT: Tickled 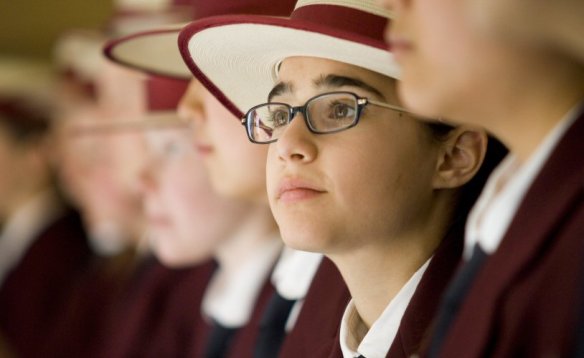 The world has a sunnier outlook when seen from under a straw boater.

Growing up is hard enough as it is. Growing up different  and longing to be normal – well, that’s pretty much how all of us perceive our adolescence. We all aim to be accepted and to fit in, but what is normal really? And how many of us fit the description?

Esther Blueburger (Catanzariti) is a 13-year-old girl in an exclusive Australian private school who yearns for that normalcy. Her twin brother Jacob (Byers) is a complete nerd and a social horror show but at least the two get along. Esther, with her glasses and her pet duckling (a foundling she calls Normal, after what she longs to be) is a bit of an odd duck herself, awkward with her classmates. Oh and did I mention that Esther’s Jewish?

Her bat mitzvah is approaching and with reluctant pluck Esther invites her classmates to the event. Of course, none of them show and Esther is mortified. Surrounded with well-meaning but overbearing aunties and relatives, she finds refuge in a nearby alley where she finds Sunni (Castle-Hughes) having a smoke. Sunni attends a public school that has caught Esther’s eye – the students there seem far more accepting.

Esther drags Sunni to her party where she passes her off as a classmate, which reassures her emotionally distant self-centered parents (Davis, Dykstra) who haven’t a clue about the hell their daughter is going through. Sunni, however, gets it much better than they do and the girls hatch a plan. Sunni forges the signature of Esther’s parents on paperwork excusing Esther from the school for a year on an exchange program to Sweden. She then enrolls Esther in the public school, passing her off as an exchange student from Sweden. This makes Esther instantly popular.

The plan works a little too well. Soon Sunni’s friends begin to flock to Esther and ignore Sunni. Esther develops a deeper and closer relationship with Sunni’s exotic dancer mum (Collette). The relationship becomes extremely strained – and a tragedy threatens to dissolve it completely.

This coming-of-age tale arrives to us courtesy of Randall, a soap opera veteran making her feature film writing and directing debut. There are quite a few things to admire about her first movie – among them, Esther herself who has an offbeat appeal. Part of that has to do with her never-say-die attitude; part of it has to do with Catanzariti who has a natural charisma that is readily apparent. If she chooses to pursue the acting thing, she has a bright future.

Castle-Hughes who was so impressive in Whale Rider has a nice role here which is very different. She’s a bit of a tough gal with a heart of gold who at the core is much more fragile than anybody realizes. In many ways I thought her part was a bit more realistic than that of Esther; Castle-Hughes does a fine job bringing it to life.

Teen coming of age movies tend to have an overabundance of quirkiness to them, but this one tones it down to levels where it is actually a bit more realistic. Female leads in these types of movies are exceedingly rare and often have a bimbo aspect to them; this movie is refreshingly sex-free but that doesn’t mean Esther and Sunni don’t have an interest in boys. Okay, more like an obsession. Just like almost every other 13-year-old girl.

WHY RENT THIS: The movie has a goofy charm that gets under your skin.

WHY RENT SOMETHING ELSE: The tragic element seems a little forced and at odds with the movie’s otherwise sunny tone.

FAMILY VALUES: There are a few thematic elements that might be inappropriate for youngsters, a few foul words here and there, some teen smoking and a teensy bit of sexual content.

TRIVIAL PURSUIT: Castle-Hughes was pregnant during the filming of the movie.

NOTABLE DVD EXTRAS: There’s a music video and a more interesting than usual featurette about the casting of Danielle Catanzariti as Esther and how she transformed into the role.