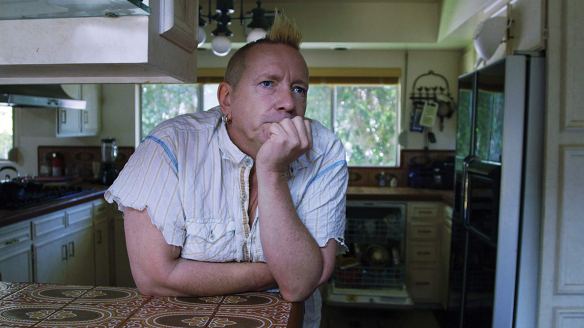 At first glance, doing a documentary on his post-punk project Public Image, Ltd. (or more popularly known as PiL) doesn’t seem to be something John Lydon would be terribly comfortable. Music documentaries by their nature tend to look back; Lydon has always been more interested in what lies ahead rather than what lies behind. However, Lydon has turned 60 and when people get to be more reflective at that age.

For those who don’t know, Lydon was one of the founding members of the Sex Pistols, the band credited with igniting the punk revolution which led to a fertile period in which musicians explored new forms of pop and rock and created music that broke all the rules, then continued on breaking those rules again. The Sex Pistols imploded before much of that happened amid much acrimony; Lydon was famously sued by band manager and control freak Malcolm McLaren who prevented Lydon from using his stage name of Johnny Rotten; the memory still leaves a bitter taste in his mouth although when McLaren passed away in 2010 Lydon paid tribute to the impresario.

Nearly broke and without a means of making a living, Lydon assembled a new band that eventually was named after a book by Muriel Spark with ex-Clash guitarist Keith Levene, Lydon’s former schoolmate Jah Wobble and Canadian drummer Jim Walker. The group released several albums and eventually fell victim to egos and contentious personalities. But that wouldn’t be the end of PiL.

Public Image Ltd. Has been in existence for 40 years now and has consistently pushed the boundaries of expectation, choosing to explore and invent rather than repeat. While they’ve only released ten studio albums in that period, albums like Metal Box and Happy? Have influenced generations of musicians, including Thurston Moore of Sonic Youth, Moby and Flea of the Red Hot Chili Peppers (who was once offered a position in the band but turned it down to remain with his old band), all of whom are interviewed here.

Lydon is a fascinating subject. He is known for his candor and occasionally for genuine introspection. He has a puckish sense of humor (he spends much of the film interview sequences in his pajamas, sitting at a breakfast bar in his kitchen, reheating his coffee in the stove. He is self-deprecating from time to time – he doesn’t take fame very seriously – but when it comes to the music his demeanor is all business. He also keeps his private life as private as possible. His wife Nora doesn’t appear on camera and Lydon doesn’t really discuss how he and his wife have raised her granddaughters (Nora’s daughter is the late Slits lead singer Ari Up) although he does remark that having the kids around has changed him.

Most of the film revolves around the band and Lydon is generally complimentary to former bandmates, although there are exceptions. Of Wobble he said “He contributed a lot but ultimately he took more than he gave,” referring to Wobble’s middle finger exit to the band. Filler at least gives equal time to some of the musicians whom Lydon has issues with. Lydon is a fine storyteller and many of his bandmates – particularly Atkins – are also fine storytellers as well.

Fans of the band – which I was not one of – will appreciate the concert footage of the group, including their notorious Ritz show in New York in which the band chose to play behind a theater screen leading to a near-riot which Lydon gleefully claims is maybe their best live show ever. I have to admit however hearing Lydon talk about the uncompromising nature of the band and their need to continually reinvent themselves made a fan out of me and that’s not an easy thing to accomplish.

If I have any beef with the movie is that we don’t get as much on what motivates some of the stylistic changes that the band went through. I think part of it is that Lydon insists on bringing in musicians who are inventive but also gifted players like Levene, the late John McGeoch, Alan Dias and even Jah Wobble. Still, this may be one of the best music documentaries ever made. Even if you’re not a particular fan of PiL you should still see this; you may change your mind as I did.

The film is currently playing in New York City but will be playing all over the country in the coming months. Orlando residents can see the movie in November as part of the Enzian’s Music Monday series. Tickets for that show are on sale now.

REASONS TO GO: The band’s story is truly compelling. Lydon is an engaging raconteur. The concert footage is wonderful. Interviewing Lydon in his pajamas at his breakfast bar in his kitchen is a stroke of genius.
REASONS TO STAY: We get little sense of the things that influence Lydon in his creative process.
FAMILY VALUES: There is a fair amount of profanity as well as some drug references.
TRIVIAL PURSUIT: This is Filler’s first feature film as a director. He has worked as a cinematographer on other films including Sammy Gate and The Activist.
CRITICAL MASS: As of 9/8/18: Rotten Tomatoes: 60% positive reviews. Metacritic: 66/100.
COMPARISON SHOPPING: The Wrecking Crew
FINAL RATING: 10/10
NEXT: MDMA