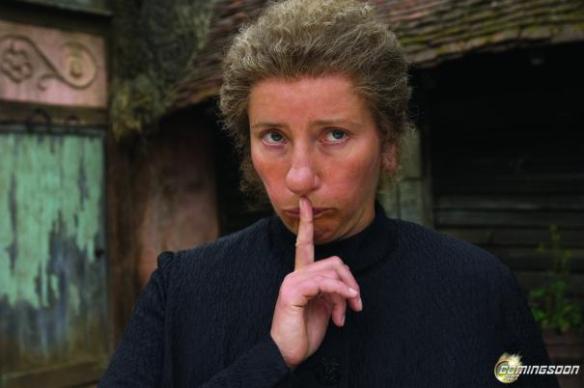 Emma Thompson has a message for the critics.

The sequel to the surprisingly charming Nanny McPhee returns Oscar-winning actress to the role of the magical nanny who appears when she is needed most and wanted the least, this time with an entirely new family in an entirely different era. She must help a rural family and their posh city cousins get along, and along the way help them learn to work together to save the family farm. As there has been only Ramona and Beezus and Cats & Dogs: The Revenge of Kitty Galore to fill the family film market void since Despicable Me, this should do very well even if it’s only halfway decent.

(Sony Classics) Robert Duvall, Bill Murray, Sissy Spacek, Lucas Black. A curmudgeonly hermit in a small Appalachian town during the Great Depression decides that he doesn’t want to miss his own funeral – who knows what is going to be said about him when he’s not around to defend himself – so he arranges with an unscrupulous funeral home director to throw a funeral for himself while he’s still alive. At the funeral, he determines to reveal a secret that will change the lives of those who live in that town for good.

Rating: PG-13 (for some thematic material and brief violent content)

(Warner Brothers) Bow Wow, Ice Cube, Loretta Devine, Bill Bellamy. A neighborhood in the projects is turned upside down when a young man buys a winning lottery ticket worth $370 million. He will have to find away to keep it from larcenous and sometimes underhanded  and even threatening neighbors over the course of a three-day holiday weekend in order to claim his winnings.

See the trailer and featurettes here.

Rating: PG-13 (for sexual content, language including a drug reference, some violence and brief underage drinking)

(Dimension) Jessica Szohr, Richard Dreyfuss, Elisabeth Shue, Jerry O’Connell. The residents and visitors of a small town of Lake Victoria that is also a spring break magnet must find a way not to become chum when a tremor unleashes some prehistoric piranha. Here’s some advice; if you don’t want to get eaten, don’t go swimming!!!!

Rating: R (for sequences of strong bloody horror violence and gore, graphic nudity, sexual content, language and some drug use)

(Miramax) Jennifer Anniston, Jason Bateman, Patrick Wilson, Jeff Goldblum. When Kassie, a hip New York single woman, hears her biological clock ticking down, she decides to have a baby anyway despite the objections of her neurotic best friend. While at a party to celebrate Kassie’s impending motherhood, the sperm donor’s contribution is accidentally lost, forcing the best friend to substitute his own, something he keeps hidden from Kassie for seven years when the progeny of the insemination begins to show character traits disturbingly similar to the neurotic best friend.

Rating: PG-13 (for mature thematic content, sexual material including dialogue, some nudity, drug use and language)

(20th Century Fox) Matt Lanter, Emily Brobst, Ken Jeong, Jenn Proske. A young woman must decide between two boys – one of whom is a vampire, the other a werewolf – and looking incredibly stupid. She picks option “C.”