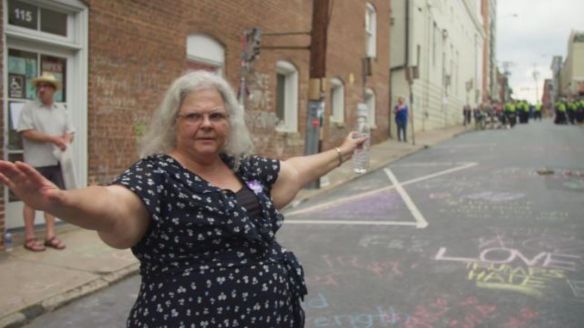 Susan Bro wants to give the whole world a hug.

One thing both the left and the right can agree on is that our country is deeply divided politically. Never since the Civil War have passions been so inflamed on both sides…or both sides so intractable that they have stopped listening to one another. Regardless of who wins elections, this is a dangerous situation for the future of our country as we sink further and further into an abyss that can only lead to bloodshed.

There are some people who want to change that, and this film – inspired by the non-fiction book by Mark Gerzon, who appears onscreen from time to time to give an overview of the situation – looks at a few of them. We meet Greg Orman, a third party gubernatorial candidate for Kansas in the 2018 elections who fights the uphill battle of convincing people that they aren’t wasting tgheir votes by voting for him; Steven Olikara puts together a coalition of Millennial politicians from both sides of the aisle. David Leaverton, a former Republican operative who had no problem demonizing the left and doing whatever it took to win races, becomes disenchanted with the results of his work and decides to pack up his family in an RV and go to all fifty states and talk to people of both political sides of the argument. Finally, and most poignantly, there’s Susan Bro, the mother of Heather Heyer who was killed protesting the Unite the Right rally in Charlottesville in 2016, taking up her daughter’s mantle for racial equality and justice.

There are some heavy emotional moments here, including Erin Leaverton embracing an African-American woman whose skin color contributed to medical professionals disbelieving her situation which led to tragedy, and Susan Bro admitting to David Leaverton that she didn’t want to meet with him at first because she felt that people like him contributed to the rage that led to her daughter’s murder.

An issue I have is somewhat endemic to the movie in general; it has to walk a tight line to begin with as not to become a partisan diatribe itself, so often it leaves  details out about specific policies and beliefs. I understand the tendency, but it seems to me that if we can’t even talk about issues for fear of offending or enraging one side or the other, we’ve already lost the war.

Still, this is a movie that provides something that’s in short supply these days; hope that things can get better. It will take a shift in attitude and perhaps a degree of maturity that our nation has yet to demonstrate in the actions of its cirizens of late, but that doesn’t mean things can’t change. “I don’t know if the reconciliation you’re talking about is even possible,” one interviewee admits on-camera. All I know is that it is completely impossible if we don’t make the attempt.

REASONS TO SEE: Very emotional throughout. A hopeful sign that there are some people working to bridge the gap between the left and the right.
REASONS TO AVOID: Frustratingly thin on concrete etails.
FAMILY VALUES: There is some violence and adult themes.
TRIVIAL PURSUIT: CNN commentator Van Jones and The View host  Meghan McCain are among the producers of the film.
BEYOND THE THEATERS: Amazon, AppleTV, DirecTV, Fandango Now, Google Play, Microsoft, Vudu, YouTube
CRITICAL MASS: As of 3/5/21: Rotten Tomatoes: No score yet. Metacritic: No score yet
COMPARISON SHOPPING: Burden
FINAL RATING: 6.5/10
NEXT: The War and Peace of Tim O’Brien