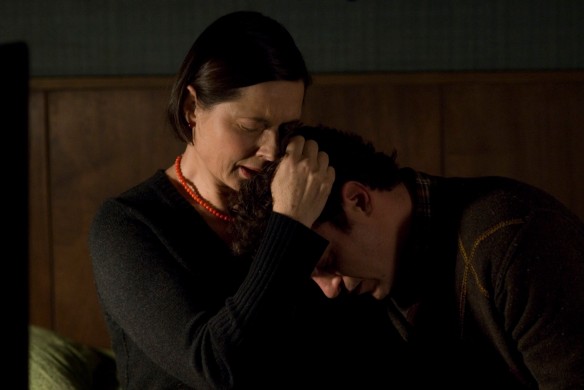 It is difficult to really find the path that’s right for you in life. Early on, your parents may choose one for you and maybe it’s a good path, but right for them, not for you. And if you have a damaged soul, it can be particularly difficult to find any path at all.

Leonard Kraditor (Phoenix) is coming off of one of those romantic break-ups that sucks your soul right out of your body and sends it spinning into the ether. He is somewhat damaged goods to begin with, having issues with bipolar disorder (which to the film’s credit is treated matter-of-factly instead of as a dramatic device) and the break-up shakes him up badly.

He winds up moving back in with his parents in Brighton Beach. He also starts working for his dad (Moshonov) in the dry cleaning business delivering garments to his customers. His mom (Rossellini) wants him to marry a nice Jewish girl (instead of the shikseh who broke his heart) and sets him up with Sandra Cohen (Shaw), the daughter of another dry cleaner. Matchmaker, matchmaker make me a match…

Sandra and Leonard seem to hit it off, but that’s before he meets Michelle (Paltrow), a neighbor who makes Leonard’s problems look positively non-existent.  She is volatile, capricious and prone to grand dramatic gestures and to top things off she’s seeing a married man (Koteas) with problems of his own. On the surface, they would seem to be bad news for one another – which is why they are so attracted to each other, of course.

Of course, Leonard’s mom is mortified; this can only end in disaster and emergency rooms and suicide attempts. Surprisingly, Sandra isn’t about to give up an essentially good man like Leonard without a fight – and Leonard isn’t willing to give up Michelle without one either. How can any man find happiness with two lovers?

The point is, they can’t. At some point you have to commit and that’s what Leonard, whose broken heart has yet to fully heal, has trouble with. It’s in many ways a very powerful look at a situation that we could potentially find ourselves in, particularly in a time where love can become as lethal as an Arizona whacko. Okay, maybe not that lethal.

This is a movie for smart people to a very large degree; there are few of the clichés that dumb down Hollywood romances so often these days and there seems to be at least an attempt to add some realism to the relationships between admittedly damaged people. While yes there’s an element of New York hip to the movie (which can be a deal killer for Big Apple haters), the filmmakers concentrate on the broken shards of Leonard and Michelle’s lives and how they are trying to reassemble something into a whole. There is no pat ending and no Romance 101 storyline. The relationships have ups and downs and Leonard winds up facing a real dilemma; both of these girls are “right” for him only in different ways, and each comes with her own drawbacks. Choosing one over the other is no easy matter and no matter how he chooses, someone’s going to get their heart broken, possibly Leonard himself as well.

The performances are suitably muted and layered with depths of pain and humanity which are gradually peeled away. This is particularly true of Phoenix and Paltrow; Shaw really doesn’t have as much to work with but she does a solid job as perhaps the only person here I’d want to spend more than an afternoon with.

The movie unfortunately garnered more press for Phoenix’ antics while promoting it; it is while doing press for this movie that he made his now-notorious announcement that he was retiring from acting to take up a hip-hop career which turned out to be an elaborate – and somewhat baffling – hoax, as well as his legendary appearance on the Letterman show that resulted in David Letterman’s now famous line “Thanks for joining us Joaquin. It’s too bad you couldn’t be here tonight.” To a degree, Phoenix wound up overshadowing the movie in terms of hype which I think wound up ultimately doing the film a disservice.

WHY RENT THIS: A well-acted, intelligent slice of life-type look at a young man who is kind of drifting through life and facing a tough decision.

WHY RENT SOMETHING ELSE: The somewhat adrift central characters can be maddening. Those who don’t like New York-centric films might find reason to loathe this.

FAMILY VALUES: It has its fair share of vulgar language, a bit of sexuality (some of it fairly raw) and a little smidgeon of drug use.

BOX OFFICE PERFORMANCE: $16.3M on an unreported production budget; the film in all likelihood came close to breaking even or might have even made a little bit of cash.