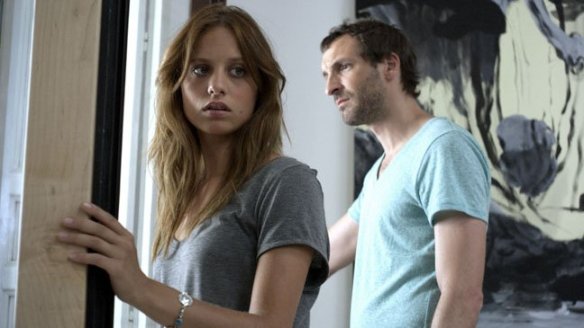 Beauty and the geek.

You wake up after a night of partying and drinking. You’re in a strange bedroom. You don’t remember very much from the night before. The electricity is off. Giant spacecraft are hovering over the city. Don’t you hate when that happens?

Julio (Villagran) is in exactly this predicament. He finds himself in the apartment of Julia (Jenner), a woman so blindingly beautiful that he knows he has no right to score with this kind of woman. Neither of them can remember sealing the deal however, although there is evidence that they did – clothing scattered all over the room, that sort of thing.

While they’re trying to get their heads around the situation, with the city deserted and apparently evacuated while they slept off their epic bender, there’s a knock on the door; it’s Angel (Areces), a nosy neighbor who as it turns out has a crush on Julia. Further complicating things is the arrival of Carlos (Cimas) who is Julia’s ex – but maybe not so ex as she is leading the other two men to believe. He’s a survivalist and has plans on how to ride this situation out.

However, even Carlos didn’t come up with the scenario that all three men, incredibly jealous of the other two, would try to one-up each other to impress the girl, getting them pushed out of the apartment on the premise that maybe they are aliens in disguise. No doubt Julia will be taking eye-rolling to a new art form.

This is Vigalondo’s follow-up to the excellent Timecrimes which was his first feature. Like in that film, Vigalondo  takes genre tropes and turns them on their ear somewhat. In this film, we never see the aliens or learn why they are here. The action instead focuses on the three men trying to win the one woman. The alien invasion is more background noise than raison d’être.

Jenner is a nice find, remarkably beautiful and able to play both shallow and smart. She’s not mere eye candy here although the other men treat her character that way somewhat and her character is not above manipulating the other men. Villagran makes a fine non-heroic sort, a good guy who is in over his head.

There aren’t a lot of effects other than the magnificent alien ships which hover soundlessly in the Spanish sky. Vigalondo keeps the pace moving quickly and has a deft touch with the comedic aspects; for example, one of the men, locked out of the apartment, throws tennis balls in frustration at the open window which is a lot funnier than it sounds.

Keep in mind that the movie isn’t about the alien invasion so much, although there is kind of a Twilight Zone feel to the movie – or to be more accurate, an Outer Limits feel. It’s not about survival of the fittest. It’s a bit of a comedy, a bit sci-fi, a bit romance and a bit farce. Mostly, the movie is about what lengths men will go to in order to win a beautiful woman, and everyone knows the answer to that one – whatever it takes.