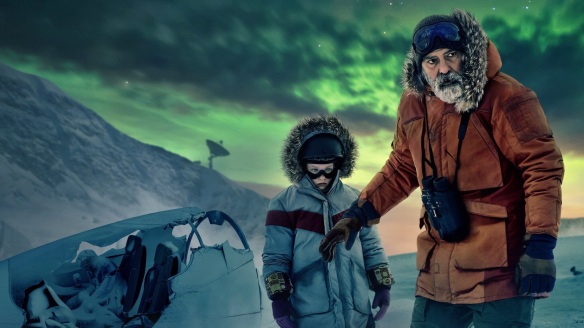 George Clooney confirms that Santa Clause has left the pole.

Hope is a double-edged sword. Sometimes it’s all that keeps us going in the face of terrible odds; but as it can motivate us to greater things, it can destroy us when it is crushed inside us.

Augustine (Clooney) is an astronomer who is the last remaining researcher at a polar observatory. The rest of the crew were evacuated back home, where an unspecified disaster overtook them and the rest of the human race. Augustine himself didn’t leave because he essentially has nowhere else to go, and besides, he has a serious illness which he is self-treating with periodic transfusions which he administers himself.

He makes a couple of discoveries; one, a NASA spaceship – the Aether – is returning from an exploratory mission to Jupiter’s moons to see if a newly discovered Jovian moon is potentially habitable by humans. Thee good news is that the answer is YES) but the bad news is that they have no idea what has happened back home and should they attempt to land, the crew will all fall victim to the same thing that decimated the population of their home.

The other thing Augustine discovers is that a little girl, whom he names Iris (Springall) – after a drawing of the selfsame flower that she gives him – has apparently been left behind after the evacuation. She seems to be mute, but perhaps that’s just as well. Augustine knows that she is now his responsibility, as he can’t very well send her into the death zone and there’s nobody else there. However, he has to warn off the Aether and in order to do that, he has to get a bigger antenna (oh, save your jokes people – this is a family site) and in order to do that, he has to hike to a different site through a winter storm. Meanwhile, the Aether has problems of its own; the Commander’s (Oyelowo) girlfriend (Jones) is pregnant, and they are about to head through an uncharted meteor debris field with their communications array and radar equipment in need of repair which will require a dangerous spacewalk.

Clooney, who up to now has steered clear of effects-heavy films, actually proves to have a pretty good eye for them. The asteroid sequence is pretty thrilling and while the Aether has been accurately described elsewhere as a “baroque Christmas ornament filmed by Stanley Kubrick” (thanks, Variety) the space sequences are fairly realistic.

One of the problems with the film is that there are some holes in logic; for example, we have developed the technology to send a manned mission to Jupiter and equip it with an impressive VR technology, but back on good ol’ earth the technology doesn’t look much evolved beyond what we already have. Does. Not. Compute.

Still, Clooney tackles a role that he doesn’t often take on and he does a great job with it, particularly in the pathos-filled climax. There are three ongoing stories being told here; what’s going on with Augustine, what’s going on aboard the Aether and flashbacks to the past. Clooney as a director has the skill to weave them all together and tie everything up in a neat little bow by movie’s end.

The problem is that there aren’t any really fresh ideas here in terms of the story. It feels like the movie was assembled Frankenstein-style from the parts of a lot of other movies – some better than this one, some not so much. The movie lacks something fresh to it that sci-fi fans tend to crave, although an interesting watch party game could be concocted with a bingo card made up of different sci-fi movies that one checks off when something from that movie shows up onscreen in this one. Make sure you have Gravity, 2001: A Space Odyssey and Interstellar all on your game card if you decide to play.

Although this was always meant to be a Netflix film, this might well have been a Holiday tentpole in gentler times. It’s a shame some of the effects won’t have the advantage of being shown on a theater screen, maybe even a premium IMAX or equivalent screen (worth the admission alone for the asteroid sequence). For home entertainment purposes, it is a bit slow-moving and has some Deep Ideas to its credit, but still makes for interesting viewing if you’re of a mind to Netflix and chill and you are into some cerebral science fiction.

REASONS TO SEE: Clooney gives a strong performance. The special effects are pretty good.
REASONS TO AVOID: Feels cobbled together from a lot of other sci-fi films.
FAMILY VALUES: There is some profanity and a few bloody images.
TRIVIAL PURSUIT: The movie that Augustine is watching is On the Beach, which stars Gregory Peck whose grandson Ethan plays a younger Augustine.
BEYOND THE THEATERS: Netflix
CRITICAL MASS: As of 1/17/21: Rotten Tomatoes: 52% positive reviews. Metacritic: 58/100.
COMPARISON SHOPPING: IO
FINAL RATING: 7/10
NEXT: Some Kind of Heaven