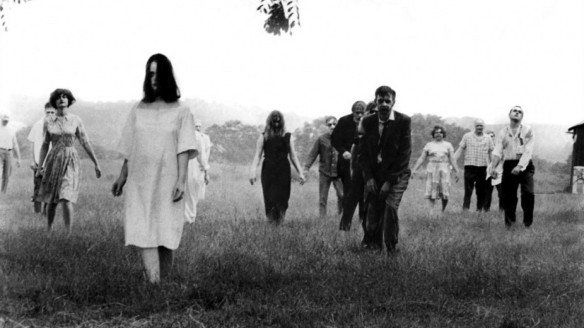 They’re coming to get you, Barbara!

Less is often more, particularly when it comes to excellent filmmaking. In fact, in the world of independent films, less is often all you get. For some classic films, that turns out to be serendipity of the most wonderful kind.

Barbara (O’Dea) and her brother Johnny (Streiner) are at the cemetery one somewhat chilly spring day to visit their father’s grave on the anniversary of his death. Barbara is a bit discomfited and Johnny teases her that “they’re coming to get you Barbara” in a not-bad Boris Karloff impression. Then indeed, they are coming to get her as a reanimated corpse (Hinzman) attacks her. Johnny saves her but accidentally falls during the struggle, hits his head on a gravestone and is instantly killed.

Panicking, Barbara runs to an old farm house with a gas pump outside it. She is followed by dozens of the ghouls (the word “zombies” is never uttered during the film) and runs inside, only to find a woman’s mangled corpse. Once again panicking, she runs outside only to be stopped by Ben (Jones) who pulls up in his car which is running out of gas. He ushers her back inside and fights the walking dead off, barricading the doors and windows.

In the cellar they find Harry (Hardman) and Helen (Eastman) Cooper and their daughter Karen (Schon). They are hiding there after their car was overturned by a horde of the undead. Karen is gravely ill, having been bitten on the arm by one of them. Also in the cellar is teenage couple Tom (Wayne) and Judy (Ridley) who sought shelter after hearing an Emergency Broadcast urging people to get inside.

Immediately a struggle for power ensues between Ben and Harry. Harry wants everyone in the cellar but Ben knows it’s a deathtrap – there’s only one way in or out and once down there, they are committed to a last stand. The group hears reports of an infestation of the dead rising throughout the eastern half of the United States. Shelters have been set up throughout the state of Pennsylvania in the greater Pittsburgh area. Tom and Ben know their only chance is to get to one but Ben’s truck doesn’t have enough gas to make it. Meanwhile the dead outside have grown into a horde surrounding the farmhouse.

This is as DIY a movie as you are ever likely to find. Romero, who had begun his career shooting commercials and local TV programs including several vignettes for the popular children’s show Mr. Rogers Neighborhood knew little about making a feature film but went at it with the gusto of youth. Enlisting local actors and friends to play zombies, the movie has an unparalleled creep factor and was unlike any horror movie seen before and in some ways, since.

This was one of the first movies to show zombies eating people. The distinctive shuffling gait of the walking dead was first seen here. Many of the conventions of modern zombie movies were established by this one. While it is fairly tame by modern standards in terms of gore, in its time it was truly shocking.

Another shocking element was having an African-American as the heroic lead. That was rarely done in the movies outside of Sidney Poitier and never in a horror movie. Jones, an erudite scholar who studied at the Sorbonne and acted professionally in New York City, made for a good one – strong and iron-willed. When he slapped a hysterical Barbara across the face, audiences surely must have recoiled in amazement – a black man hitting a white woman? Positively indecent! Ironically enough, the movie was released a week after the assassination of Martin Luther King, to give you a sense of the timeline involved.

Sure, by today’s standards the movie is pretty crude but the storytelling is not. In fact, the movie is even now pretty gripping, particularly if you haven’t seen it before (and if you haven’t, what kind of rock have you been hiding under?) and for those who have, it never fails to keep one on the edge of their seat.

The film famously fell into public domain nearly immediately upon release because the filmmakers naively didn’t know to put the copyright statement at the film’s conclusion, so Romero and his partners saw little profit from the movie which has generated tens and maybe hundreds of millions of dollars in revenue, mainly for other people. A documentary on the film, Year of the Living Dead screened this past April at the Florida Film Festival and gives some insight into the making of the film and its impact on popular culture.

There is really no underestimating the role of this little movie from Pittsburgh has had on horror films and popular culture in general. In many ways, the modern independent film industry sprang from pioneers like Romero. Watching the movie now, we see that it is certainly a product of its times not just technologically speaking but also in terms of the movie itself; whether consciously or not, it examines racial tensions of its time and nuclear fears as well. It’s surprisingly well-written and if there are some areas where the script dates itself, it nonetheless remains a timeless classic. Anyone who loves horror movies needs to see this one and not just once – regular viewings are recommended and I’m not talking about the Rifftrax abomination that showed recently in theaters but the original. This is the ultimate zombie movie and should be treated with the reverence as such.

WHY RENT THIS: A classic that essentially re-defined the zombie film. Startlingly poignant and intelligent.

WHY RENT SOMETHING ELSE: Crude by modern standards.

FAMILY VALUES:  Violence, disturbing images, adult themes and some brief nudity. Even 45 years on this is still not for the kiddies.

TRIVIAL PURSUIT: As was common with black and white films, Bosco chocolate syrup was used as blood.

NOTABLE HOME VIDEO EXTRAS: Because the movie fell into the public domain, there are myriad home video versions out there, mostly made from inferior prints and with few or no extras so for our purposes we’ll concentrate on the higher end home video releases. The 1999 Special Collector’s Edition has a comedic short Night of the Living Bread as well as examples of Romero’s early commercial and TV work for Image Ten. The 2002 Millennium Edition however remains to date the standard – in addition to what was mentioned, there are liner notes from Stephen King, clips from lost Romero films The Derlick and There’s Always Vanilla, the original treatment and script for the film, an audio interview with the late Duane Jones and scrapbook photos from cast and crew members. To my knowledge, no credible Blu-Ray version exists of the film to date but hopefully as we approach the 50th anniversary of the film someone will make an effort to do it justice.