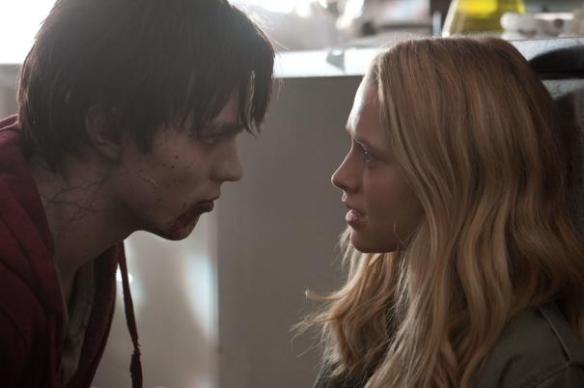 Love is not only blind, it doesn’t have much of a sense of smell either.

Zombies are in these days with the success of The Walking Dead television show (one of the best things on television right now) and movies like Shaun of the Dead and 28 Days Later. For the most part we see those imperiled by the zombie apocalypse. But what are the zombies thinking?

A young man wanders around the airport, listlessly. He doesn’t work there; he’s been dead for some time but has been reanimated by forces unknown. He has some memory but can’t remember his name, other than that it starts with R. So R (Hoult) it is. His best friend (if you can call it that) is another shuffling undead flesh-eater whose name might have begun with M (Corddry).

R’s life kind of sucks but then it kind of doesn’t. He collects things and puts them in the jumbo jet he’s converted into his home, a kind of zombie man-cave. He listens to old LPs on a turntable (where’s the power coming from for it?) and stares at little knick-knacks he picks up around the airport. Occasionally, he goes hunting for food with M.

There are zombies and then there are Bonies who are kind of like hardcore zombies who have given up. One day they just start tearing their own flesh off. They’re superstrong, super-aggressive and super-grouchy. There are a few humans left who live in a walled-off section of town. They are led by the military-stiff Grigio (Malkovich) whose daughter Julia (Palmer) and her boyfriend Perry (Franco) are leading a party of scavengers to get medical supplies for the survivors.

That’s where R’s hunting party finds them. The attack is brutal and the outcome inevitable. Perry is a big talker but not a great shot – and as you know from your zombie 101 that zombies can’t be killed with anything other than a head shot. Perry’s shot hits R in the chest which just pisses R off and he chooses Perry to be his brain snack.

When a zombie eats the brains of a victim, they are able to access the memories of that victim. R sees Perry’s memories of Julia and decides to save her, managing to smuggle her out and to the relative safety of his airplane. After an aborted escape attempt convinces her that it is terribly unsafe to go out of the plane, she agrees to stay with this most unusual zombie.

The presence of Julia is changing R rapidly. His vocabulary improves. He begins to have tender feelings towards Julia (although are they his own or a product of Perry’s memory? an intriguing question the movie doesn’t bother to pose) and there are physiological changes as well. What’s more, M and the other zombies are beginning to change as well.

The Bonies don’t like that one little bit and want to find R and stop this “cure” before it gets too far. Julia needs to get back home but her father and his fanatical soldiers would shoot R on sight (and it’s for damn sure that they’re better shots than Perry). What’s more Julia has developed some powerful feelings for R as well. Is this love as doomed as that of Romeo and Juliet?

It’s no secret that the story here is loosely based on the Shakespeare play with several characters referencing characters from the play (R=Romeo, Julia=Juliet, M=Mercutio, Perry=Paris etc.). That no doubt suits the audience that this is intended for just fine – the preteen/teen girls who adore Twilight and their moms. In fact, I think it’s safe to say that most of the target audience is only aware somewhat of the R&J connection and have had little contact with the original play itself if any.

One of the things that works really well here is the chemistry between Hoult and Palmer. Hoult, who as a young man has become a seasoned veteran of the movies (some of you might remember him as young Marcus in About a Boy), is rapidly turning into a star. This might be the film that propels him to the next level. Palmer, whose done several genre films targeted towards young adults (I Am Number Four and The Sorcerer’s Apprentice among them), plays a plucky independent sort that the young teen girls seem to flock to these days. She and Hoult make an attractive couple (even if one of the is rotting away).

There are some pretty funny moments, particularly with R’s inner monologue. There is also a nice sweetness here that while not going to get you running out to the nearest zombie apocalypse to find yourself a boyfriend, it will at least touch the teddy bear softness of your heart. The only real complaints I have about the movie are the CGI Bonies which are unconvincing (which is a rather charitable assessment) and several plot points that kind of get little play, like Julia’s reaction to the news that R ate her ex. Not something most girls are going to get past very quickly I would think.

Still, this isn’t a bad movie at all. In fact, it’s a pretty good one – much better than I thought it would be, wondering if the filmmakers would be pandering to that target audience (they do but they don’t – Levine and cohorts seem to be of the opinion that teen and preteen girls appreciate a good movie more than a mediocre one). It’s actually a movie that I wish more Twihards had gone to see – I think those pining away over the absence of Bella, Edward and Jacob might find this right up their alley.

REASONS TO GO: Endearing and funny when it needs to be. Nice chemistry with Hoult and Palmer.

REASONS TO STAY: CGI Bonies are weak. Glossed over some important plot points.

FAMILY VALUES:  As there are zombies, there are extensive scenes of zombies eating people as well as getting shot in the head, although the gore is relatively mild (think The Walking Dead). There’s a lot more bad language though.

TRIVIAL PURSUIT: The Nora character was part-Ethiopian with brown skin in the book but was changed to a Caucasian for the movie.