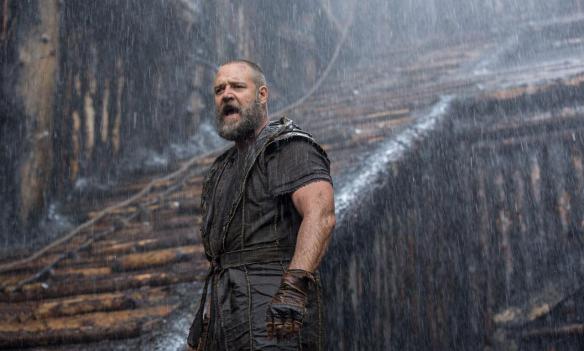 Russell Crowe is about to get Biblical on yo ass.

Most everyone in the Western world – and a good part of the Eastern – are familiar with the story of Noah and the Great Flood. How God, in his wrath, wiped out all life on Earth – except for Noah, his family and all the innocent creatures of the Earth…well, two of each species of them, anyway.

The story of Noah actually takes up only four chapters in Genesis however and is lacking in any sort of detail except for those important to the writers of the Bible and/or those they were writing it for. You have to wonder what the real story was.

Darren Aronofsky did. Intrigued by the tale of Noah since the age of 14, he set out to film his own interpretation of the events that led up to the flood and what happened during and after it. He and co-screenwriter Ari Handel did extensive Biblical research and while they did interpret some of it fairly loosely, this is what they came up with.

Noah (Crowe), a descendant of Adam’s son Seth and grandson of Methuselah (Hopkins) lives with his wife Naameh (Connelly) and his sons from oldest to youngest Shem (Booth), Ham (Lerman) and Japheth (Carroll) in the wastelands. They take from the Earth only that which they can use, eat the flesh of no animals and stay away from the civilizations of the time which are the works of the descendants of Cain. Noah had watched his own father (Csokas) slain for no real reason by some of those descendants.

Noah receives visions from the Creator – never referred to at any time as God in the film – that He is displeased with the wickedness of the world and intends to wipe everything out and start over. He will use a great flood to accomplish this. Troubled by his vision, Noah decides to visit his grandfather to see what this all means which makes sense since as part of the vision he saw the mountain his grandfather lives a hermit-like existence on. Along the way they pick up Ila (Watson) whose family was butchered by Cain’s descendants and whose own horrible injuries have left her unable to bear children.

Methuselah gives Noah a tea to drink which brings on another vision – this time of a great ark that must be built to survive the storm. Methuselah gives Noah a seed – the last seed from the Garden of Eden. This creates a forest and convinces the stone Guardians – fallen angels whose light has been sheathed in mud – to help Noah and his family to build the massive structure.

Years pass and word passes to Tubal-cain (Winstone) the King of the local city who recognizes that Noah is serious. He means to possess the Ark for his own and start a new world in his own image while Noah is just as sure that men are a plague upon the Earth that need to be eradicated. Neither outcome sounds particularly palatable to Naameh and her children.

There has been plenty of controversy surrounding the film even before it came out. Evangelical Christians were damning the film based on remarks made by Aronofsky who is an atheist and said in an interview that it is the least Biblical epic made about a Bible story and characterized Noah as the first environmentalist. Of course, that’s the kind of thing that is sure to make an extreme right-wing Christian get their panties in a bunch.

However, in many ways I can’t blame them. They take a good deal of liberty with the story – six-armed fallen angels made of rock, Tubal-cain who barely appears in the Bible and then as essentially a blacksmith being elevated to King and nemesis. The core elements are all there though and the scenes of the flood are spectacular.

Sadly, not all the CGI lives up to that. There isn’t a single animal in this film that is alive – every animal is CGI and many of them are beasts that are no longer around or never were around. They don’t walk like animals do and there are so many that they all kind of run together. I know the story inherently calls for spectacle but the grand scale is too much; we need something as an audience to latch onto.

Fortunately there is Crowe who makes a mighty badass Noah. Noah is a bit pigheaded during a certain stretch of the movie and you can see in him the tenacity that would make a project like the Ark even possible. There is also a tender side to Noah that allows him to sing a gentle lullaby to an injured and frightened little girl. Noah is portrayed in the Bible as someone who follows God’s directives unquestioningly and we get the sense of that here.

Unfortunately, there is also Connelly who is a terrific actress but has one of the least satisfying performances of her career. She has one scene where she has a confrontation with her husband over his increasingly vile point of view, particularly when they receive some startling news involving Shem and Ila. The normally reliable Connelly is shrill and overacts within an inch of her life. I was kind of saddened by it. Watson, likewise, is misused and her character – who is apparently made up for the purpose of testing Noah since she doesn’t appear in the Bible – never really syncs up.

There is a message for our modern day squandering of our resources and our inhumanity to one another. Once again there has been some grousing from the right over these leftist messages, but I have to say that the Biblical parables were meant to be timeless and relatable to all people no matter the era. If Aronofsky is attempting that here, I would think that he’s in line with the intention of these stories if not their execution.

At the end of the day the clumsy CGI and occasional bouts of overacting make this two and a half hour film squirm-inducing particularly near the end. There are some beautiful moments – a dove appearing with an olive branch in its beak signifying that land exists and their ordeal is nearly over, or the rainbow at the film’s conclusion that signifies God’s covenant to never use the waters to destroy all life ever again. I wish I could recommend this more because of them, but the flaws overwhelm the strengths of the film too much that even a miracle couldn’t save it.

REASONS TO GO: Crowe is strong. Draws modern parallels on the story.

REASONS TO STAY: Overreliance on spectacle. Some of the CGI is woeful. Misuse of Connelly and Watson.

FAMILY VALUES:  There is some violence and some scenes may be too intense for the sensitive.

TRIVIAL PURSUIT: The film was banned in Qatar, Bahrain and the UAE prior to release because it would contradict the teachings of Islam, which forbids the depiction of prophets cinematically. Islam considers Noah to be one of the prophets.

NEXT: The Florida Film Festival Begins!