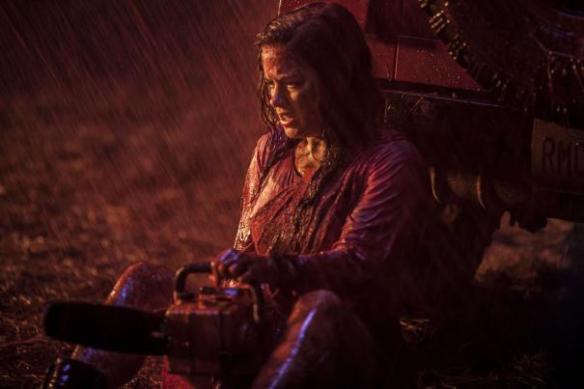 One of the best horror films of the 1980s and a personal favorite of mine was 1981’s Evil Dead which starred Bruce Campbell and was directed by a young Sam Raimi. Now it’s getting the remake treatment (although Raimi and Campbell are on board as producers); is it worth the effort?

Five friends gather in a remote cabin which belongs to David (Fernandez) and Mia (Levy). David’s girlfriend Natalie (Blackmore), best friend Eric (Pucci) and his girlfriend, RN Olivia (Lucas) are there not for drunken revelry but for a more sober reason – to get drug-addicted Mia straight. She’s going to quit cold turkey and David, who’s been absent from her life (hell, he’s been absent from everybody’s life) is getting the cold shoulder from Eric and Mia and to a larger extent, he deserves it.

Mia soon begins ranting about seeing a strange young girl in the woods, and complains about a terrible smell. When they discover a hidden door that goes into the basement, they are shocked to find all sorts of dead cats hanging from the ceiling, some burned alive. They also find a book, wrapped in barbed wire and all but screaming “DO NOT READ. YOU’LL BE SORRY…”

What does Eric, the supposedly smart one do? Reads it aloud. Are you effin kidding me? And of course all Hell literally breaks loose – Mia goes for a walk in the woods and gets attacked and restrained by the trees, at which point the young girl vomits up a kind of cross between a vine and a snake and that….well, you can guess where it goes. Maybe not.

After which the young people get picked off one by one, becoming possessed, desperately trying to hack off their infected limb before the entity takes over and then…being taken over anyway. It’s grueling, gory and only 90 minutes long, by which time either you will care what happens to the survivors (assuming there are any) or you won’t. It all kind of depends on how you view horror movies in general.

This one isn’t all that bad despite the fact that it suffers from Young People Doing Incredibly Stupid Things syndrome. Of course it’s easy to judge the reactions of people from the safety of a movie theater with a mouthful of popcorn being chewed noisily, ice cold soft drink at the ready to wash it down with. I assume that in a situation in which my perception of reality was challenged I might actually…panic. I might not even act heroically which of course throughout the movie I’m thinking “David you idiot! If it were my sister, I’d shoot her in the head in a heartbeat.” The trouble is, I don’t think I could shoot my sister in the head, even if I knew she were literally suffering the tortures of the damned. I’m not sure if that makes me a coward – in the context of horror movies, however, it makes me a wimp of the highest order of magnitude.

The performances are solid enough for movies of this type with Suburgatory‘s Levy getting the most props for her portrayal of a troubled, addicted young woman. There is plenty of gore, nearly all of it practical which for my money looks a lot better to this point than the computer generated stuff. There are some pretty decent scares as well, although more of the roller coaster variety than the slow build-up and payoff type.

There are a couple of things missing here. First and foremost is the sly humor that marked the original – this is much more serious horror, no sly winks or edgy gags. And no Bruce Campbell who was responsible for a lot of the not-taken-seriousness of the first trilogy. That sense of humor is what made the original trilogy a classic; by comparison the remake is a bit stodgy.

That doesn’t mean it isn’t without its own charms however. While it doesn’t really hold up to the original, it does what it’s supposed to do competently and as modern horror films go, it holds up its end of the bargain adequately.

REASONS TO GO: Some pretty impressive visuals and scares. Maybe the ultimate “lonely cabin in the woods” story.

REASONS TO STAY: Needs a Bruce Campbell sort to make it work. In the end nothing really distinguishes it.

FAMILY VALUES:  There is a ton of blood, guts and ultra-violence, plenty of bad language and some sexual references.

TRIVIAL PURSUIT: Swanberg directed six films that were filmed in 2010 (and co-directed a seventh), one of the busiest years for a single director since the silent era.

COMPARISON SHOPPING: Cabin in the Woods

NEXT: Big Star: Nothing Can Hurt Me 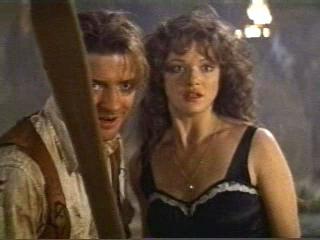 Brendan Fraser and Rachel Weisz in a sticky situation.

Note to Hollywood filmmakers: now this is how to do monster movies in the 21st century. Something old (the setting), something new (the effects), something borrowed (the premise), something blue (a couple of racy outfits). Even 13 years later this still remains a standard.

Rick O’Connell (Fraser) is an adventurer in the tradition of Indiana Jones. He’s smart, strong, a crack shot and as it happens, one of two survivors of an ill-fated expedition to Hamunaptra, the legendary (some would say mythical) Egyptian city of the dead. It’s reputed to be the resting place of the treasure of the Egyptian pharaohs.

It’s also the resting place of Im-Ho-Tep, the high priest of the dead and murderer of Pharaoh Seti II. Even back then they frowned on regicide a little; ol’ Im-Ho-Tep got the nastiest Egyptian punishment there is which is to be slowly devoured by flesh-eating scarab beetles after being entombed while still alive. That definitely leaves a mark (those Egyptians could be pretty nasty when they wanted to be).

Cut to the 1920’s. After Evy Carnahan (Weisz), a sweet-natured librarian discovers a map to the legendary lost city, she enlists O’Connell, Jonathan (Hannah) her ne’er-do-well brother and a corrupt Warden (Djalili) – read designated victim – to help find the site, where the Book of Amon Ra, which contains the secrets of Egyptian magic, is also said to reside.

What they do find when they finally get there is the Book of the Dead. This awakens Im-Ho-Tep, who is mighty steamed – as you would be if you had been buried alive with flesh-eating beetles. He brings with him the ten plagues of Egypt (the ones in Exodus – check out The Ten Commandments if you aren’t up on them) and the ability to control the elements.

He wants to re-animate his dead lover (after 2,000 years, a fella’s got needs) and kidnaps the librarian to do so. From here on in, it’s a roller-coaster ride of dazzling special effects, spine-tingling thrills and daring escapes.

This is one of the best movies — in terms of sheer entertainment — that’s come down the pike since, say, Aliens or at maybe even the aforementioned Raiders of the Lost Ark. It moves at breakneck speed and visually is superb eye candy. Director Stephen Sommers took a fairly hackneyed monster movie and turned it into a franchise for Universal, which sorely needed one.

And Brendan Fraser as an action hero? Who’da thunk it, but it works. Fraser is very likable, in the tradition of Jimmy Stewart. Weisz, then at the beginning of a career that has brought her an Oscar to this point, did a good job as the plucky heroine and Hannah set the bar for the comic relief. Fehr, playing a kind of Guardian of Hamunaptra, shows some Arabic hotness for the ladies and makes a credible action hero in his own right but you’re not watching the movie for the acting. It’s all about More and Bigger and Louder, and The Mummy delivers.

While some of the scenes are a bit too intense for younger children in general, this is one fine family entertainment that you’ll want to add to your video library. particularly if you have teenagers in the house.

WHY RENT THIS: Fun and entertaining. Re-invents the classic movie monster film. Great CGI effects for their time. Weisz and Fraser make an attractive heroic couple.

WHY RENT SOMETHING ELSE: Some of the scenes are a bit grisly and may be too scary for smaller kids.

FAMILY MATTERS: Plenty of violence and a bit of nudity as well.

TRIVIAL PURSUITS: Ardith Bay, the character Fehr plays, is an anagram of Death By Ra. It is also the name of the character played by Boris Karloff in the original 1932 version.

NOTABLE HOME VIDEO FEATURES: In the original DVD release there was a  text Egyptology feature that is actually quite informative. The 2001 Ultimate Edition includes a timeline of the reiging Pharaohs of Egypt. The 2008 Deluxe Edition included a storyboard to film feature. All of these are available on the DVD version as well.

BOX OFFICE PERFORMANCE: $415.9M on an $80M production budget; the movie was a blockbuster, spawning two sequels and a spin-off franchise.