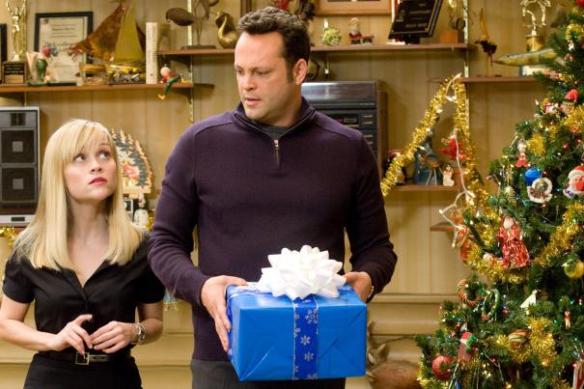 Christmas is an incredibly stressful time of year for families that are even in the best of circumstances. When you take two sets of divorced parents, and a couple that are resisting the urge to get married because of it, you can get some interesting situations.

Brad (Vaughn) and Kate (Witherspoon) have what seems to be a really good relationship. They’re both successful people, well-organized and care deeply about each other. They do have a quirk however; they don’t like spending Christmas with their families. They make up elaborate lies every year to avoid spending any time with their four sets of families (both Brad and Kate are the products of divorced parents, several of whom have since remarried). They then take a well-deserved vacation in some tropical paradise – in this case, Fiji.

However, this is the year when most of their plans are going to go awry. Fog at San Francisco’s airport kills their flight; when they are put on television to comment on the situation, the jig is up. There’s nothing for it but to spend some time with each of their four parents.

First up is Brad’s dad, the irascible Howard (Duvall) who would live in a double wide if he was just a little bit less well-heeled. His other sons Denver (Favreau) and Dallas (McGraw), each of them named for the city they were conceived in (Brad’s birth name is Orlando), are a little bit shall we say steroid-enhanced. Would-be wrestlers, they take every opportunity to beat the crap out of Brad in a semi-playful manner that doesn’t hide so well their underlying rage. Dallas’ wife Susan (Mixon) is the queen of seven-layer cuisine. An attempt to hook up satellite TV for Howard ends in complete disaster.

Next up is Kate’s mom (Steenburgen), a man-hungry cougar who has set her sights on Pastor Phil (Yoakam). She is surrounded by fellow cougars and children with kids, her sister Courtney (Chenoweth) in particular with a baby that is a living, breathing, projectile vomiting machine. Kate and Brad are recruited to star in the church Christmas pageant as Mary and Joseph, which affords Brad an opportunity to access his inner Vince Vaughn.

Brad’s mom (Spacek) is next on the list, and Brad has a real problem with her. You see, she’s married Brad’s childhood friend (van Horn). Can we say awkward? I knew we could. All along Kate and Brad are finding out more about each other than they’ve ever known – when one reinvents oneself, one sometimes leaves past indiscretions behind one.

Finally, we end up with Kate’s Dad (Voight) where things come to a head. Kate and Brad will have to decide if they are really ready to step up and make it official or else let the things between them remain between them.

I get the distinct impression that the filmmakers were tasked with making an outrageous comedy with a holiday theme, and then studio execs kept asking them to tone it down. The movie is replete with screenwriting 101 clichés, characters who are artificially outrageous for no other reason than to provide something for Vaughn and Witherspoon to work off of.

Actually, what I really mean here is Vaughn. While he pretty much sticks to his regular shtick, his comedic persona is so well-developed that he can do it in his sleep. Much of the movie is improvised which is right up Vaughn’s alley and when Vaughn is riffing, there are very few who can keep up with them. Witherspoon is a capable comic actress, but she’s dealing with a force of nature and wisely keeps herself to the background.

The parents are all Oscar winners and you would think with this kind of cast that there would be some depth to the movie. Nope, that’s a big negatory. This is really meant to be mindless entertainment and for the most part, the impressive cast just show up, collect their paychecks and move on to bigger and better things. Only Voight has a really magic moment, a one-on-one conversation with Witherspoon that injects some of the badly needed holiday spirit into the movie.

The movie got the equivalent of a thermonuclear blasting from critics upon release back in 2008, which still makes me scratch my head. No, this isn’t the greatest Christmas movie ever but it is mostly inoffensive and pretty mindless entertainment. While the tiny Witherspoon and tall Vaughn present a framing challenge, they have enough chemistry together to make the movie work. If you need something to put you in a holiday frame of mine, you could do worse.

WHY RENT THIS: An astonishing cast, with four Oscar winners (playing each of the parents) as well as two country stars. Vaughn is at the top of his game here, and Witherspoon is always charming.

WHY RENT SOMETHING ELSE: The movie tends to get a bit unfocused in places and the reliance on improvisation gives the movie a choppy feel.

FAMILY VALUES: Some of the humor is on the sexy side, and there is a little bit of foul language but not enough to get steamed up over.

TRIVIAL PURSUIT: Steve Wiebe makes a cameo playing Donkey Kong in the movie. Wiebe was the subject of Gordon’s excellent documentary King of Kong: A Fistful of Quarters.

NOTABLE DVD EXTRAS: While there is nothing on the DVD version (grrrrr!) there is an hysterical gag reel on the Blu-Ray version as well as a well-intentioned but poorly executed comedy cooking show with Mixon and celebrity chef Paula Deen.

BOX OFFICE PERFORMANCE: $163.7M on an $80M production budget; the movie broke even.

TOMORROW: The Holly and The Quill continues.