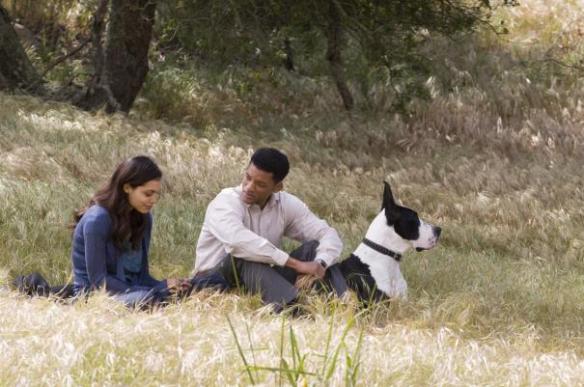 An idyllic picnic with Rosario Dawson, Will Smith and behemoth.

Ben Thomas (Smith) is an IRS agent who, on first glance, isn’t a terribly nice guy. He badgers a blind customer service operator named Ezra (Harrelson) on the phone to the point of cruelty. He is curt, grumpy and often condescending to people. His relationship with his brother (Ealy) has gone into the dumpster, which mystifies the brother; why does Ben want to keep his family at arm’s length that way?

Ben does a lot of things that don’t make a lot of sense. He is investigating the finances of a nursing home operator, and then punches him in order to get an elderly woman her bath. He follows Ezra into a bar, striking up a civil conversation with him. He inserts himself into the lives of people with health and relationship problems, and seems to be falling for one of them, a beautiful woman with a heart that is slowly ticking down to its last beat named Emily Posa (Dawson). His best friend Dan (Pepper) owes him a favor, one that Dan is reluctant to repay but that Ben insists that he does. He apparently owns a beautiful multi-million dollar beach house but has checked into a seedy motel. You find yourself wondering why Ben does the things he does.

To tell you too much about the plot would be to ruin the movie for you. Suffice to say that Ben has plenty of reasons for doing the things he does and that his master plan, hinted at throughout the movie, resolves itself in the final minutes of the film.

For Will Smith, this is one of the finest performances of his career. Reunited with director Muccino, who got another great performance out of Smith in The Pursuit of Happyness, Smith plays a character that is deeply wounded, highly intelligent, highly driven and very compassionate, sometimes all at once. He can snap and snarl in one moment and be pulling weeds and fixing an antique printing press in the next. He has an engineering degree from MIT, but has the charisma to be a motivational speaker. There are a lot of layers to this character and Smith brings them all together in one believable package. Of course, Smith is so likable an actor that he can make his audience relate to him and root for him even when he is being unlikable. Not many can pull that off.

Dawson, his love interest in Men in Black II, returns to fill the same role here and she also does some of her finest work. She plays a woman living with a death sentence, knowing that the odds are long that she’ll be able to survive long enough to get a heart transplant from a donor with the same rare blood type as she has. She manages to remain upbeat most of the time, although she has her moments of despair. She is articulate, creative and beautiful, in nearly every way the perfect woman which makes Ben’s reluctance to let her in all the more puzzling until the final reel.

This is not always an easy movie to watch – there are some scenes in which raw emotions are laid bare, and others in which there are some very disturbing images. Much of this movie is about redemption although not in the way we usually think about it. Again, I’m being deliberately vague not to ruin the power that the movie has.

There are a few plot points that require us to be a little more trusting of the writers than perhaps we should be – some of the plot points wrap up certain elements neatly but defy logic when examined closely. We have to assume that Ben did the research to justify his actions before carrying them out, otherwise some of his attempts to help people may have turned bad in the long run.

Be that as it may, this is a movie that makes you think about how far you would go to make amends for your actions. I have an inkling of the burden Ben Thomas lives with because I was involved with a similar incident to the one that sends Ben on his journey, and in all honesty I had many of the same impulses he did, although not the resources to carry them out. I do, however, understand what guilt can do to a person – and perhaps that’s why I loved this movie as much as I did. It’s outstanding, with a performance by Will Smith that by itself is worth checking the movie out for, but it’s the themes of the movie that kept it in my memory long after the film was over.

WHY RENT THIS: A serious and sober look at how men deal with trauma, responsibility and loss. Smith is fabulous in the role.

WHY RENT SOMETHING ELSE: The last scene is a little treacly, and some of the plot points require a whole lot of suspension of disbelief.

FAMILY VALUES: The content is definitely on the adult side so you may want to watch this with your smaller kids. There are a couple of disturbing scenes and a little bit of sexuality as well.

TRIVIAL PURSUIT: The Travel Inn that Ben Thomas stays in during the movie is the same one used in the movie Memento.

NOTABLE DVD EXTRAS: There are featurettes on box jellyfish and on antique printing presses like the one Ben refurbishes for Emily.