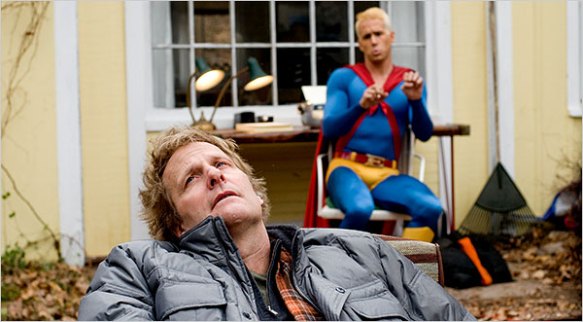 Writing can be a tricky road to navigate. Sometimes, the words are a flood and you can barely get them out on paper (or laptop) fast enough, the torrent is so overwhelming. Other times it’s a trickle and it seems like every word is a struggle.

Richard Dunn (Daniels) knows that better than most. It’s hard to call him a successful novelist – he has at least published something – but not many people have bought it. He’s having trouble getting his second novel out. Fortunately for him, his wife Claire (Kudrow) is a successful vascular surgeon in New York which means he really doesn’t have the pressure of making a living, but that doesn’t help the creative juices to flow in this case. He is getting on and childless and knows that there won’t be any kids. He is the last of his line and wants to leave something behind that people will remember him for.

The thing that he might be remembered for is that he has an invisible friend and has had one since he was a boy. His invisible friend is a superhero named Captain Excellent (Reynolds) who follows him around and urges him to get off of his ass. Claire is fully aware of the Captain’s existence and while she tolerates it – in fact, there is much about her marriage that she can merely tolerate – she doesn’t like it much.

Richard needs a change of venue and Claire frankly needs some time away from her husband – call it a trial separation and Claire might wince but she won’t disagree. She packs him off to their summer cottage in Montauk on Long Island where perhaps, in the off-season when it is less crowded, he might be motivated to put pen to paper or in his case, fingers to typewriter keys.

Richard, while riding to town on a young girl’s bike (the only vehicle he owns) spies Abby (Stone), a young girl somewhat lackadaisically committing arson. Fascinated by her boredom, he hires her to babysit, the fact that he is childless notwithstanding. When Abby finds out about this little deception, rather than run away she merely shrugs and accepts. At least it’s something to do.

The two form a friendship that is somewhere between that and a surrogate father-daughter relationship. Things get a little dicey when Abby mistakes that friendship for lust, or when Abby’s thuggish boyfriend (Parrish) objects – nobody gets to abuse Abby but him – and finally when Claire finds Abby and Richard asleep on the sofa after Richard throws a kegger for her friends. Richard has reached a crossroads; his marriage is in jeopardy, his career as a writer is in the toilet and his friendship with Abby is perhaps not the healthiest thing. Can even Captain Excellent save him from himself?

This is the kind of movie that is full of indie angst. Co-directors (and co-writers) Kieran and Michelle Mulroney (the brother and sister-in-law respectively of actor Dermot Mulroney) have concocted a tale that takes a quirky character, sticks him in a kind of a quirky place (off-season Long Island) and throws a few quirky incidents into the mix.

The result is a bit on the precious side. There are times you want to throttle Richard, he’s simply so without direction and without clue. Daniels can do these kinds of characters very well; in fact, he’s noted for them (check out Dumb and Dumber and The Squid and the Whale for further evidence).

Fortunately, he’s paired with Emma Stone whose career was just starting to take off as this was made (The Help hadn’t been released when this was filmed). This might well wind up being most remembered for affording the opportunity to see a huge star in the process of becoming one. She takes a role that could easily have been overbearing and made her relatable and more than that, sympathetic. While the focus is ostensibly on Richard, I found myself wanting to spend more time with Abby and it isn’t because Stone is stealing the movie; our focus just naturally gravitates to her. That’s the mark of a great actress.

While I’m okay with the Captain Excellent conceit (and the bleach-blonde Reynolds is now as adept at playing superheroes as anyone), it was just one of the many quirks in this movie that has too many of them, from Christopher (Culkin), the suicide-obsessed friend of Abby to the incessant talk of soup, there comes a point where it simply overdoes the indie charm. I personally wish more indie movies would rely more on story and less on eccentricity. I get that quirky people are interesting but in the long run people who are relatable to thee and me are of more lasting value – and keep my attention. There was a better film to be had here but that doesn’t mean that it should be avoided – Stone’s performance alone is certainly compelling enough to be worth the rental.

WHY RENT THIS: Well-acted (particularly by Stone) and clever.

WHY RENT SOMETHING ELSE: Lays on the indie quirkiness on a bit thick.

FAMILY VALUES: Mostly a lot of bad language but there’s a bit of sexuality as well.

BOX OFFICE PERFORMANCE: $13,514 on an unreported production budget; it is extremely unlikely that the movie made any money whatsoever.