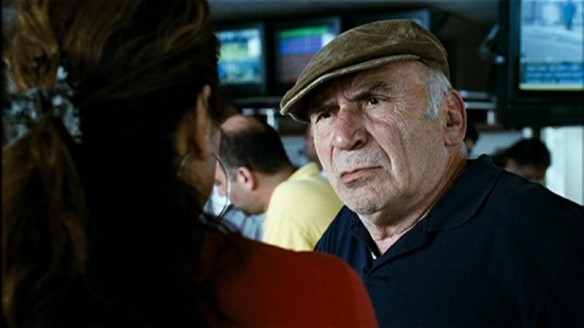 The one truth about life is that none of us survive it. Along the way to our inevitable destination we suffer bumps, bruises and sometimes whole amputations that make many of us, at one time or another, wonder if it’s possible to go another step. Yet it’s the joys, both large and small, that get us through the rough patches.

Ali (Kuritz) is an elderly Turk living in Bremen, Germany. He is alone; he is occasionally visited by his son Nejat (Devrak) who is a professor of German literature at a German university, but the two have only an uneasy connection. Neither one can really relate to the other, let alone understand one another. The gulf between father and son, already deep as with all fathers and their sons, is made wider by the cultural differences they grew up with. Ali is still at heart a Turk and Nejat is essentially a German.

Ali, being a lonely man, sometimes purchases himself a prostitute. One in particular, Yeter (Kose), is a favorite. She, like Ali, is a Turkish expatriate and is doing  the best she can to survive. She misses her daughter Ayten (Yesilcay) who is still in Turkey and is ashamed of her mother. Ayten is also a revolutionary whom the Turkish government is after.

Muslims in Bremen are not too thrilled with Yeter’s profession of choice and urge her, in no uncertain terms, to think about a career change or face the wrath of their community. Ali, discovering this, invites her to live with him so that she might continue to practice her profession (and this isn’t all altruistic – Ali wants her to provide her professional services in exchange for the room and board). It’s a pretty sweet arrangement for Ali but a momentary loss of control leads to a tragedy that has life-altering consequences for the both of them.

Nejat, horrified at what has occurred, travels to Turkey to find Ayten so that he may tell her what has happened and, if needed, do whatever he can to help. He is taken by his homeland which he has never seen and winds up impulsively buying a German-language bookstore in Istanbul which comes with two apartments over the store. He lives in one and rents the other to Susanne (Schygulla).

Susanne is a German mother who is in Turkey for her daughter Charlotte (Ziolkowska) who has travelled to Turkey for…well, let’s backtrack a moment. You see, even as Nejat had travelled to Istanbul, Ayten had fled to Germany to find her mom and to escape arrest. She hooks up with Charlotte, whose relationship with her mom is – you guessed it – strained. Susanne is an ex-hippie who went from that lifestyle to becoming a more bourgeois woman in order to provide for her daughter for which Charlotte has never forgiven her. Charlotte is fascinated with Ayten, whose status as a revolutionary on the run excites Charlotte’s sense of political romanticism. However, when Ayten is arrested, she is deported back to Turkey to be arrested. Charlotte goes to Istanbul to try and help Ayten be freed and then….life happens.

Akin, who was born in Germany to Turkish parents, presents a film with three distinct storylines. All of them are linked but ingeniously enough, none of the characters are aware of how closely linked they are. All of them crisscross their way through the various storylines without knowing their effect on each skein of the tapestry. This takes some pretty sophisticated writing and directing to pull off without throwing in serendipitous devices that exist only to move the plot from A to B. Here, you feel an organic flow and nothing ever seems forced.

The mood here as you can tell is somewhat bittersweet. None of these characters has easy lives or make the right choices in every case. They, as we alluded to earlier, suffer bumps, bruises and amputations and not all of them will be alive when the end credits roll. While the movie can get heavy-handed with the tragedies to the point where you want to scream “We get it! Life sucks! Let’s move on shall we” at the screen (or monitor if that’s your means of viewing).

There are some very nice performances. Many of the actors are well-known in Turkey but almost completely unknown here. Schygulla might be remembered by older readers as the muse of Rainier Warner Fassbinder, one of Germany’s legendary directors of the 70s and 80s. She lends some grace and gravitas to the movie and serves as the audience surrogate to a large extent. She is unfamiliar with Turkish culture (which we get a nice deep look at here) and navigates through a tricky emotional maze with her daughter.

This is the kind of film that will stay with you for a long time unless you’re the sort that don’t like to use a lot of grey matter when it comes to watching movies. There are a lot of themes to consider here, a lot of intellectual fodder for the engine. It is a film that sets out deeply drawn characters and allows them to interact and breathe. You’ll feel like you know all of them, see them at the market and run into them on the street for a 5 minute conversation about trivial things. But there’s nothing trivial about this film. Nothing at all.

WHY RENT THIS: An amazing, bittersweet mood. A look inside Turkish culture. Solidly acted.

WHY RENT SOMETHING ELSE: Heavy-handed in places, particularly in the Job-like suffering.

FAMILY VALUES: There is a great deal of sexuality, as well as adult themes, language and some violence.

TRIVIAL PURSUIT: Most of the police officers in the film are actual cops.

BOX OFFICE PERFORMANCE: $17.8M on an unreported production budget; looks like the film was a box office success.