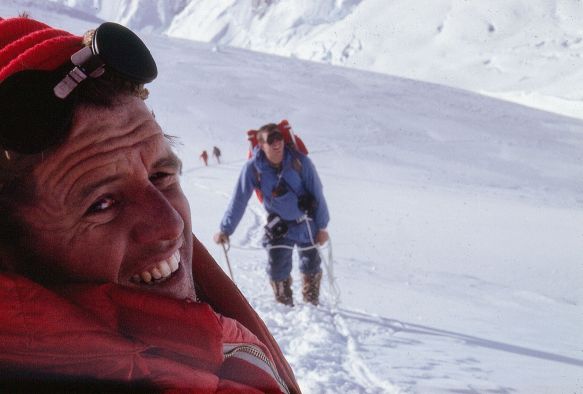 There are all sorts of ways to conquer peaks.

Often, we compare the greatest obstacles in our lives to mountain peaks. Scaling those peaks is used as a metaphor for overcoming those obstacles. Like our own limitations, the loftiest peaks are often the ones in our own mind; once we get around to climbing them, we find they aren’t so tall after all.

Bob Whittaker lived under an enormous shadow. His father Jim was the first American to scale Mt. Everest and was a national hero. He also co-founded the REI sporting goods chain and was the CEO there until he retired a few years ago. He is named for one of his father’s closest friends; Senator Robert Kennedy, the brother of the former President and former Attorney General during his brother’s administration.

In 1965, the tallest unscaled peak in North America was Mount Kennedy in Canada. As the peak was named for his brother, then-Senator Kennedy thought that it would be fitting if he were to accompany the first team to scale the peak. Even though he had no previous mountain climbing experience, the Senator was in safe hands as one of the leaders of the expedition was Jim Whittaker. It was there that the two formed a bond that would last until the Senator’s tragic assassination in Los Angeles just three years later. Bobby Kennedy’s son Chris speaks affectionately of Jim Whittaker taking on some of his late father’s duties, helping guide the young boy into manhood.

But Jim was away a lot during Bob’s childhood and the two grew estranged. Bob became a part of the grunge scene in Seattle in the 80s and 90s, becoming road manager for the indie rock legends Mudhoney. A somewhat wild and personable young man, he became the face of the Seattle scene for many. To this day he counts among his friends such luminaries as Eddie Vedder. Bob would eventually become road manager for REM for a dozen years before moving on to all sorts of other bands.

But rock music is a young man’s game and as Bob grew older, he began to pull away from the glamour of the music scene. He began to appreciate the joys of the wilderness. He became active in creating and maintaining green spaces in and around Seattle, and then in Washington state. Like his father before him, he became an avid conservationist and outdoorsman.

As the 50th anniversary of his father’s trek up Mount Kennedy with his good friend Robert Kennedy loomed, Bob began to think about that accomplishment and what it meant to his family. He decided that it would be a good opportunity to reconnect with his brother Leif, who had followed in his father’s footsteps and become a respected climber. Chris Kennedy was also invited and the son of the late Senator jumped at the chance even though he, like his father before him, had no mountain climbing experience.

The documentary tells the parallel stories of the two expeditions to the mountain in alternating fashion, entwining the story of the elder Whittaker and the late Presidential candidate with that of their sons. Legacy plays a big part in the movie’s theme; for all three of the men, their father’s achievements are inspiration to do something important with their lives. While at times it is a burden to them – as it is to most sons – it is also a source of pride to them as well – as it is to most sons.

The movie has almost a schizophrenic nature; there are the serene, wild places of the mountains and the Pacific Northwest and there’s the loud grunge, rock and roll excess of the music scene. Both make up different sides of Bob Whittaker and both are equally valid, even if he is emphasizing the mountains more than the music these days. It couldn’t have been an easy path from one to the other; it certainly isn’t the path most take in that direction but it seems to have worked for Whittaker.

But it isn’t Bob Whittaker’s movie alone, even if he is in most respects the central character. It is about family, first and foremost; for sons paying tribute to fathers. Its friends gone but not forgotten. It also gives us a glimpse at Bobby Kennedy and even as brief and superficial a glimpse as it is, it makes one sad to think of all the good he might have accomplished had he not been murdered for no real reason.

I don’t know that this is necessarily inspirational. I didn’t feel moved to recreate my father’s greatest triumphs by watching this but I was given a certain feeling, one of knowing that like Bob Whittaker, Leif Whittaker and Chris Kennedy, I’m walking in the footsteps on the trail my own father blazed. Being reminded of that may not necessarily set the world on fire, but it is important – and comforting – nonetheless.

REASONS TO SEE: Bob Whittaker’s enthusiasm is infectious. The stories from the first climb are fascinating.
REASONS TO AVOID: Loses a bit of focus during the last third.
FAMILY VALUES: There is some profanity and a bit of drinking.
TRIVIAL PURSUIT: Mount Kennedy lies in the St. Elias Mountain Range located in Kluane National Park, in Yukon, Canada. The peak was named for the slain U.S. President John Fitzgerald Kennedy in 1964 as a tribute by the nation of Canada.
BEYOND THE THEATER: Amazon, AppleTV, Fandango Now, Google Play, Microsoft, Vimeo, Vudu
CRITICAL MASS: As of 11/15/19: Rotten Tomatoes: No score yet: Metacritic: No score yet
COMPARISON SHOPPING: Free Solo
FINAL RATING: 7/10
NEXT: The Warrior Queen of Jhansi