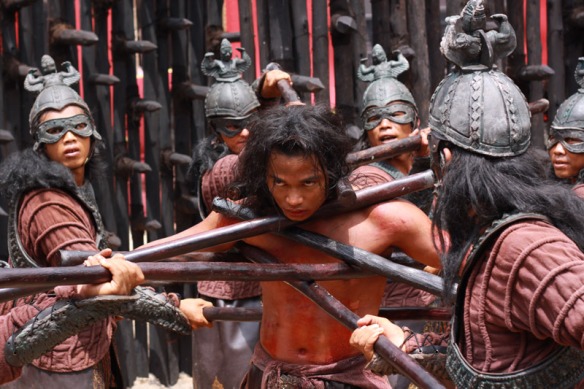 Tony Jaa doesn’t much like his new spear collar.

I’ll say it now and get it out of the way – Tony Jaa is one of the most charismatic and breathtaking martial arts stars in the world today. Maybe Jet Li and Bruce Lee in their heydays could keep up with Jaa, but nobody today can. The action sequences he does are done au natural – that is, without wires, CGI or any film trickery; when Jaa runs up the tusk of an elephant, he really does. When he bounces off a wall to kick an enemy fighter in the face, that’s all him. To watch him is to watch human endeavor at its best.

What Jaa really needs though is a writer and director who can give him something to work with. While the first film in the series had a good story and character development, the second film was a royal mess. In many ways this is a bit of an improvement – but still, at the end of the day, it doesn’t quite add up to a coherent whole.

Picking up where the previous film left off, Tien (Jaa) is now in the hands of the ruthless warlord Rajasena (Wongkrachang). Rajasena, you may remember, murdered Tien’s parents in front of him when Tien was but a child. Now we find out why – Rajasena has a curse leveled on him which prophesized that he would be killed by someone…ummm…no, that’s not it…by someone who…no, not that either. Okay, the explanation didn’t make any sense either. Moving on.

Rajasena has Tien beaten within an inch of his life. Rajasena watches this with the repulsive glee of a sadist, then as sadists will he grows bored an orders his men to kill Tien. Before they can behead him, an envoy from the king arrives with a pardon which irritates Rajasena no end but there isn’t anything he can do. Unfortunately, Tien has died from the severity of his beating so his body is taken to a small village where his old friend Master Bua (Sirichanya), who has joined a Buddhist monastery as a monk over the guilt he experienced for his actions in the previous film uses an ancient treatment regimen to help revive the late Tien who as it turns out wasn’t quite dead yet.

After being caked in mud for a bit, Tien emerges a little less inclined towards beating people up and learns from Bua and his fellow monks the tenets of peace, harmony and elephants; Buddhism seems to suit the new Tien but things are getting worse outside of the walls of the monastery. A new figure has emerged in the villain scene, one even nastier than Rajasena. He’ s Bhuti Sangkha (Chupong) who briefly showed up in the last film to kick Tien’s ass decisively (the only person to do that) and as it turns out, the movie is big enough for only one baddie with ambitions to rule all of Asia. Rajasena has to go and go he does, but not before levying a curse on Bhuti the baddie – from his severed head no less. Nobody can say these Thai filmmakers aren’t over the top.

This sets up a showdown between Bhuti and Tien because…well, because. Only one will walk away but can Tien who has renounced violence and nobody is really sure if he retained his martial arts skills (big hint – he did) can defeat the magically enhanced Bhuti.

The action sequences once again are worth it. Chupong is nearly as accomplished a martial artist as Jaa and the fight between the two may well become a classic confrontation for the genre. However the action bits are few and far between here; during filming of the first film Jaa had something of a breakdown which – and things are vague here – either was a result of financial issues during filming or caused them. Either way, he became a devout Buddhist and joined a monastery his own self following the conclusion of filming. It seems likely that Jaa wanted to impose his new-found pacifist beliefs on the films, which doesn’t really work well when your audience is expecting – nay, demanding – wall-to-wall ass kicking.

If anyone can pull it off, it’s Jaa and he comes close. His natural charisma and likableness make him one of the most compelling stars in Asia today (and yes, for those wondering, he has recently left the monastery and will be returning to acting on screens next year). Compared to the mish mash that was the last film, this is far easier to follow. If it weren’t for the gigantic lull in the middle, this might even compare favorable to the first film. However those who come to Jaa’s films for the action will find it light on that element although what’s here is memorable.

WHY RENT THIS: Fine action footage – when they get around to it. A bit more competent in the storytelling than the previous entry.

WHY RENT SOMETHING ELSE: Drags quite a bit in the middle for an action film.

FAMILY VALUES: Once again, the violence is pretty intense with this installment in the trilogy being a bit more bloody than the first two films.

TRIVIAL PURSUIT: Quite a bit of the footage in Ong Bak 3 was filmed during the production of Ong Bak 2: The Beginning; the delays in filming that project led to the decision to add a third film to the series with some of the completed footage moved to that film.

BOX OFFICE PERFORMANCE: $2.3M on an unreported production budget; while this probably made money, it was a disappointment compared to previous films in the series.

NEXT: The Matrix Revolutions