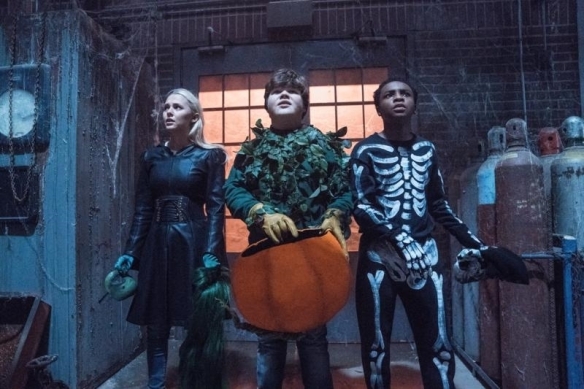 I always look askance at a young adult author whose book series is described as a “phenomenon.” The only audience more fickle than adults are kids. Phenomenons come and go with the regularity of Trump tweets.

In this sequel set in the universe of R.L. Stine’s Goosebumps series, two young would-be entrepreneurs (and middle school students) Sonny (Taylor) and Sam (Harris) unexpectedly find an unfinished Stine manuscript in a creepy old house and free Slappy, the malevolent ventriloquist dummy (voiced by Mick Wingert) is brought to life. At first, all he wants is a family of his own, which makes Sonny’s big sister Sarah (Iseman) suspicious although their single mom Kathy (McLendon-Covey) is blissfully unaware that the dummy is sentient. When Slappy is ultimately refused, he decides to get himself some revenge – by using his magic to bring to life Stine-influenced Halloween decorations and turn the sleepy upstate New York own into perpetual Halloween.

The movie doesn’t compare favorably with the first one; although Black (as author R.L. Stine) is in the film, he doesn’t show up until the very end in what is a glorified cameo, although he does set up a Goosebumps 3 should Columbia elect to make one. A little more Black would have gone a long way, but to be fair he was busy making a competing film and was unable to participate fully in this one.

That leaves us with the kids to carry the film and quite frankly that’s not something they’re capable of quite yet. Their performances are inconsistent and frequently wooden. Still, the movie does okay thanks to some fairly nifty special effects and the character of Slappy who makes a delightful villain for the younger set.

REASONS TO SEE: Slappy makes an outstanding kidflick villain.
REASONS TO AVOID: A little bit too much like the first.
FAMILY VALUES: There are mildly scary sequences, rude humor, some light profanity, and images of monsters and creatures.
TRIVIAL PURSUIT: Jack Black and Madison Iseman were both in Jumanji: Welcome to the Jungle but unlike here, they didn’t share any screen time together.
BEYOND THE THEATERS: Amazon, AMC On Demand, AppleTV, Fandango Now, Google Play, Microsoft, Movies Anywhere,  Netflix, Redbox, Vudu, YouTube.
CRITICAL MASS: As of 1/29/20: Rotten Tomatoes: 48% positive reviews: Metacritic: 53/100.
COMPARISON SHOPPING: The House With a Clock In Its Walls
FINAL RATING: 5/10
NEXT: Afterward