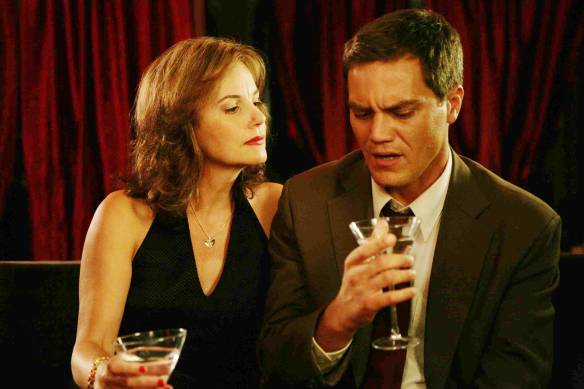 Nothing is cooler than a dick, a dame and cocktails.

There’s something to be said for a good noir film with a rumpled gumshoe on a tarnished quest, beautiful dames in dimly lit bars and plenty of cigarettes and martinis.  Not only is it a throwback to a simpler bygone age but in many ways it’s as American as a cowboy movie – although the Europeans (particularly the French) have proven themselves quite adept at the genre as well.

John Rosow (Shannon) is just such a private detective but Phillip Marlowe he ain’t. He does have rumpled down real good though. Anyway, he’s just kind of squeaking by and he fills his down time which there is plenty of with booze. Then he gets a phone call and a job – to board the California Zephyr train in Chicago and keep tabs on a man named Harold Fullmer (Wood).

The more Rosow follows Fullmer, the more suspicious he becomes – although that suspicion is tempered by frequent trips to the bar car. Fullmer isn’t necessarily who Rosow thinks he is and Rosow realizes that there is a connection between he and Fullmer that is unexpected – but crucial. This will lead Rosow to a moral dilemma that has no real right answer – just choices to be made.

Like any good detective story, the devil is in the details so I’m being a bit vague in my description of the plot. The Missing Person isn’t a traditional noir in the sense that there’s sex and violence a’plenty, but it is more noir in mood and convention. This is a modern noir, very much a product of the last half of the first decade of the 21st century but it has the DNA of a Raymond Chandler novel buried deep within.

Shannon has become one of the better actors in Hollywood; he’s as versatile as they come and while he may have a face only Willem Dafoe could appreciate, it’s an expressive face as well. John Rosow is a lost soul adrift in a post-9/11 world that he doesn’t quite understand. The drinking is to relieve the pain of loss and at unexpected times Shannon allows that pain to come to the surface and it can be devastating when he does.

Buschel doesn’t mind quietly poking holes in the whole noir ethos (tall characters bump their heads on ceilings and other moments of transcendent but very real silliness) but he has enough respect for the genre not to make fun in a snide way, more like the affectionate joshing of old friends. While he chose to make his characters more like kids dressing up in adult costumes and play-acting in many ways, the movie is anything but childish. In fact, it’s more adult than a lot of movies out there in that it carries a moral complexity that requires the viewer to examine his or her own moral compass in regards to Rosow’s conundrum. Sounds like a mathematical formula, doesn’t it?

In any case, this is mighty fine viewing but do be warned – it can meander in places, particularly in the middle third of the film. There were times I got the impression that Buschel himself wasn’t entirely sure how to move the film from point D to point E and the plot flounders when that happens. However lovers of old fashioned detective stories who like their stories hard-bitten with an intelligent chaser will be delighted to discover this one.

WHY RENT THIS: A nice juxtaposition between noir conventions and modern pop culture. Shannon gives a bravura performance.

WHY RENT SOMETHING ELSE: Never seems to know what direction its going in.

FAMILY VALUES: There’s some foul language, a smidge of violence and sexuality and plenty of scenes of drunkenness.