Ridley Scott returns to the Alien franchise with an all-new prequel to the original. A colony ship, the Covenant, is on its way to a planet across the galaxy and thought to be paradise. However when they arrive they find the planet strangely devoid of animal life and a previously unknown spaceship crash landed on the surface. As you can imagine, it doesn’t take long for them to realize that there is a life form on the planet, something entirely malevolent and that they will be in for the fight of their lives to escape.

(Well Go USA) Rami Malek, DJ Qualls, Lin Shaye, Kate Lyn Shell. A troubled man hides from the authorities in summer homes to avoid the cruel winters of Montana. Estranged from his family, his encounter with a conspiracy-obsessed drifter left him in a state of paranoia, preparing for an event known only as “The Inversion.” How much of his paranoia is real and how much is a product of his imagination is anyone’s guess. This played last month’s Florida Film Festival to much acclaim.

Diary of a Wimpy Kid: The Long Haul

See the trailer, clips, interviews, a featurette and B-roll video here.
For more on the movie this is the website.
Release Formats: Standard
Genre: Family Comedy
Now Playing: Wide Release
Rating: PG (for some rude humor)

(Warner Brothers/MGM) Amandla Stenberg, Nick Robinson, Anika Noni Rose, Ana de la Reguera. A beautiful young girl with an auto-immune disorder has spent her entire life in a hermetically sealed home. The slightest contact with the outside world could prove fatal. Dreaming of one day seeing the ocean with her own eyes, she falls in love with the new boy next door. Together, the two scheme to risk everything for that one perfect day – that could cost them both everything.

(The Orchard) Jeremiah Tower, Anthony Bourdain, Mario Batali, Martha Stewart. Tower is one of the most influential chefs of his time. Bourdain, a friend and admirer of Tower, produced this documentary which not only explores the life of the chef but also of the forces that shaped his culinary journey and not only  changed his life but also the way all of us see dining in general. 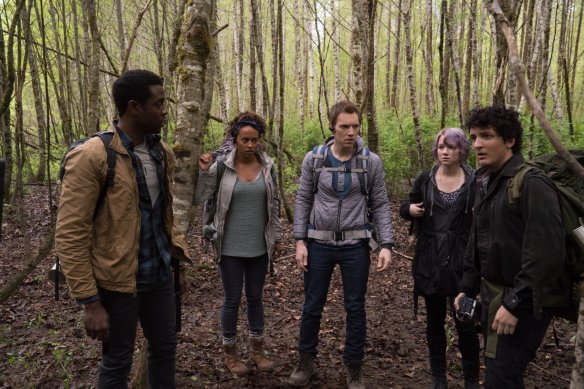 Don’t go into the woods; you’d think they’d have learned that by now.

After a sixteen year absence in the franchise, we return to Burkittsville to further explore the secrets of the legendary Blair Witch in this follow-up to the original Blair Witch Project which somewhat tellingly ignores the events of Blair Witch 2: Book of Secrets. The filmmakers were so determined to keep this sequel a secret that they didn’t reveal the title of the film until the San Diego Comic Con, just two months before it was to be released. Like the original, that was genius marketing but would that translate to a good movie?

James Donahue (McCune), the little brother of the Project’s Heather, is in a bit of a tizzy. Some footage discovered in the woods near Burkittsville has yielded an image that might just be his long lost sister. With a trio of friends – Lisa (Hernandez), Peter (Scott) and Ashley (Reid) in tow, he heads out to Maryland to talk to the two bloggers who found the footage – high-strung Lane (Robinson) and super-cool Talia (Curry). The bloggers agree to lead James and his filmmaking crew to the spot where the footage was found.

Of course, immediately they get lost. Their GPS becomes unreliable. Their drone begins to function erratically. The four filmmakers know very little about woodcraft and they bicker with the locals who are only slightly more experienced. Then some strange figures made of sticks start appearing in their camps and as things become more and more twisted, time itself becomes something that can’t be counted on.

As people start disappearing, it becomes clear that something malevolent is at work in the Maryland woods and that the mysterious building that doesn’t show up on Google Earth that appears suddenly out of the rain has something to do with it. But is this the home of the notorious Blair Witch or part of something even more sinister?

All the ingredients were here for something special; a talented up-and-coming horror director, a legendary franchise and a studio eager for a hit to re-launch that franchise. Certainly the way Lionsgate has handled the marketing for the film has been innovative and respectable. They’ve gone the minimal “less is more” path in order to generate interest while giving the project an air of mystery.

Sadly, the movie doesn’t live up to the marketing. There’s a lot of inconsistency regarding the found footage trope; at times that’s what Wingard seems to be going for but then at others we get what is clearly standard filmmaking with all of the characters in camera view. It’s annoying as all get-out as the point of view changes constantly and without warning. There are also plenty of the kind of horror cliches that drive me bonkers about horror movies – namely a bunch of young people in a scary situation doing things rational human beings would never do. Of course, frightened people can do irrational things, but even people who are terrified might not necessarily do the things the kids do here.

That isn’t to say that there aren’t some genuinely creepy moments. Wingard manages to generate an atmosphere that is ripe for some really spooky stuff and we occasionally get them. Kudos also go to the audio crew who generated an awful lot of legitimate scares solely with sound. Sound can be even scarier than sight upon occasion.

The acting is okay, albeit not stirring. The characters however are written mainly as archetypes rather than real people. James comes closest to being relatable but at times he can be a real schmuck. I will say that this could be the ultimate millennial horror – being lost in the woods with failing tech. Horrors!

The movie’s ending also purports to reveal some insight into the nature of the Blair Witch but as it’s meant to generate more questions than answers, it ends up being kind of maddening to say the least. We do at least get to find out why the characters at the end of the original were facing the corner. There is clearly room for a sequel, albeit one with any members of the Donahue family likely to be involved…unless there are cousins waiting to search for Heather and James.

REASONS TO GO: There are some freaky scary moments.
REASONS TO STAY: It’s a bit of a yawner most of the time.
FAMILY VALUES:  The atmosphere is plenty spooky, there is a fair amount of profanity and some of the images are disturbing to say the least.
TRIVIAL PURSUIT:  Filming was done in British Columbia rather than in the original Burkittsville, Maryland location in order to keep it quiet that a sequel to The Blair Witch Project was being filmed.
CRITICAL MASS: As of 10/13/16: Rotten Tomatoes: 35% positive reviews. Metacritic: 47/100.
COMPARISON SHOPPING: The People Garden
FINAL RATING: 5/10
NEXT: Snowden