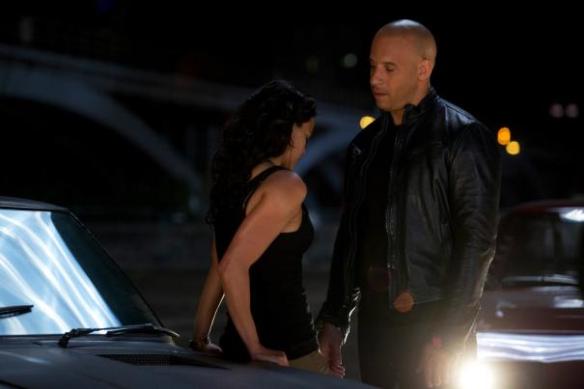 Vin Diesel is heartbroken to discover that Michelle Rodriguez looks better in a wifebeater than he does.

I’m not much of a car person. I seriously couldn’t tell a carburetor from an alternator. When I go car shopping, I look for dependable. I drive a Honda for god’s sakes.

Which would probably make the characters in this film franchise squirm in horror. Any one of them could rebuild an engine of a Ferrari with parts from a Camry with their eyes closed and half asleep. And can they drive? Hoo lawd! These gals and fellers could put a 12-wheeler through a doggie door in a steel house at 90mph. And this series has thrived on people who think that kind of thing’s cool.

In the sixth installment of the series, the members of the crew are living large internationally after their big score in Rio. However, things never stay quiet for long for these guys. Hobbs (Johnson) shows up at Dom’s (Diesel) door, not particularly welcome. Even less welcome is Hobbs’ request that Dom’s crew reassemble to nab an international bad guy who is out to assemble a super-weapon out of component parts. After all, as Dom is happy to point out, they’re all retired from the game.

But Hobbs has a wild card to play – a photo of Letty Ortiz (Rodriguez), Dom’s girlfriend who apparently was murdered in Fast & Furious. Nope. Like at least one other character in the series, she shows up from the dead (albeit with no memory) but as one of the crew of said Eurobaddie, Owen Shaw (Evans). This is all the incentive Dom needs. Family is family, after all so he puts out some calls.

Those phone calls find Brian (Walker) and Dom’s sister Mia (Brewster) as new parents, Roman (Gibson) and Tej (Bridges) living the high life in Spain, Han (Kang) and Giselle (Gadot) living together in Hong Kong. They agree to help Dom bring Letty back, but Dom wants more – pardons for everyone so that they can go home again.

While Mia and Dom’s new squeeze Elena (Pataky) stay home to guard the baby, Hobbs and his new flunky Riley (Carano) join up with the crew in London to see if they can catch the guy who has eluded Hobbs for years. But the stakes are sky-high, Shaw’s team is as skilled as Dom’s only more vicious and Letty can’t remember Dom at all – in fact the first time they meet face to face she shoots him. This isn’t like any other job; they will be betrayed from within and more than one member of Dom’s team won’t come back from this.

Now, I want you to understand something up front – this isn’t reality at all. There are car stunts that defy gravity, plot points that defy logic and human bodies getting beat up so bad that they defy death. Da Queen and I were consistently making the “jumping the shark” signal to each other (an inverted V on one hand with two fingers on the other making a parabolic arc over the first) throughout the movie. And you know what? It didn’t matter. As ludicrous as this movie often is, it doesn’t matter – the entertainment quotient is so sky high that you ignore these lapses and just enjoy the ballet of man, machine and road.

Vinnie D and the Rock are both fairy limited at this point in their careers in terms of acting ability. That isn’t a knock or a criticism, they both I think understand what their comfort zone is and tend to stay well within it. While that may make for some fairly one-dimensional performances (and occasionally have) they are both also highly charismatic so their own personalities tend to inflect themselves on their characters. It so happens I like hanging out with these guys (or would if I knew them personally) so that isn’t a bad thing at all.

There’s a lot of posturing, a lot of attitude and some great stunts and car chases. While there is a nod to the underground racing roots of the series, the franchise is way beyond that now which is a very smart move – I think the car racing thing got old after the first one and they’ve really allowed themselves to appeal to more than a niche audience, which explains that their highest box office numbers have come with the last two films.

There is a cut scene at the end that you should hang out for – it explains one of the most notorious continuity lapses in the series and introduces a surprise new character in one of the great twists you’re ever going to see in a cut scene (up there with the reveal of Thanos).

This is great summer entertainment and has helped make a solid opening to the 2013 summer blockbuster season. There is definitely a Fast & Furious 7 in the works (already scheduled as of this date to open on July 11, 2014) which the cut scene sets up. As much as a non-car person that I am (as delineated above) and as much as I was disinterested in the series for the first four movies, the last two have made me a fan and I can’t wait for the next one.

REASONS TO GO: Varies the formula from the first two movies nicely while sticking to the things that made the first movie great. More Jeong is never a bad thing.

REASONS TO STAY: Scattershot much more than the first two films.

FAMILY VALUES:  Plenty of violence and automotive mayhem, some swearing and a bit of sexuality..

TRIVIAL PURSUIT: Michelle Rodriguez didn’t have a driver’s license when the series first started and only obtained one after filming began on the first film in the franchise.

CRITICAL MASS: As of 6/2/13: Rotten Tomatoes: 72% positive reviews. Metacritic: 61/100; critics surprisingly have gotten behind this one.