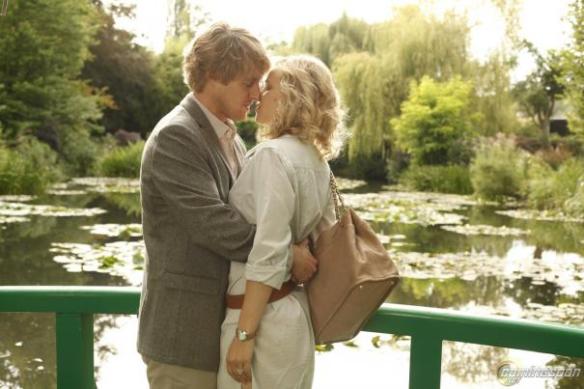 Ahh, the romance and magic of Paris!

Paris is a place that embodies romance. When we think of the city, that is one of the first adjectives that springs to mind. Paris – City of Light, city of love. There is an ineffable magic to Paris; it is the city once prowled by Hemingway, F. Scott Fitzgerald, Picasso, Toulouse-Lautrec, Victor Hugo, Gaugin, Matisse, Luis Brunel, Gertrude Stein, Billie Holliday and Duke Ellington. It is the home of the Louvre, the Eiffel Tower, the Arc de Triomphe, the Champs d’Elysee. It is a city made to enchant and ensnare the visitor.

Gil (Wilson) feels their presences quite keenly. He is a Hollywood hack writer, known for successful but ultimately empty screenplays that have made him rich but haven’t fed his soul. He is in Paris vacationing with his fiancée Inez (McAdams) and her Tea Party parents John (Fuller) and Helen (Kennedy). There they run into Paul (Sheen), a former beau of Inez, a know-it-all who like many of that sort generally know nothing. He precedes nearly every thought with “If I’m not mistaken…” which, as we all know invariably means they are.

The others are tourists in a place that they have no emotional connection to; Gil loves Paris, particularly the Paris of a bygone age. He pictures it after dark, a soft rain falling. He goes for midnight strolls around the streets of the city. After one, he is resting on some marble steps near the Pantheon, not quite sure where his hotel is when an antique car pulls up alongside him and a young couple gesture for him to join them. That’s where the magic and romance truly begins.

I’m being deliberately vague about the rest because I don’t want to spoil the surprise of the movie. This isn’t your typical Woody Allen movie – there are no neurotic New Yorkers to be found here. Instead, this is more akin to movies like Purple Rose of Cairo and Play It Again, Sam – movies that have an element of fantasy and romance to them.

Woody Allen, despite all his jokes to the contrary, is deeply romantic at heart. He believes in magic and destiny, points that are made in nearly every one of his movies. He also requires a certain amount of literary awareness of his audiences and the references here are many and varied; from the manliness of Hemingway, to the rough-around-the-edges kindness of Gertrude Stein to the self-promoting whimsy of Dali.

He has some comments for the cultural insensitivity of Americans, and the tendency for us to wish we lived in a Golden Age when Things Were Better. He makes the point that those who lived in that time were in all likelihood thinking that things might have been perfect at some previous era to that. Maybe cavemen thought wistfully that things were so much simpler back when they were Cro-Magnon.

Wilson makes a nice surrogate Woody, having naturally some of the inflections and cadences of Allen at the peak of his game in the 70s. He has always been an amiable sort onscreen and that easygoing charm serves him well here. Cotillard, one of the most beautiful and talented actresses working today, plays a love interest in the movie that catches Gil’s eye. Also of note is the French first lady who plays a tour guide at the Rodin sculpture garden (where she runs afoul of know-it-all Paul) and Brody who plays a famous Spanish artist with over-the-top panache.

I’m not a big Woody Allen fan, particularly lately when his movies have been extremely uneven in quality. This is by far his best movie in decades, clearly one of the best movies he’s ever made. I don’t know if it is the change in location that has inspired him but if so, let’s see him do some movies in Tokyo, New Orleans, Montreal and Barcelona. He’s definitely an acquired taste that I haven’t acquired – until now. I will admit that my view is colored by the fact that in less than two weeks my wife and I will be taking a vacation in Paris so seeing the places we’ll soon be haunting ourselves gave us a special thrill. Nonetheless, this is wonderful filmmaking, bringing back the magic and romance that movies used to bring us in massive doses – and seems to be so rare and precious today.

REASONS TO GO: As charming a movie as you’ll ever see. Perfectly captures the romance and magic of Paris. Allen’s best in decades, maybe ever.

REASONS TO STAY: You’re a big Woody Allen fan and you think Play It Again, Sam and The Purple Rose of Cairo were his worst films.

FAMILY VALUES: There are some sexual references and quite a bit of smoking.

TRIVIAL PURSUIT: The flea market scenes were filmed at the market on the days it was normally closed with crew members and extras dressing the stalls for filming, then restoring the market to its normal appearance when filming was done.

HOME OR THEATER: This should be seen in a darkened theater with a big tub of popcorn and a soda; the magic of Paris combined with the magic of the movies.

TOMORROW: And Soon the Darkness