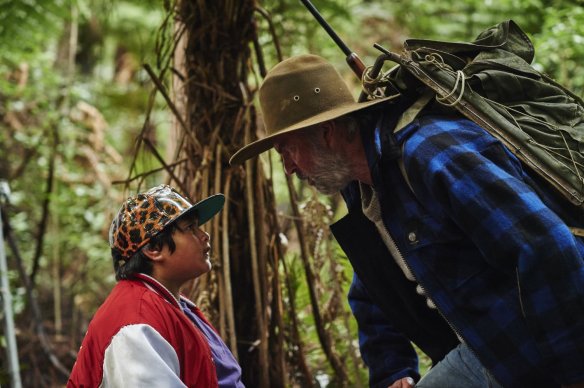 An odder couple you will not find.

Kids aren’t always easy fits. They aren’t always little darlings. Some have had a tough go of things and they don’t always behave like angels. They act out. They lash out. That doesn’t necessarily make them bad kids though.

Ricky Baker (Dennison) is a kid just like that. After his mom gave him away, he has been shuttled from foster home to foster home. Each time he ends up back in the hands of child services and Paula (House), his exasperated case officer. Ricky has one more shot – out in the sticks with Bella (Wiata), a kind-hearted woman living on the edge of the bush with her husband, curmudgeon Hec (Neill) who clearly wants nothing to do with Ricky – and for whom the feeling is mutual.

Circumstances arise that force Ricky and Hec to go fleeing into the bush with the incorrect assumption that Hec has somehow abused Ricky (mainly due to the surprisingly naive Ricky himself) and that due to circumstances, Ricky will be remanded to juvenile jail until he turns 18 as he has used up all of his foster care opportunities. The two become the object of a massive manhunt, becoming a major news story in New Zealand and the two become folk heroes.

With the relentless Paula chasing them and bounty hunters on their tail, it will take all of Hec’s bush knowledge to keep the city-bred hip-hop loving Ricky safe. And all of New Zealand seems hell bent on capturing the two and sending them both to their respective jails.

From the co-director of the wonderful What We Do in the Shadows, this is one of those movies that either the humor will appeal to you or it won’t. For me and Da Queen, it definitely did. There’s a scene early on of Bella killing a wild boar which won’t sound funny on paper, but had me in stitches. Comedy gold, I tell you.

Sam Neill, who has been around for quite awhile, puts in what just might be his best performance ever here. It’s not that Hec is just grouchy; he has to deal with all sorts of emotions, including some tender ones, during the course of the film. I’ve always liked Neill, going back to his turn as an adult Damian in The Omen III to his work in Jurassic Park and one of my favorites, The Hunt for Red October. This is the movie that fans of this actor should make a point of seeing.

Also, mention must be made of Julian Dennison as Ricky Baker. This is a young actor who has amazing comedy chops. He is blessed with a script that doesn’t descend into chintz or shtick, nor does it unduly play off of Dennison’s size (he’s overweight as you can see from the picture). Yet they don’t make him a laughingstock, as the movies often do with portly kids. That’s a good thing to see, but as well, Dennison nails his role and makes Ricky Baker a memorable character. That’s not an easy thing to do in a film like this.

The scenery is beautiful – New Zealand came by its reputation as one of the most beautiful places on Earth honestly. The soundtrack is also chock full of some terrific Kiwi pop songs that will keep your toes tapping throughout. There literally is nothing not to like about this movie.

Okay, maybe one thing. Some of the humor might be a little more over the top than some American audiences are used to. There’s a character played by @Midnight favorite Rhys Darby named Psycho Sam who lives up to his name. His presence derails the movie a little bit even though Darby does a fine job. It just feels like the character came in from another movie.

Otherwise, this movie rocks from beginning to end. It’s funny, sweet and like Ricky himself has a heart of gold under all the bluster. Definitely one of the finer movies to be screened at the Florida Film Festival this year. It’s out and about the country right now, doing a walkabout of its on in American theaters. Catch it at one while you still can.

REASONS TO GO: Much funnier than I was led to believe it was. The soundtrack is abso-bloody-lutely terrific. Majestical scenery.
REASONS TO STAY: May be a little too out there for some.
FAMILY VALUES: A bit of foul language and some violence.
TRIVIAL PURSUIT: In the birthday scene, ten takes were filmed of the cast singing “Happy Birthday” to Ricky until someone realized that they didn’t have the rights to use the song. Therefore, the actors made up a new song on the spot, the one which appears in the film (and also partially in the trailer).
CRITICAL MASS: As of 7/1/16: Rotten Tomatoes: 100% positive reviews. Metacritic: 80/100.
COMPARISON SHOPPING: Buddymoon
FINAL RATING: 9/10
NEXT: The American Experience begins!

Even a hockey setting couldn't save this movie.

The belief of a child is precious and powerful at once. Attacking that belief – whether it is in the infallibility of its parents, or the existence of Santa Claus is a profound turning point in their lives.

Derek Thompson (Johnson) is a goon on a minor league hockey team in Lansing, Michigan who has garnered the nickname of “Tooth Fairy” for all the dental work he’s sent opposing players for (although I have to point out that no self-respecting hockey player would have a nickname that contained the word “Fairy”).

Off the ice he’s an affable enough sort, although he’s a bit of a self-centered jerk. His girlfriend Carly (Judd) has two kids that he has trouble relating to. Randy (Ellison) is a sullen teenaged annoyance who gets what little pleasure he gets out of life from his music. Tess (Whitlock) is a bit of a dreamer and Derek, who has been jerked around by life, having never had the talent to go very far in the game he loves, tells her that there’s no tooth fairy and even steals the money from under her  pillow. Now that’s a douchebag. It also gets him the heave-ho from the only good thing in his life – his relationship with Carly.

Well, the powers that be hear about this and boy, are they miffed. Derek is sentenced to spend a week as a tooth fairy (apparently there are a whole bunch of ‘em) in penance for trying to attack the belief of a child. Those powers that be, they don’t mess around.

There Derek meets Lily (Andrews), the head fairy which is kind of an executive position as it turns out; Tracy (Merchant), an adenoidal fairy without wings who is Derek’s case worker, and finally Jerry (Crystal), a kind of Q Division fairy who gives Derek all sorts of gadgets such as a horn that scares off cats and a shrinking potion. These fairies, they’ve got a hell of an R&D department.

At first Derek is just there to serve out his time and doesn’t take much care in doing his job properly until he begins to learn what tooth fairies mean to kids…and what kids mean to them. The arrogant, selfish Derek begins to morph into a kinder, gentler Derek. But is it too little, too late?

After a promising start in action films, Johnson moved into family-friendly movies like this one. He’s become quite a staple in them and his easygoing personality make him a natural, plus his notoriety as a former WWE wrestler makes him even more kid-friendly. I like Johnson in roles that utilize his comic abilities, but his formidable skills as an action hero have been seriously missed.

He’s got a pretty decent cast behind him; Andrews and Crystal certainly perform as advertised, but their roles are brief and are in fact little more than cameos (Crystal goes uncredited in the film). Merchant has a more sizable role but his eager beaver caseworker comes off a little too forced, a little too bland.

Frankly, I’m surprised Disney didn’t snap this up; they’ve made these sorts of movies for decades and nobody does it better than they do. I think the movie could have used the Disney touch a little bit; still, Johnson is just so damned likable that you can’t help but like him in the movie, even though he’s a bit of an arrogant prick for much of it.

Kids will probably love the movie for the whimsy shown with the tooth fairies and some of that is actually pretty fun. Unfortunately, even the charismatic Johnson can’t save this movie from an overabundance of kid flick clichés.

WHY RENT THIS: The Rock on ice. Need I say more? Also some nice cameos from Crystal and Andrews.

WHY RENT SOMETHING ELSE: Typical family fare that Disney does so much better

FAMILY VALUES: There are a few mildly bad words and a bit of rude humor on the family-friendly side.

BOX OFFICE PERFORMANCE: $112.3M on a $48M production budget; the movie was profitable.